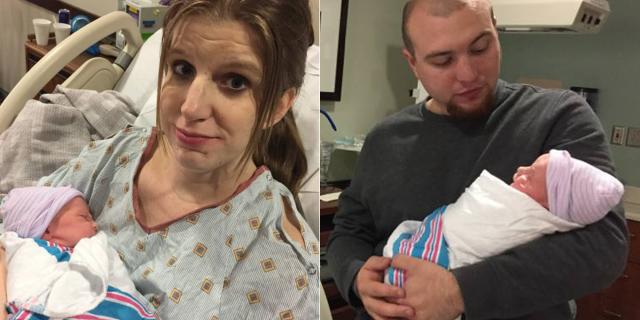 From Cosmopolitan
When Jean Luc Montou took to Facebook to announce the birth of his newborn son Julian on May 9, he also make the devastating announcement his partner Sarah Bertrand, 29, died just 24 hours after giving birth. Bertrand’s story has gone internationally viral since Montou’s original May 11 post.
Bertrand’s death was completely unexpected - she’d had a healthy pregnancy (as she did with the couple’s other child, a 3-year-old girl), but she likely developed a blood clot during labor that quickly turned into a pulmonary embolism, which killed her, doctors told Montou after her death.
“My last 24 hours with her was the happiest I'd ever been. I'm not sure why, but I've never been allowed to be past a certain point of happiness. I loved this woman like no other and she died in front of me while I held our son,” Montou wrote.
He’s been continuously posting gut-wrenching updates to Facebook, sharing pictures of Bertrand right after giving birth and of their two children, saying they are the only things keeping him going at this time.
He told PEOPLE: "I had never seen her so strong, so confident, and so joyful as when she held her new baby boy,” and that “While she will be missed so much, I want to honor her memory by raising Julian to be the best man I can make him, but it will be so hard with her sudden loss.”
Bertrand was buried next to her father on the 16th. “It still stings deep, it still feels unfair, and I still feel so helpless without her. The world is definitely a dark place without Sarah for us,” Montou wrote on a GoFundMe of burying his partner.
The fund is dedicated to paying Bertrand's funeral expenses and medical bills. You can donate here.
Related:
Watch news, TV and more Yahoo View, available on iOS and Android.
Follow Tess on Twitter.
You Might Also Like