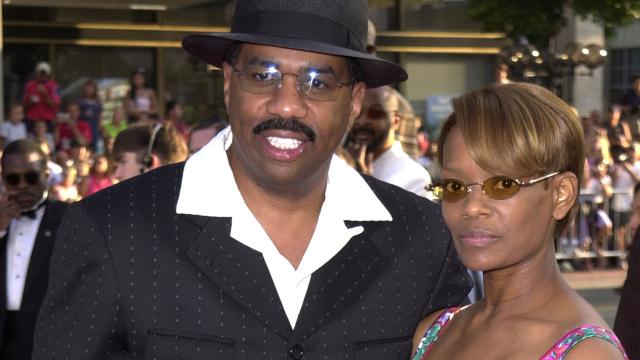 Steve Harvey is facing a number of allegations leveled against him by his ex-wife, Mary L. Vaughn, in a lawsuit filed against the host on Wednesday, yet another legal dispute following the couple's bitter divorce more than a decade ago.
Vaughn, Harvey's second wife, is suing the TV personality for $60 million, claiming that during their marriage, which lasted from 1996 until their contentious divorce in 2005, she was allegedly subjected to "prolonged torture with the infliction of severe mental pain and suffering," according to court documents obtained by ET.
WATCH: Steve Harvey 'Tearful' in Production Meeting After Leaked Memo, Did Not Attend Wrap Party
The documents also claim that Vaughn "attempted suicide by self-medicating [in] an effort to stop the pain," and allege that Harvey and his attorney caused "severe emotional distress" that led to a litany of medical conditions for Vaughn and her immediate family over the last 15 years.
Additionally, Vaughn is suing for alleged child endangerment, torture, kidnapping, breach of contract, conspiracy against rights, intentional infliction of emotional distress, and "soul murdering." The lawsuit also makes further claims of harassment, brainwashing and theft by deception.
Vaughn's suit was filed by Essie Berry, a civil rights activist and not an attorney. The documents were filed "In Pro Per," which means the plaintiff would be representing themselves, and Berry is acting as Vaughn's power of attorney. TMZ first reported news of the lawsuit.
WATCH: 7 Most Expensive Celebrity Divorces
ET has reached out to Harvey's reps for comment.
Harvey and Vaughn had one child together, Wynton Harvey, born in July 1997. Vaughn has previously aired her various grievances with her ex-husband on YouTube and was jailed for 30 days in 2013 for contempt of court after violating the terms of a gag order in the couple's divorce.
Prior to his relationship with Vaughn, Harvey was married to Marcia Harvey for 14 years. They share three children -- daughters Brandi and Karli and son Broderick.
After Harvey and Vaughn's tumultuous divorce was settled in 2005, the Family Feud hoststruck up a relationship with his current wife, Marjorie Elaine Harvey, whom he married in 2007.
WATCH: Hollywood's Most Nuclear Divorces
Related Articles