desperate people do desperate things and it usually ends up costing in the end .....mostly their lives

I have  said it now and  will say it  again ,for every smart guy there are thousands that  are  going to to be exploited by people  like him or  her.
Hence my title desperate people ,do desperate things.....usually at the  cost of themselves ,or their loved  ones .....i am not the most sympathetic,person alive ,but,you have to know  when you  give a  guy money and you end up on a  shit raft ,you are in trouble ...if you do not realise  ...you are  either  on a  suicide  mission ,or you are  completely uneducated  and have  never   seen a proper  sea going vessel in your  life ....
Apparently the smugglers charge  about a  thousand  dollars  for  a sail into  death ...and if you  have  only  500 bucks you are  down in the engine  room ....which  is still  to these  folks  a lot of  money  .....now they must be   fucking idiots mixed  with  desperation  ...because if you have a  gram of  smarts  you  must  know  when you are getting  fucked ...especially  when you   get   put in an  engine  room  to  be  BBQ'd...i think  these  people  escaping have  not even  read a  book  or  seen a  decent boat ...boat  what other  things  would lead  me  to being suspicious  is when i  board a boat   i do   not want to  see   700 other   fucking idiots  like me .....going to the  same  fatality ....i have said this now and will repeat it   till i am  gone in the wind ....as long as their  are  takers  their are givers  ,,,,filling a market for  stupidity .....whatever the  takers  take ...there will be  givers to supply that  demand ....its nothing  personal its  a business, i am not a sympathetic  individual,but i cannot tolerate   stupidity and  desperate situations ....all  of  which is  avoidable .most people  put themselves into these  situations  however ....the other  day a  women was  complaining about  how  she is  struggling at  wal-mart  to make  ends  meet ,she  mentioned  however ...she has  5 kids  by  5  different men ......you think she  might have  kept her legs  closed  or   say, maybe  used  a  condom,this is my point ...there will always  be people like wal-mart or situations  where the  desperate  get  taken advantage  of  simply  by  demand and  supply ........

By Fanny Carrier with Angus MacKinnon in Rome15 hours ago 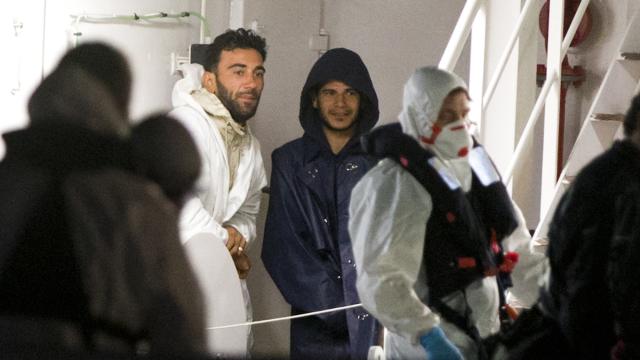 CBS News
Catania (Italy) (AFP) - The Tunisian captain of a migrant boat in which 800 people are feared to have drowned is set to be charged with causing the Mediterranean's deadliest disaster in decades.

Prosecutors in the Sicilian city of Catania said Tuesday they believed Mohammed Ali Malek, 27, was responsible for steering mistakes and the reckless overcrowding which led to the horrifying shipwreck off Libya on Sunday.
He will appear before a judge on Friday along with crew member and Syrian national Mahmud Bikhit, 25, who was also arrested in a probe into a catastrophe that has evoked chilling comparisons with the slave trade, and allegations of callous disregard on the part of European governments.
The captain was questioned by investigators Tuesday after being arrested on suspicion of culpable homicide, causing a shipwreck and aiding illegal immigration. Bikhit faces potential charges on the latter count.
Hundreds of the victims, including an unknown number of children, will have died in hellish circumstances having been locked in the hold or the middle deck of the 20-metre (66-foot) boat which keeled over in pitch darkness after colliding with a Portuguese container ship answering its distress call.
The Catania prosecutors said the collision had been caused by steering mistakes by the captain and the panicked movements of the hundreds of passengers.
"On the basis of what has emerged, no blame can be accorded to the crew of the merchant ship which came to rescue and in no way contributed to the fatal event," they said in a statement.
View gallery

A rescuer cradles a child in the Sicilian harbor of Pozzallo, Italy, early Monday, April 20, 2015. A …
Italian Prime Minister Matteo Renzi has described the traffickers who packed their human cargo into the boat as akin to 18th-century slave traders.
Prosecutors said the survivors had told them how they had been held for up to a month in disused factories in Libya before being packed onto the boat.
One man was beaten severely with sticks as punishment from moving away from the group to answer the call of nature, according to a survivor's statement.
The UN human rights chief Zeid Ra'ad Al Hussein said the horror at sea had been produced by a "monumental failure of compassion" on the part of European governments who are now under intense pressure to address the humanitarian crisis on their southern shores.
Two days before Europe's leaders gather for an emergency summit to tackle the Mediterranean migrant crisis, European Commission president Jean-Claude Juncker called for a show of "financial solidarity" towards the countries bearing the brunt of the drama.
Mere "compassionate rhetoric" was not enough, he said during a visit to Austria, whose Chancellor Werner Faymann would like to see massive refugee camps built in North Africa to shelter would-be migrants and refugees.
View gallery 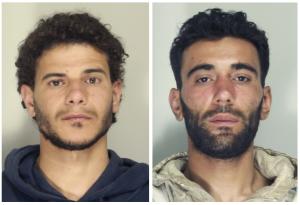 (L-R) A combination photo shows Mahmud Bikhit and Mohammed Ali Malek, two survivors of Saturday's mi …
- Wheelchair survivor -
The first of the 27 survivors who disembarked in Sicily in the early hours did so in a wheelchair. All of them were deeply traumatised, said Carlotta Sami, spokeswoman for the UN High Commissioner for Refugees.
"They are exhausted, they have nothing left," she said. "They are in a state of shock, they look completely lost."
Most of the survivors and the victims appear to have been young men but there were also several children aged between 10 and 12, she added.
"We have not yet been able to ask them about this but it seems certain that many of them will have had friends and family who were lost in the wreck."
At talks in Luxembourg on Monday, EU ministers agreed on a 10-point plan to double the resources available to maritime border patrol mission Triton and further measures will be discussed at a summit of EU leaders on Thursday.
View gallery 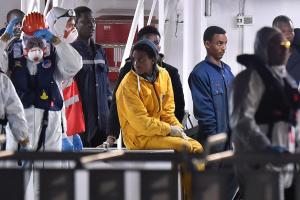 Migrants stand on the deck of the Italian Coast Guard Ship Gregretti which is believed to be carryin …
Critics say Triton is woefully inadequate and are demanding the restoration of a much bigger Italian operation suspended last year because of cost constraints.
The survivors, who hailed from Mali, Gambia, Senegal, Somalia, Eritrea and Bangladesh, were all recovering Tuesday at holding centres near Catania on Sicily's eastern coast.
Sunday's disaster was the worst in a series of migrant shipwrecks that have claimed more than 1,750 lives this year -- 30 times higher than the same period in 2014 -- and nearly 5,000 since the start of last year.
If current trends continue, there could be 30,000 deaths at sea this year, the IOM warned.
Italian officials believe there could be up to one million more would-be immigrants to Europe waiting to board boats in conflict-torn Libya.
Many of them are refugees from Syria's civil war or persecution in places like Eritrea. Others are seeking to escape poverty and hunger in Africa and south Asia and secure a better future in Europe.
- Australia's example -
Deploring the latest boat tragedy, the UN Security Council on Tuesday called for a strengthened global response to migration and human trafficking.
"The Mediterranean is fast becoming a sea of misery," said UN chief Ban Ki-moon this week.
Despite the prospect of further loss of life, a number of EU governments are reluctant to expand search-and-rescue operations, arguing that they only encourage migrants to attempt the crossing.
Australian Prime Minister Tony Abbott said Europe should follow his government's lead by deploying military forces to turn migrant boats back.
"The only way you can stop the deaths is in fact to stop the boats," Abbott said.
Australia's policy has drastically reduced the number of asylum-seekers arriving on its soil and deaths at sea but has been attacked as undermining the principle of asylum.
Ideas being looked at by the EU including trying to capture or destroy people-smuggling boats and a
- April 22, 2015
Email ThisBlogThis!Share to TwitterShare to FacebookShare to Pinterest
Newer Post Older Post Home