Pablo escobar warned then CIA that if they killed  him   ...Mexicans would  take over  and  America  would have  a drug war on its  doorstep.....its a  know fact that  Pablo  escobar  was  the man  that controlled  the  drug trafficking on the planet  ....but the  CIA   did not listen and killed  Pablo escobar ....and now  the  drug war in  Mexico is in full steam  thousands and  thousand  of people  are  being killed ....Mexico  is no  longer  a safe destination .
Pablo escobar  ,was notorious but fair ....unfortunately Mexicans  do not play in the same arena  as Pablo escobar ...this is  not  news  its a fact  ,the Internet  has  made   us  all aware  that  at the  touch of a  few  keys you can  find out  anything...the  Mexicans  unlike Pablo,have a  different way of  doing business,they are more  ruthless  and less sympathetic than  mister  escobar.......i am  in no  way  defending  Pablo escobar .....but he  had   an old school way  and  reportedly  bought schools  houses  roads  hospitals  and  was  some  what in a  criminal philanthropic  way   very  generous .....he  even built his own prison.....but  he  was  eradicated ...and ,i personally  think that  America  made  a huge  mistake .......here's  why ,Mexicans  are  from  Mayan  blood  ,they have  a different view on  life and its  value ,which simply  takes   death  to another  value .....drugs are  drugs  simply ...its  wrong ...but America  as always  does  not think  long term  it  is  short  sighted   as  a;was  and  pays  dearly for its   immediate  thoughtless  conclusions .....i have  said it now and  say  it   again .....the only way to stop the drug war   is   eradicate the  users .......never  gonna  happen.....

By Leticia Pineda3 hours ago
Ocotlan (Mexico) (AFP) - The town still bears the scars from the unprecedented offensive launched by a powerful Mexican drug cartel against government forces: bullet-pocked buildings and blood stains on the street.

The March 19 ambush that killed five federal gendarmerie officers, three gang suspects and three bystanders in Ocotlan signaled the start of a conflict between the authorities and the Jalisco New Generation Drug Cartel.
The well-armed gang took its operation to a new level on April 6 when it surprised a Jalisco state police convoy, gunning down 15 officers in the deadliest single day for Mexico's security forces in years of a bloody drug war.
The western state of Jalisco is known as the birthplace of tequila, mariachis and the country's most popular football team, the Chivas of Guadalajara.
But now it is also known as the home of the New Generation, a rising power of Mexico's underworld that had been overshadowed until now by other groups such as the Sinaloa, Zetas, Gulf and Knights Templar cartels.
Officials say the Jalisco cartel has grown so powerful that it has produced its own assault rifles in makeshift gun assembly shops. The gang has even recruited military deserters, including foreign ones.
"They were waiting for the moment when they felt strong to start this escalation," Luis Carlos Najera, the chief prosecutor of Jalisco state, told AFP.
View gallery 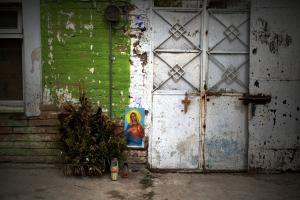 Religious symbols mark the place where a child was killed during crossfire between gunmen and the po …
Last year, authorities discovered a clandestine workshop with sophisticated equipment to build M16 and R15 rifles. Some of the homemade weapons were found following the recent attacks.
The cartel has drawn the attention of the US government, which has funded Mexico's battle against drug cartels by providing equipment, training and intelligence.
Last week, the US Treasury Department slapped financial sanctions against the New Generation and its shadowy boss, Nemesio Oseguera, alias "El Mencho," as well as its allies, the Los Cuinis cartel.
The gang has expanded beyond Jalisco into neighboring Michoacan and Colima while forging ties with other criminal organizations in the United States, Latin America, Africa, Europe and Asia, according to the US Treasury.
- 138 bullet holes -
The growing power of the cartel is evident in the destruction it has left behind in Ocotlan, near Mexico's second biggest city, Guadalajara.
View gallery 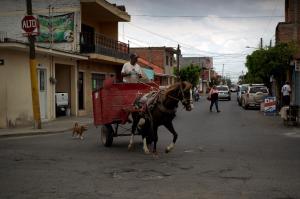 A man rides his horse cart in Ocotlan, where five federal gendarmerie officers, three gang suspects  …
"My house was hit by 138 bullets," said an Ocotlan resident who asked to remain anonymous due to safety concerns.
The woman said she and her husband laid on the floor during the March 19 shootout, which lasted nearly two hours.
That night, some 40 gunmen waited inside 12 pick-up trucks for the arrival of the convoy carrying the gendarmerie, a new elite police force launched last year by President Enrique Pena Nieto.
The gangsters fired from several sides and rooftops, according to local residents. Soldiers rushed to the scene and burst into homes to find the shooters.
People spent the night without light or telephone service because utility poles were hit in the firefight.
Two weeks later, a new ambush was launched against the state police convoy, this time on a rural, curvy road in a mountain between Guadalajara and the Pacific resort town of Puerto Vallarta.
View gallery 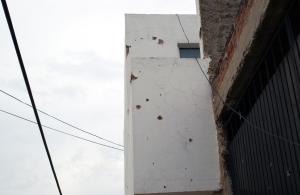 Bullet holes mark a house in Ocotlan, after the ambush against a state police convoy (AFP Photo/Hect …
The gang parked cars on the road to slow the arrival of reinforcements as they gunned down 15 officers.
The assailants used a Barrett anti-tank rifles and grenades against the convoy, said Jalisco security commissioner Francisco Alejandro Solorio.
At the site of the attack, investigators found a camp that the gunmen had used to wait for the arrival of the police. There was food and other supplies as well as makeshift beds.
"We hear they had been there for several days," Solorio said.
The security chief was himself the target of a March 30 assassination bid, which he escaped unscathed after firing his own weapon against his assailants.
- Stabbed in the heart -
The last victim of the April 6 offensive was the police chief in the town of Zacoalco.
"They stuck a knife in his heart with a message," said Maria Huerta, who runs a shop in front of the scene of the crime.
The message said the gang they would go after more officers, Huerta said.
After the chief was killed, a large, black ribbon hung at the town hall of Zacoalco as a symbol of mourning in the municipality of 27,000 people.
Before the New Generation attacks the town was relatively peaceful until state police shot and killed the gangs regional leader, Heriberto "El Gringo" Acevedo, on March 23.
"That hurt them the most," said Najera, the chief prosecutor of Jalisco.
Najera said that the gang's offensive is a response to the blows that state authorities have dealt against the group, with federal reinforcements on the way.
"We've been fighting alone for a long time."

View Comments (106)