A blockbuster concert ­featuring global pop icons, who may include Sir Paul McCartney and Queen, is also planned at Windsor Castle.

Thousands of people all over the UK will be encouraged to stage street parties in another stunning show of pageantry to the world.

The two parades on Coronation Day will conclude with members of the Royal Family — including the newly-crowned King and his Queen Consort — waving from the balcony at Buckingham Palace.

But yesterday it remained unclear whether Prince Harry and wife Meghan will be among them.

Iconic locations around the UK will be illuminated with projections, lasers and drone displays as the “centrepiece” of celebrations to mark His Majesty’s crowning in a very modern way. 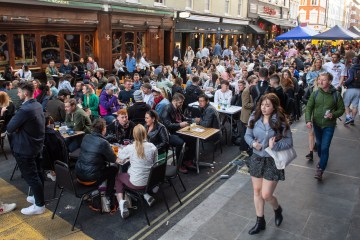 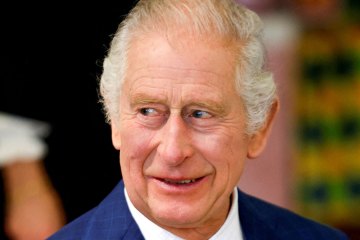 Some detail was held back such as how the King and Queen Consort will travel from Buckingham Palace to Westminster Abbey for the ceremony — and back again.

But it is expected they will be in the traditional gold carriage at some stage.

The events will take place on Saturday May 6, Sunday May 7 and Monday May 8, which has been declared a bank holiday to mark the Coronation.

‘It’s a great opportunity for all to celebrate’

In keeping with the late Queen’s love of community street parties, The Big Lunch will be held again.

The Palace said in a statement: “The King and Queen Consort hope the Coronation weekend will provide an opportunity to spend time and celebrate with friends, families and communities across the United Kingdom, the Realms and the Commonwealth.

“Their Majesties are looking forward to marking the occasion with the public throughout 2023.”

On the Saturday morning, the King and Queen Consort will arrive at Westminster Abbey in The King’s Procession having made the half-mile journey from Buckingham Palace.

Palace officials declined to say whether any formal invites have yet been sent out or answer ­questions about the likelihood of the Duke and Duchess of Sussex coming over from their US home.

Royal commentator Ingrid ­Seward said that she fully expected Harry to attend, despite the recent furore over his book and TV revelations about fights with Prince William.

She said: “I’m sure Harry will be there. How can he not come to his dad’s Coronation after writing a whole book about forgiveness? I am not so sure about Meghan.”

The Coronation service will be conducted by the Archbishop of Canterbury and will “reflect the monarch’s role today and look towards the future, while being rooted in longstanding traditions and pageantry”.

The ceremony is set to last about 90 minutes — compared to the late Queen’s three-hour Coronation.

After the service, the newly-crowned King and Queen Consort will return to the Palace in a larger ceremonial parade known as the Coronation Procession.

THE King and Queen Consort will travel to and from Westminster Abbey in two grand parades.

The first, called the King’s Procession, will be relatively low-key. Charles and Camilla may be the only royals involved in the historic half-mile journey from Buckingham Palace.

A grander parade called the Coronation ­Procession will follow the crowning service.

The King and Queen Consort, possibly in the Gold State Coach, will be joined by troops and military bands and other royals — who will gather with them, below, on the Palace balcony.

SUNDAY MAY 7: CORONATION CONCERT AND THE BIG LUNCH

STARS of the stage, screen and music will put on a spectacular concert at Windsor Castle’s East Lawn.

The final line-up could include Brian May, Elton John, the Spice Girls, Ed Sheeran and Rod Stewart.

Thousands nationwide will also enjoy street parties as part of The Big Lunch.

MONDAY MAY 8: THE BIG HELP OUT

BRITS are asked to give their time and create a “volunteering legacy” to mark the King’s long devotion to public service.

This is expected to include ­thousands of troops, military bands and other members of the Royal Family.

Constitutional expert Dr Bob Morris, of University College London, said: “It will be very grand and will probably eclipse the Queen’s funeral and Platinum Jubilee in terms of pageantry.

“There will be more bands and more people.

"It will certainly be an amazing sight. But it won’t be the grand affair we had in 1953, which had all the colonial troops. It will feel less imperial.”

Once they have returned to the Palace, the King, Queen Consort and the Royal Family will appear on the balcony to wrap up the ceremonial events.

The Palace said: “The Coronation is a solemn religious service, as well as an occasion for celebration and pageantry.”

On the Sunday, a Coronation Concert will take place at Windsor Castle on the East Lawn.

Those predicted to appear include a supergroup of musical knights such as surviving Beatles Paul McCartney and Ringo Starr, Elton John, Rod Stewart, Cliff Richard and other top performers including Ed Sheeran, Eric Clapton and Sting.

It is believed more ­contemporary big name pop stars could also be invited including Harry Styles and Dua Lipa.

There was even speculation the Coronation could be the impetus to finally bring all of the Spice Girls back together again.

The audience will include volunteers from the King and Queen Consort’s charities, plus several thousand members of the public.

Free pairs of tickets can be won in a public ballot run by the BBC. Details will be revealed later.

The singing performances will be complimented by spoken word sequences likely to feature top actors.

The show is also set to involve a newly-formed Coronation Choir — with members drawn from ­community choirs and amateur singers across the UK.

A Virtual Choir, made up of singers from across the Commonwealth, will also perform.

A highlight of the celebrations will be an event called Lighting up the Nation, which will see iconic locations ­illuminated using projections, lasers and even drone displays.

Meanwhile, neighbours and communities across the UK are encouraged to take part in a Coronation Big Lunch.

During the Queen’s Platinum Jubilee, 16,000 street parties were held across the nation.

On Bank Holiday Monday, The Big Help Out will see people volunteering across the country.

The palace said it will “bring communities together and create a lasting volunteering legacy from the ­Coronation weekend”.

Culture secretary Michelle ­Donelan said: “The weekend of events will bring people together to celebrate our monarchy and the mixture of tradition and modernity, culture and community that makes our country great."

Nation together as one

But he can see that the festivities have to reflect not only his desires but those of his diverse subjects.

Suddenly we’re all celebrating together in a party atmosphere — something the nation will remember in years to come.

Will Harry and Meghan be invited? Of course.

Harry will attend, as how can you write a book about forgiveness and not turn up to your dad’s coronation? Meghan, I am not so sure.