Drinking water for homes and schools in Arizona is DRYING UP because foreign owned megafarms are sucking it up for their crops . . . which are then shipped to Middle East

By ALASTAIR TALBOT FOR DAILYMAIL.COM

Drinking water for residents of Wenden, Ariz., has started to dry up as megafarms owned and backed by sovereign nations use it to grow their crops instead.

Groundwater is a necessity to grow agriculture in the Southwest, and while the Colorado River Basin is going through a prolonged drought, overused aquifers in Arizona are rapidly being exhausted, affecting the local lifestyle and economy.

In fact, workers with the state's water district watched, with the aid of a camera lowered into the town's well, the water moving, CNN reported.

That's because, according to Gary Saiter, a resident and head of the Wenden Water Improvement District, the water was being literally and rapidly pumped out of the ground by a neighboring well belonging to a United Arab Emirates-based company.

It's important because residents of towns Wenden and Salome get their water from the same source as farms - underground pools - but declining water tables in the area show levels have dropped from about 100 feet in the 1950s to about 540 feet in 2022.

While Arizona's La Paz County is experiencing its worst drought in 1,200 years, as are other areas in the state and Southwestern region of the Unite States, foreign-owned farms growing crops requiring extensive amounts of water, such as alfalfa, are being blamed for the dry spell. 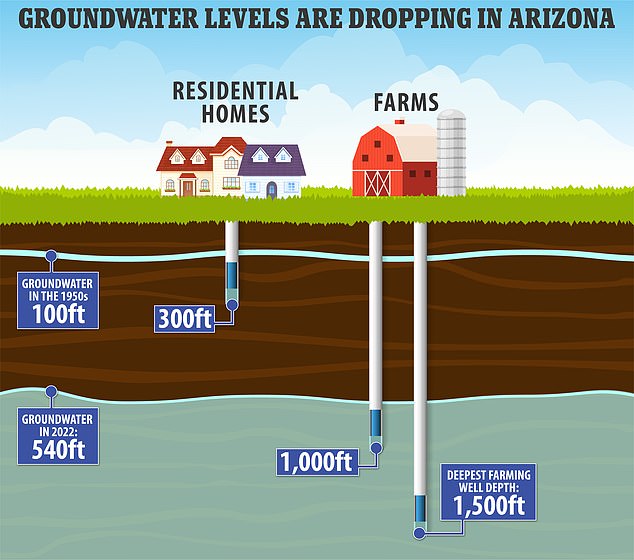 Aquifers allowing groundwater to stream through Wenden and Salome, Ariz., have seen its levels decrease significantly since their construction in the 1950s.

To make matters worse, the crops grown by these megafarms are eventually shipped to feed cattle and other livestock in other places around the world, particularly in the United Arab Emirates, rather than the state's own.

In Salome, local water utility owner Bill Farr claimed his wells, which supply water to local schools and 200 other purchasers, are 'nearing the end of its useful life,' CNN reported. 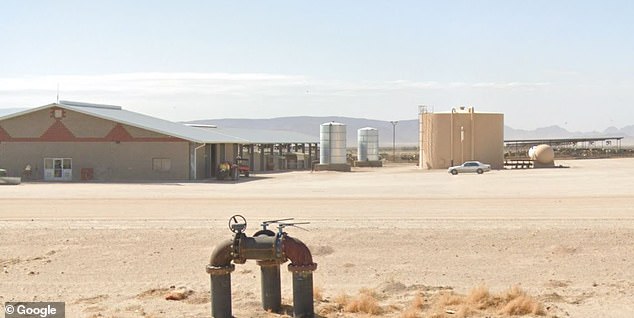 Al Dahra Agricultural company, based in Abu Dhabi, and Fondomonte Arizona LLC - a commercial farming venture wholly owned by Almarai, one of the biggest dairy companies in the Gulf region - 'have depleted their [water], that's why they are here,' La Paz County supervisor Holly Irwin said.

She added: 'That's what angers people the most. We should be taking care of our own, and we just allow them to come in, purchase property and continue to punch holes in the ground.'

In 2018, a law prohibiting farms to grow thirsty crops like alfalfa and hay passed in Saudi Arabia in 2018, resulting in the necessity of 'feedstock from abroad,' Eckart Woertz, director of the Germany-based GIGA Institute for Middle East Studies, told CNN.

The UAE now imports 80 percent of its food production, according to My Bayut, the country's 'most popular real estate and lifestyle blog.' 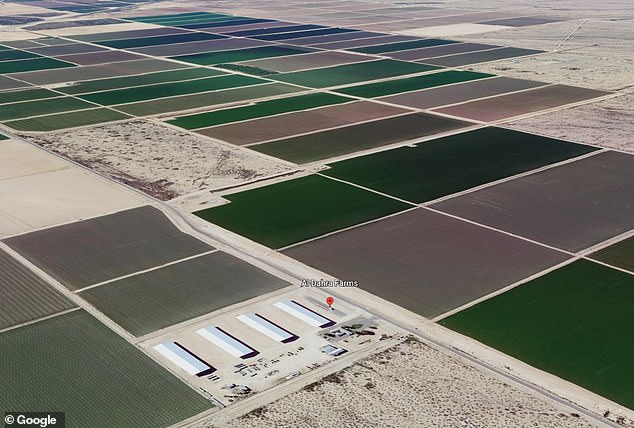 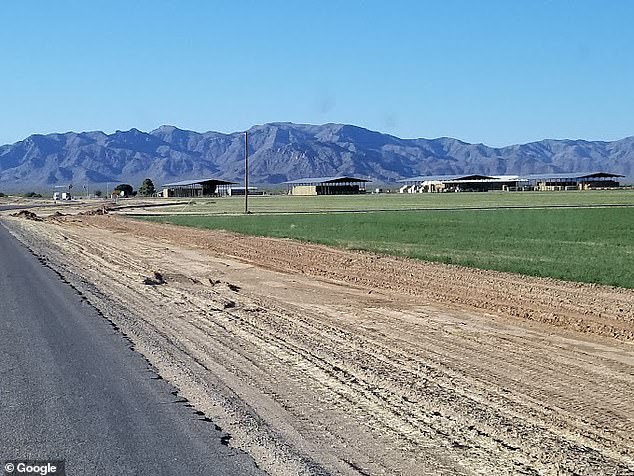 The Almarai Company, which operates under its subsidiary, Fondomonte, in the US, owns approximately 10,000 acres of farmland in Vicksburg, and is one of the biggest dairy suppliers in the Gulf.

The Saudi-backed company also owns nearly 3,500 acres in Southern California, another popular mass agricultural spot in America, and uses water from the Colorado River to nurture its crops.

In the Midwest, farmland owned by sovereign nations has seen a fourfold increase.

'It gives you that sense you're closer to the source,' Woertz told CNN. 'The sense that you own land or lease land somewhere else and have direct bilateral access [to water] gives you a sense of maybe false security.' 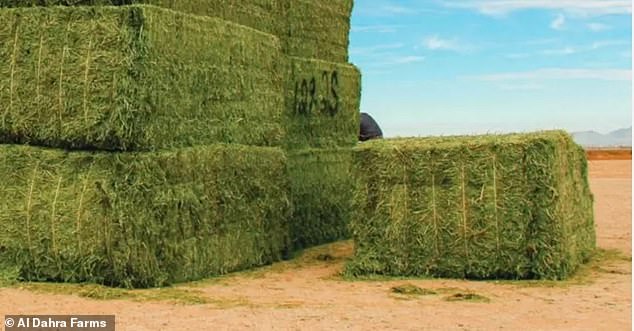 Crops grown on these foreign-owned megafarms, mostly alfalfa and hay (pictured), are ultimately exported to Saudi Arabia and other surrounding Gulf nations

In 2014, Fondomonte bought 10,000 acres of farmland for $47.5 million, and it also has leasing ties with the state to grow its ploughland.

Crops grown on these megafarms, mostly alfalfa and hay, are later put on trucks so they can be exported to Saudi Arabia.

Almarai has previously said its business in Arizona is related to 'continuous efforts to improve and secure its supply of the highest quality alfalfa hay from outside the Kingdom to support its dairy business.'

'It is also in line with the Saudi government direction toward conserving local resources,' according to Arab News, the biggest English language daily in Saudi Arabia. 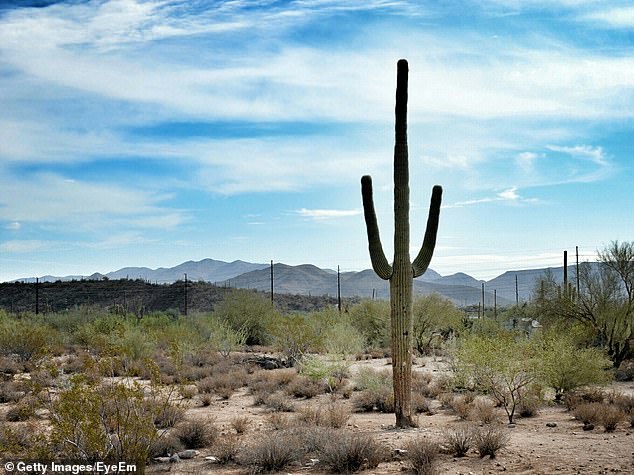 'Fondomonte decided to invest in the southwest United States just as hundreds of other agricultural businesses have because of the high-quality soils, and climatic conditions that allow growth of some of the finest quality alfalfa in the world,' Almarai said through one of its spokespersons.

Local residents and officials now find themselves fighting against not only multi-million corporations but countries, which themselves are experiencing similar droughts to the one happening in the Southwestern region in a race for the most important commodity on Earth - water.

'We are literally exporting our economy overseas,' Cynthia Campbell, who is a water resources management adviser for the city of Phoenix, told CNN. 'I'm sorry, but there's no Saudi Arabian milk coming back to Southern California or Arizona. The value of that agricultural output is not coming through in value to the US.'

Arizona gets about 36 percent of its total water supply from the Colorado River as recently as 2020, according to The Associated Press.

That share of river water feeding farms and cities has declined some since then, with the advent of a federally approved Drought Contingency Plan that will cut the state's river water use by 21 percent starting in 2023.

It's expected to drop even further in the coming years but nobody knows how much right now.