Terminally out-of-touch Democrats are limping into Tuesday like a wounded dog wagged by its woke tail — because they were deaf, dumb and blind to their constituents' concerns, writes JOSH HAMMER

By JOSH HAMMER FOR DAILYMAIL.COM

Josh Hammer is host of 'The Josh Hammer Show,' and a research fellow at the Edmund Burke Foundation

The fundamental problem for the Democrats is that they have quite simply gotten very bad at politics.

If that sounds like a sweeping statement, that's because it is.

But how else to explain the fact that as voters consistently tell pollsters they care most about crime, inflation, the economy, and immigration, the Democrats obstinately refuse to abandon their dog-eared playbook of pro-abortion maximalism, 'Orange Man Bad'-style January 6 fearmongering, and trite warnings about the purported threats to 'our democracy' if the opposition party wins a free and fair election.

The Democratic Party is, at this point, best described as a wounded dog wagged by an intersectional, woke-besotted tail.

It seems that the voters have finally had enough. In fact, Americans just can't take it anymore.

The red wave did not materialize out of nowhere – it's been building for months. And if the terminally out-of-touch Democrats hadn't been no deaf, dumb and blind to the pleas of their own constituents, maybe they could have headed off the disaster.

Case in point: last November, Republican Glenn Youngkin stunned the nation by capturing the Virginia governorship, proving that the Old Dominion—which had gone for President Joe Biden in the 2020 presidential election by over 10 points, and hadn't gone statewide for the GOP in any election since 2009—is still very much up for grabs.

The dominating issue in that race – the right of parents to control what their children learn in public schools.

Youngkin pledged to rid the state's education system of critical race theory, the perverse idea that skin color – nearly above all else – determines an individual's fate in America.

For his part, Democratic candidate Terry McAuliffe declared: 'I don't think parents should be telling schools what they should teach.' 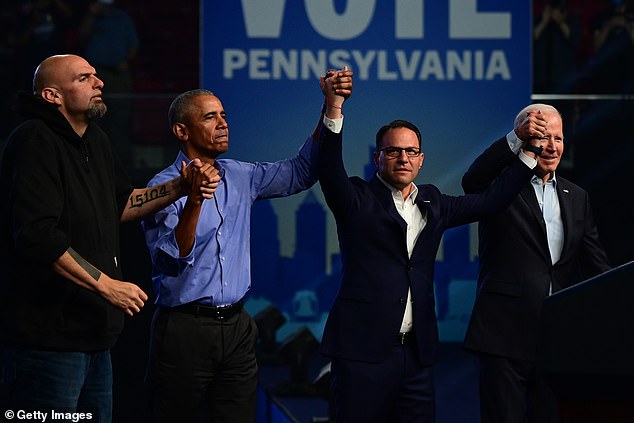 And that was all she wrote.

White women, who broke for Joe Biden in the 2020 presidential election, voted overwhelmingly for Youngkin.

The media and political establishment were shocked. But the cable news carnival barkers said they knew why it happened.

Virginians are 'racist' they declared, despite the fact that Youngkin's lieutenant governor, Winsome Sears, is a black woman and his attorney general, Jason Miyares, is a Latino man.

'I can assure you,' declared MSNBC's (now-former) host Tiffany Cross. 'This is about the fact that a good chunk of voters out there are OK with White supremacy. Let's call a thing a thing. Actually, scratch that. They are more than OK.'

Ever since, politicos have been debating whether the results that evening were aberrant, or whether they would prove prescient for the breadth and depth of Republican pickups—that is, the scale of the red wave—during the 2022 midterm elections.

As we finally enter the campaign's final days, the answer is increasingly clear: very prescient. The red wave is very real, and Democrats should prepare accordingly for heavy losses Tuesday evening.

True, a quick glance at some of the polling numbers might give a somewhat different impression.

In the increasingly Trump-y and quintessential Rust Belt state of Ohio, Republican Senate candidate J.D. Vance has struggled to put away Democratic candidate Rep. Tim Ryan. Incumbent Sen. Ron Johnson (R-WI), who has served two previous terms, is nursing a similarly small polling lead in the Badger State. Meanwhile, the Senate races in the 'big four' states this cycle of Pennsylvania, Georgia, Arizona, and Nevada all appear to be nail-biters.

But the situation is more complicated than that. To start, some of the other polling numbers right now are indeed remarkable.

In the reliably Democrat state of New York, gubernatorial challenger Rep. Lee Zeldin (R-NY) is within clear striking distance of incumbent Gov. Kathy Hochul (D-NY); indeed, Trafalgar Group, one of the nation's most accurate pollsters the past three election cycles, had Zeldin narrowly ahead in one recent poll.

In Oregon, a once-purple state that has become a liberal bastion over the past 15-20 years, Republican gubernatorial nominee Christine Drazan is poised for a huge upset victory.

In the Granite State, Republican challenger Don Bolduc—once dismissed as a 'far-right' gadfly—now runs even with vulnerable incumbent Sen. Maggie Hassan (D-NH), and has all the momentum on his side.

Some of the polling cross-tabs are also incredibly bullish for the GOP; as The Wall Street Journal reported last week, the all-important white suburban woman voting bloc has swung toward Republicans by an astonishing 27 points just since August, reminiscent of the pro-Youngkin surge in Virginia.

As the Journal explained, this 'suggests that the topic of abortion rights has faded in importance after Democrats saw energy on that issue this summer in the wake of the Supreme Court's decision to overturn Roe v. Wade.'

Put another way, the 'post-Dobbs backlash,' which we saw most clearly in Kansas in early August, when pro-choice voters mobilized to defeat a pro-life amendment to the state constitution, is no more. 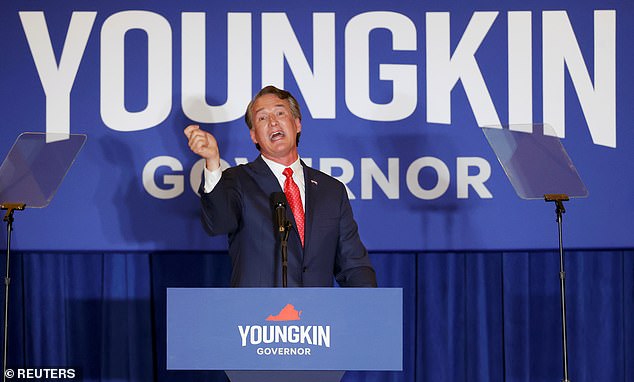 White women, who broke for Joe Biden in the 2020 presidential election, voted overwhelmingly for Youngkin (above) in November 2021. 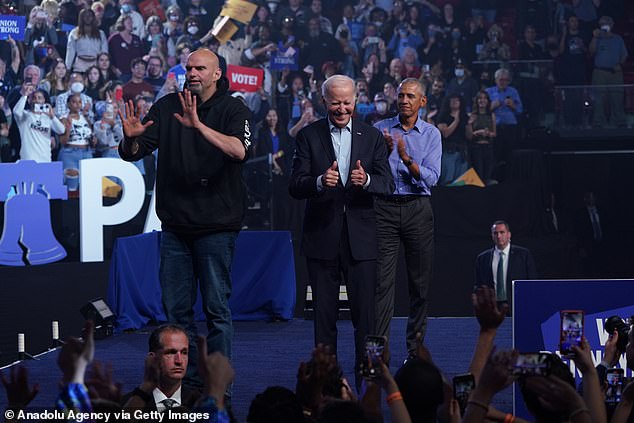 The fundamental problem for the Democrats is that they have quite simply gotten very bad at politics.

There is also increasing evidence other voting groups once thought to be loyal Democratic voters are shifting.

This may finally be the electoral cycle where Hispanic voters, even if they do not become a majority-Republican national voting bloc, will move decisively toward the GOP.

Hispanics are also sick of being called 'Latinx' by clueless liberals, who decided that they need a name change.

Flores' victory corroborates the tremendous Republican gains in Texas's heavily Hispanic Rio Grande Valley region, which President Donald Trump closely contested in 2020 in such overwhelmingly Hispanic counties as Starr County (which he narrowly lost) and Zapata County (which he won).

In my own state of Florida, where all signs point to election night romps for Republican incumbents Gov. Ron DeSantis and Sen. Marco Rubio, the only two questions are whether the two men will outright win the statewide Hispanic vote and whether they will win the state's most populous county, 70% Hispanic Miami-Dade County.

A Republican gubernatorial candidate in Florida has not won Miami-Dade County since Jeb Bush—who speaks fluent Spanish and whose wife is Mexican—in 2002.

Finally, follow the campaign money, instead of just the horse-race numbers.

At the U.S. House level, the DCCC is sacrificing what should be toss-up races in no less an iconic blue state than California to secure reelection for embattled incumbents competing in congressional districts Biden won by double digits in 2020. 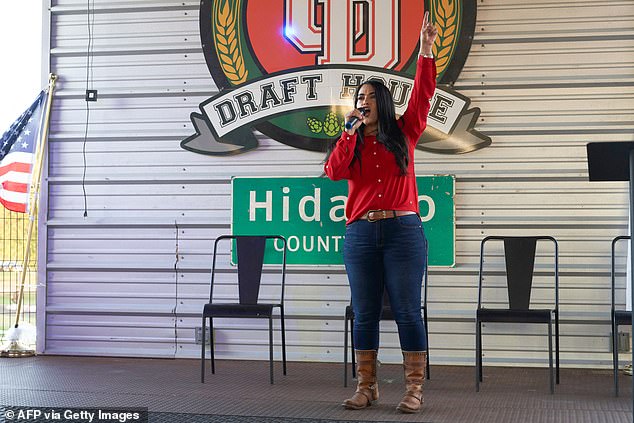 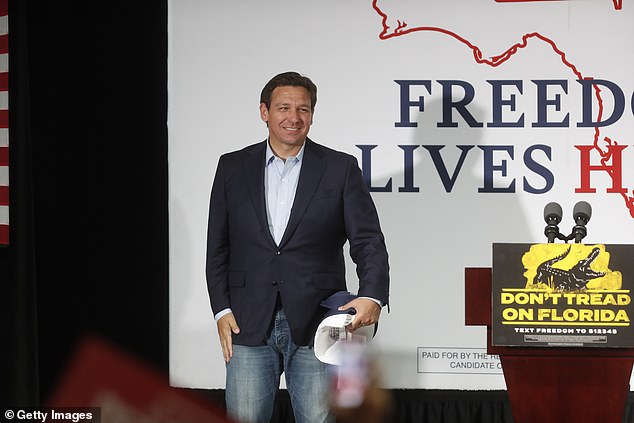 All signs point to election night romps for Republican incumbents Gov. Ron DeSantis and Sen. Marco Rubio, the only two questions are whether the two men will outright win the statewide Hispanic vote and whether they will win the state's most populous county, 70% Hispanic Miami-Dade County. (Above) DeSantis on November 6, 2022 in Sun City Center, Florida

And at the U.S. Senate level, the Democratic Senate Campaign Committee has deployed money to no less a liberal enclave than Washington State, where incumbent Sen. Patty Murray is facing an inspired challenger in the form of Republican Tiffany Smiley.

The red wave, of course, will not lift every single candidate in a close race.

Georgia Gov. Brian Kemp (R-GA) is set to trounce inveterate election-denier challenger Stacey Abrams, but that does not necessarily mean Kemp's coattails will drag controversial Republican Senate candidate Herschel Walker across the finish line in his bid to dethrone incumbent Sen. Raphael Warnock (D-GA). (I do predict a Walker victory.)

In Arizona, Republican Kari Lake appears poised for a gubernatorial victory (and future national political superstardom), but it is yet unclear whether she can help Republican Senate candidate Blake Masters beat incumbent Sen. Mark Kelly (D-AZ). (I do predict a Masters victory.)

In the final count, I predict Republicans nab a 54-46 Senate majority.

All close races will break their way; such is the nature of a wave year.

Republicans will also increase their partisan share of the nation's governor mansions, and will likely net out with 31 governors (with upward of 34 seats possible).

Democrats will be forced to ponder what went wrong. Perhaps next time around, they might consider focusing just a little bit on what voters actually want to hear.