Amid rising seas, Atlantic City has no plans for retreat 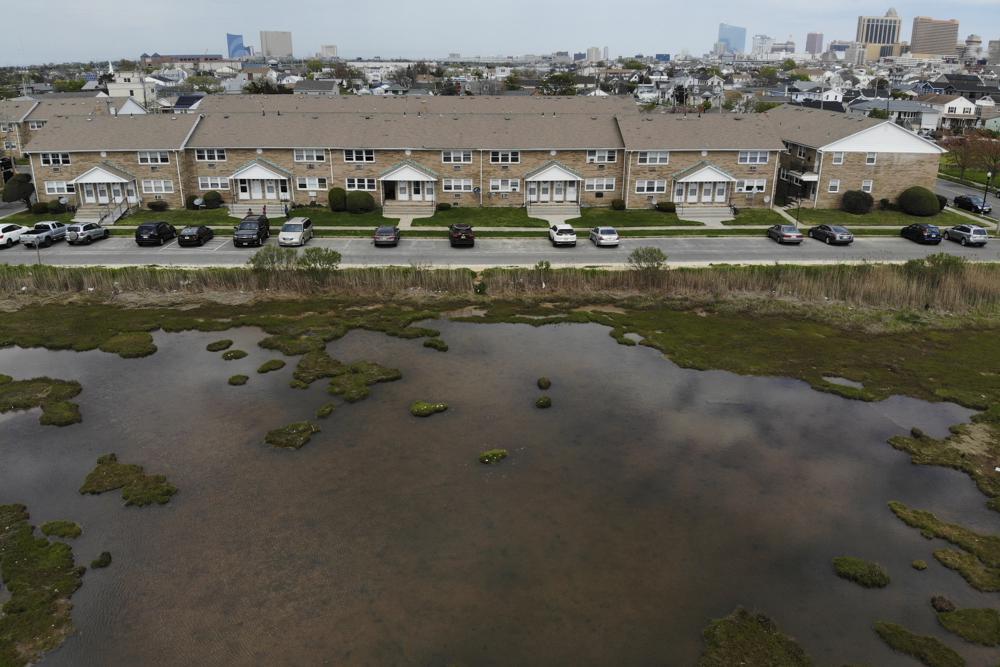 1 of 8
Water pools at the edge of residenti......al district in Atlantic City, N.J., Wednesday, Sept. 4, 2022. Some cities around the world are pulling back from shorelines, as rising seas from climate change increase flooding. But so far, retreat appears out of the question for Atlantic City. (AP Photo/Seth Wenig)

ATLANTIC CITY, N.J. (AP) — Some cities around the world are pulling back from shorelines, as rising seas from climate change increase flooding. But so far, retreat appears out of the question for Atlantic City, New Jersey.

The breezy getaway town is on the water on a barrier, which was once reachable only by boat but in modern times via a causeway. The city fully occupies a small piece of land, water on either side, just above sea level.

“We love our residents,” said Barbara Woolley-Dillon, former Atlantic City Planning and Development Director. “We have one of the most diverse populations… it’s a great place to be, and we have such a thriving community that we want to do everything we can to keep it intact.”

The city, popular with vacation goers in the Eastern U.S., particularly in the summer, brings in billions of dollars in revenue, another incentive to keep it intact as long as possible.

“Atlantic City is a seven billion dollar a year economic engine” that benefits all of southern New Jersey and must be maintained, said Jim Rutala, an Atlantic City planning contractor.

Still, the flooding is getting deeper and more frequent. In 1910, researchers installed a tide gauge at the end of Steel Pier Amusement Park. The gauge shows the sea has risen a foot and a half since then, more than double the global mean sea level rise.

City leaders have no plans to take state offers to buy and demolish homes in flood-prone areas, according to Rutala.

Instead, officials are spending $100 million, from 2016 through next year, to “fortify and armor” the city from rising sea levels by installing sea walls, pump stations and bulkheads, according to Rutala. Unseen by most tourists, a newly built pump station in Fisherman’s Park pushes ocean water that has come ashore back into the bay. It is common to hear construction crews at work building structures with entrances elevated to strict new height requirements.

Other cities in New Jersey have taken a different route to confront flooding. In Woodbridge, about 100 miles north of Atlantic City, in recent years the state has bought and torn down more than 150 homes to remove people and property from the danger of future floods.

In Atlantic City, tourists and residents walk along street names that inspired the Monopoly board game, such as Baltic Avenue and Park Place. Casinos pull in people hoping to win big at the poker table or slot machines. And outside are wide-open beaches and boardwalk amusement park rides.

Twenty-seven million people visit the resort town annually. For some, it’s a place to escape from their daily lives. For others, it’s a way to live a simple life by the ocean.

For many residents, it’s unbearable to contemplate a future without the city.

“This part of Atlantic City is just very tightly knit and we are a nice little neighborhood,” said elementary school teacher Abby Moul, 47, as she played with her dog in the north part of the island. “It is kind off the beaten path and that’s what I love about it.”

Under current projections for global emissions, Rutgers University estimates that New Jersey is likely to experience another one to three feet of sea level rise between now and 2070, according to Robert Kopp, Rutgers climate scientist. And the land here is sinking from what scientists call the “see-saw” effect of melting glaciers much further north.

It’s unclear if the city’s new fortification projects will be enough to confront the projected sea level rise. The U.S. Army Corps of Engineers estimates that New Jersey’s 950 square miles of beaches and back bays will sustain more than a billion dollars in annual flooding damage in a few years.

Atlantic City is the one of the poorest and most densely populated part of the New Jersey coastline. More than two dozen different languages are spoken in city schools.

Many people here have what locals call “back-of-the-house” jobs at one of the nine casinos, preparing food, cleaning rooms and other work.

It can cost $150,000 in the denser, older parts of the city to raise up an $80,000 home to protect it from “nuisance” flooding, periodic flooding, sometimes from high tides or backed up drainage systems. That cost is simply out of reach for many.

On a recent afternoon, lifelong Atlantic City resident Zakiy Abdullah, 45, a forklift operator, did his best to keep his three-year-old daughter Jamaarah Wells from riding her tricycle through flood waters in the street.

“Flooding it is a constant problem,” said Abdullah. “As you can see, the water has not evaporated from the other night.”

Kimberly McKenna, of the Stockton University Coastal Research Center, says most of the increased flooding in Atlantic City happens in the part of the island that faces the mainland, called the back bay. That also happens to be where many people live in poverty.

“Those floods, what we may now call nuisance flooding, will turn into regular flooding,” said McKenna. “And that’s going to be persistent flooding. People won’t be moving their cars. They will be moving their homes.”

Local coastal governments like Atlantic City will have to decide whether to manage a retreat from the coastline over several years, or to stay and only leave when and if the flood waters become unlivable.

“You don’t need to give up a community right now because of the risk of three or five feet of sea level rise,” said Kopp, the Rutgers climate scientist. “But you need to think about how redevelopment plans you are making today will fare in the future. There is no simple solution.”