August 1, 2020, 1:45 PM
Lea Thompson agrees with Brad Garrett that Ellen DeGeneres is fostering a toxic work environment on the set of “The Ellen DeGeneres Show.”
“Sorry but it comes from the top @TheEllenShow,” Garrett, who starred on “Everybody Loves Raymond,” tweeted Thursday, calling out the DeGeneres after several former employees came out to describe mistreatment behind-the-scenes and DeGeneres offered an emotional apology. “Know more than one who were treated horribly by her. Common knowledge.”
“True story. It is,” Thompson, whose credits include “Back to the Future” and “Some Kind of Wonderful,” responded Friday.
Also Read: 3 'Ellen DeGeneres Show' Executive Producers Accused of Sexual Misconduct by Former Employees
On Friday, Scooter Braun, record executive and manager of clients like Justin Bieber and Ariana Grande, took to Instagram to defend DeGeneres, saying people “love to take shots.”
“People love to take shots. They love to see people fall. How quickly so many forget. How easy it is to stay quiet when it doesn’t effect [sic] them,” Braun wrote in an Instagram post. “[DeGeneres] is a kind, thoughtful, courageous human being who stands for what is right and highlights on her show the best of us. She has helped change the views for equality all around the country and the world. She doesn’t do what is popular she does what is right.”
Related: Former Ellen DeGeneres show employees allege sexual misconduct 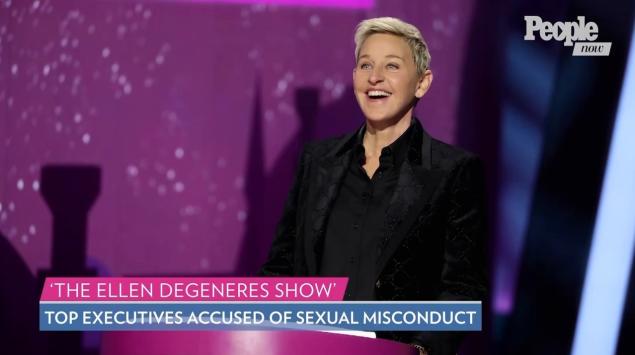 PLUS: Brad Garrett Claims Mistreatment by Ellen DeGeneres Is 'Common Knowledge' After Host's Apology
He added, “Today I’m sending love out to her. I know first hand how much she helps others both when we are all watching and when we are not. @theellenshow thank you for all you do and keep your head held high.”
According to BuzzFeed News in an article from July 17, 10 former employees and one current “Ellen” staffer — who all asked to remain anonymous — detailed instances of the negative culture at the show, including “microaggressions” toward an employee of color and occasions where individuals were fired for taking time off to attend funerals or due to medical problems.
Also Read: Ellen DeGeneres Apologizes to Staff Over Workplace Culture, 'Staffing Changes' Promised
In a letter to employees obtained by TheWrap, DeGeneres vowed to “correct the issues.”
WarnerMedia also issued a statement on Thursday promising “several staffing changes, along with appropriate measures to address the issues that have been raised.” Reps for Warner Bros. declined to provide specific details on the nature and extent of the personnel changes.
Earlier this week, executives from Telepictures, which produces the show, and distributor Warner Bros. TV announced that WarnerMedia’s employee relations group and a third-party firm would conduct the investigation into the accusations.
Three executive producers at “The Ellen DeGeneres Show” have since been accused of sexual misconduct by former employees in a story published by BuzzFeed News late Thursday.
In the article, multiple individuals who previously worked on the daytime talk show — who asked to remain anonymous for fear of retribution — detailed incidents of harassment and sexual misconduct they say they experienced with head writer and executive producer Kevin Leman, executive producer Ed Glavin, and co-executive producer Jonathan Norman.
Representatives for DeGeneres and the show have not yet responded to TheWrap’s request for comment.
Read original story Lea Thompson Backs Brad Garrett, Says ‘True Story’ That Ellen DeGeneres Has Treated Guests ‘Horribly’ At TheWrap