this is a no brainer


Really you think so .....i mean its fucking wal -mart .......have you seen the fuckers  that inhabit the place ......its apocalyptic.....go in to any wal-mart after midnight .....or any time really and you will see  the best freak show ever ....there is  even a website dedicated to the fucking freaks that wander  around the place .........well when you sell shite ...what do you get shite people buying shite .....every trailer  park and meth head wanders ......and  waddles around there  ....i am not sure if there is a shop  especially that sells clothes for
wal- mart shoppers .......they are the  fucking worst dressed cunts on the globe ........its all cheap shit .....thats is what .....i do admit i have  bought a printer and  some stuff  ...but full on shopping...... fuck !!no ......i have  actually witnessed full grown men enjoying themselves shopping in there ......that's the lowest a man can go ......but then i saw his wife  ...he probably got some fresh air ......being stuck with a blimp cannot be fun .....so i guess shopping at wal- mart is like going to vegas .......
The worst display i have ever seen in human filth is black friday or thanksgiving eve .......i mean what the fuck .....its the lowest form of human garbage ....poeple on vacation fighting for shit .......where are morals ......none if you go to wal-mart apparently .....it vacuums the soul right out of what would be left of  a human parasite ......
Wal-mart is renowned for  selling cheap shit ....its all chinese  ....i am sure i have never saw anything american in there  ...except for the workers ......who get gypped on their wages apparently they cannot claim health benefits and  stuff  because they get fucked out of  hours  .........apparently they have labor violations up the arse .....no surprise ....... 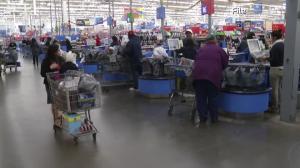 Scroll back up to restore default view.
A man filmed his tense encounter with fellow shoppers at a Walmart on July 19, which he said was sparked after he asked one of them why she entered the store in Martinez, California, without a mask.The retail giant on July 15 announced a policy requiring customers to don masks while in-store. However, Walmart said the policy would not be enforced until July 20 to give it time to “inform customers and members of the changes, post signage and train associates on the new protocols.”In the video shot by Brian Campbell-Miller, he is in a queue behind a woman and her two children, none of whom are wearing a mask. The woman tells Campbell-Miller “we would all be wearing the same mask if it mattered.”The interaction gained the attention of two other women, neither of whom were wearing masks, who were sympathetic to the first woman’s position.“Stay home if you’re so scared,” one remarks, moments before accusing Campbell-Miller of destroying “this country.” Another calls him “Antifa” and aims the word “brainwash” at him.The first woman can be heard later telling another customer with children that the Centers for Disease Control and Prevention (CDC) has said that “children should not be wearing masks.” According to the CDC, this guidance is true for children under two.She also tells the man, “you’re making yourself sick by wearing the mask.”As of July 21, the United States had the highest number of COVID-19-related deaths globally, with the John Hopkins University coronavirus tracker recording a total 140,909 fatalities. Credit: Brian Campbell-Miller via Storyful


- July 22, 2020
Email ThisBlogThis!Share to TwitterShare to FacebookShare to Pinterest