there is no end to stupid bastards using up precious resources like air water and food .... 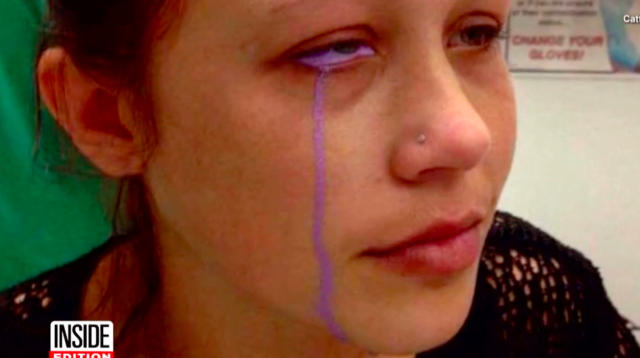 A model from Ottawa, Canada, could have permanent vision loss in one eye after her now-ex-boyfriend attempted to tattoo her eyeball with purple ink.
“The artist, my ex-boyfriend, just kept pushing me until I got it done that night,” Catt Gallinger, 24, told Vice. “We were only together for a month, but I’ve known him for years. It was something I thought I could trust him with because he had a portfolio. I was wrong.”
Gallinger said her ex, Eric Brown, bungled the procedure by using a needle that was too big, sticking it in too deeply and using “pure ink” instead of ink diluted with saline. She said she went to the hospital immediately because she experienced pain and swelling, but that doctors sent her home because they weren’t sure something was wrong.
She went to a second doctor when she was still experiencing symptoms weeks later. The medical professional was apparently horrified.
Gallinger said she is still experiencing pain and blurry vision, and that she is scheduled for surgery next week. (Photos of her eye before and after the procedure are below.)
Brown has spoken out in defense of his work. In an interview with the CBC, he blamed Gallagher for not taking care of her eye after the procedure, and for not using eye drops as he had recommended.
But experts say the procedure is dangerous in general. Opthalmologist Setareh Ziai told the CBC that what happened to Gallinger is an extreme version of possible risks.
After photos of Gallinger’s eye went viral, Popular Science published a primer on how scleral tattoos — meaning a tattoo on the white part of the eye — are supposed to work. The publication noted that even the artist who first performed a scleral tattoo has said it’s not safe because even a minor mistake can lead to major, permanent damage.
A safer option is a surgical corneal tattoo performed by a qualified ophthalmic surgeon, according to PopSci. Corneal tattoos are typically performed as a type of reconstructive cosmetic surgery, or to improve eyesight.
Gallinger told The Canadian Press that the aftermath of the tattoo is also taking a toll on her mental health.
“At this point, every day is different,” she said. “Some days I feel a bit better, other days I kind of want to give up.”
Related:

Immortalize your loved one's voice with this soundwave tattoo

Give your tattoo a listen.
Watch
- October 02, 2017
Email ThisBlogThis!Share to TwitterShare to FacebookShare to Pinterest