mark does not give a fuck like all billionaires ...but facebook zombies will buy his bollocks anyways

"For the ways my work was used to divide people rather than bring us together, I ask forgiveness and I will work to do better" Mark Zuckerberg posted to Facebook tonight on Yom Kippur, the Jewish day of atonement. Yet first Facebook must redeem itself by recognizing how its dewy-eyed trust in the world can be abused.
Zuckerberg has recently faced stern criticism from liberals over Facebook's failure to block fake news and Russian interference in the 2016 U.S. election, while simultaneously having Facebook called "anti-Trump" by the President himself.
Today's statement was met with mixed reactions, with some pointing out that Zuckerberg hadlisted himself as an atheist until late 2016 when he reaffirmed the Jewish faith in which he'd been raised.
"Oh former atheist Mark Zuckerberg, suddenly so religious now that he's aiming for the world's presidency. To make it very clear: no problem in being an atheist whatsoever; the problem is to use religion as a political tool" Brazilian ad platform Boo Box co-founder Marco Gomes tweeted. Journalists from the New York Times and Wall Street Journal cautiously shared Zuckerberg's post without comment.
Facebook has shown significant progress in thwarting interference in elections in Germany and France, deleting malicious accounts and working closely with election commissions. But as more information about the extent of Russian meddling in the U.S. presidential race emerges, Zuckerberg has come under additional fire.
The company has repeatedly been warned of abuse and its inadequate responses, yet dismissed issues as edge-cases or bugs in its system. Back in 2015, Russian trolls attacked Ukrainian protesters with false reports of inappropriate content, causing their acconts to be taken down. Now news continues to unfold about Russians posting fake news and buying ads to stoke anti-immigrant sentiments in the US, discourage democrat voters, and further divide the country.

Matters worsened when Zuckerberg responded to Trump tweet that "Facebook was always anti-Trump" by saying "Trump says Facebook is against him. Liberals say we helped Trump. Both sides are upset about ideas and content they don't like. That's what running a platform for all ideas looks like."
That response derided critics as close-minded and washed over Facebook's troubles as being inevitable while highlighting Facebook's positive impacts on the election. It also cowed to Trump's go-to tactic of bullying his opponents in hopes of receiving softer treatment. Zuckerberg was baited into positioning Facebook as neutral despite Russian election interference coming to the aide of Trump's campaign.
By saying criticism comes from all-sides with Facebook in the middle instead of directly rebuking the President's statement, Zuckerberg puts Facebook in a tenuous situation. If its internal investigation into election interference reports the Russians aided Trump, the President can merely dismiss it as the "anti-Trump" sentiment he warned about.
Related:
For more news videos visit Yahoo View, available on iOS and Android.
Having interviewed Zuckerberg numerous times over the last 7 years of reporting on Facebook, my belief is that he was earnest and genuine in his apology today. He seems legitimately concerned with the potential negative impact his platform has had in the past year.
But the statement is incongruent with his past explanations. Politicizing the Jewish high holiday is sure to rub some the wrong way, and come off as a request for more lenient treatment by the public and press.
A more consistent approach of 'I admit we were caught off guard, made mistakes regarding fake news and election interference, did not operate as a safe platform for all ideas, and here's what we're doing to fix it' might be better received. Positioning legitimate concerns about election interference with equal measure to Trump's blustering, while pointing to Facebook's good intentions in the middle erroneously minimizes the complaints while giving strength to Trump's propaganda.

It was likely the idealistic perspective of Facebook's leadership that led to the naivety about the potential for misuse of the social network, rather than willful ignorance or greed. But the path forward isn't through faux-neutrality or forgiveness, but clear admission of malfeasance and demonstrable change.
The tech industry is no longer just the tech industry, and apps aren't just apps. These products with greater reach and impact than possibly any communication systems in history must be shepherded with more skepticism and cynicism. Worst-case scenarios come true, and must be prepared for rather than assumed to be unlikely. Giving everyone a voice is a double-edged sword. Though it can be a force for good, it also requires more judicious protections against the backside of the blade.

‘I Will Work to Do Better.’ Mark Zuckerberg Apologizes for Facebook’s Divisiveness 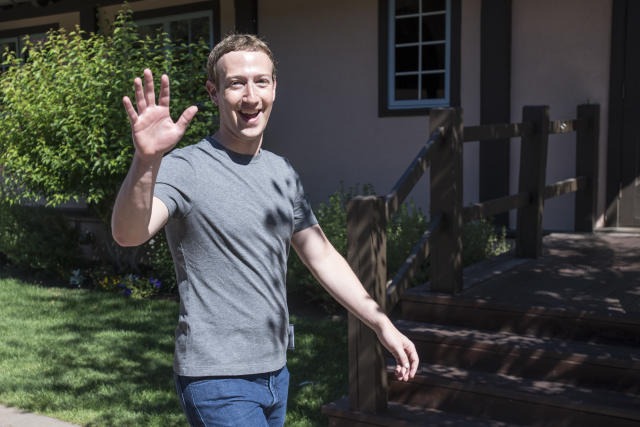 co-founder and CEO Mark Zuckerberg acknowledged the controversial impact of his platform in his message for the Jewish holiday of Yom Kippur, vowing to improve the components he described as divisive.
“For those I hurt this year, I ask forgiveness and I will try to be better. For the ways my work was used to divide people rather than bring us together, I ask forgiveness and I will work to do better,’ Zuckerberg wrote in a Facebook post on Saturday.
Yom Kippur is the holiest day of the year in the Jewish religion. Those observing the holiday fast for 25 hours, and spend the majority of their time in Synagogue, praying to God and repenting for the sins they committed in the past year.
Zuckerberg’s post comes as Facebook faces increasing scrutiny of its role in enabling Russian interference in the 2016 presidential election. The company acknowledged last month that nearly 500 accounts, which likely came from Russia, purchased $100,000 inFacebook ads during the 2016 election. Two weeks later, Zuckerberg outlined Facebook’s plan to combat Russian attempts to hack elections.
Zuckerberg concluded his post by wishing for everyone to be inscribed in the book of life, which, according to Jewish observance, determines your fate for the upcoming year.
See original article on Fortune.com


at October 02, 2017
Email ThisBlogThis!Share to TwitterShare to FacebookShare to Pinterest