oh really not the sharpest knives in the drawer 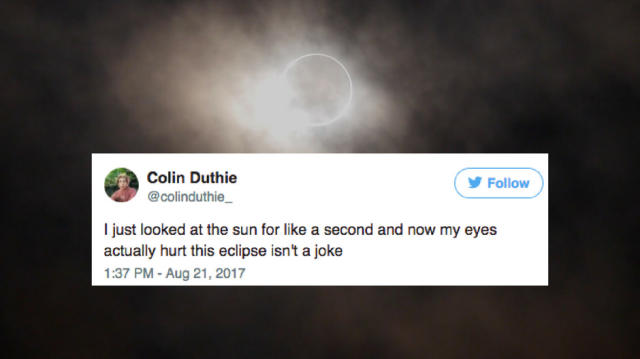 Many Americans experienced a really incredible solar eclipse on Monday and a fair amount of them have since been complaining on TwitterPrior to the eclipse, virtually every news site warned people of the havoc the event could wreak on their eyes if they stared at the sun without adequate eye protection.
Okay, but, really: How bad can it be for you to stare at it?
Jacob Chung, chief of ophthalmology at New Jersey’s Englewood Hospital, told USA Today that “a second or two” wouldn’t hurt you but “10 seconds is probably too long, and 20 seconds is definitely too long.” The result could be permanent damage to your retina.
And as for when that damage shows up? Well, Chung told the publication that blurry vision wouldn’t happen for “a day or two, after the affected area swells ‘like an egg yolk.’”
“It can take months, even a year, for eyes to return to normal,” he said. “If they do at all.”
Chung added that if you did suffer eye damage, you won’t necessarily feel any pain (fun fact: your retina doesn’t have pain receptors!). So, while we’d recommend those of you complaining about eye pain to go see a doctor, pain isn’t a good indicator of whether you’ve experienced retina damage.
If you’re still psyching yourself out, consider this study that looked into the “symptoms of 45 patients who reported to an eye center at a Leicester, U.K. hospital after viewing the 1999 solar eclipse.” A mere five had “visible damage to their retinas.” All of whom had indicated that they looked at the eclipse for 18 seconds or more.
So, all you concerned eclipse watchers with eye pain If you damaged your eyes, you’ll likely experience symptoms like altered vision today, but the odds are in your favor. If you didn’t stare at the eclipse for more than a few seconds, you’ll likely be A-okay.
Related:
For more news videos visit Yahoo View, available on iOS and Android.
This article originally appeared on HuffPost.
Celebrity

Oops! Odell Beckham Jr. appears to be that guy who looked directly at the solar eclipse

Like so many people around the country on Monday, Odell Beckham Jr. wanted to see the solar eclipse. He just appeared to do the one thing you’re not supposed to do during a solar eclipse: Look at it without protective glasses. Beckham posted this video to Instagram on Monday, and well, it will make Giants fans feel very uneasy. The star wide receiver appeared to be looking out his hotel window and straight at the sun for a solid 14 seconds. The sun is bright — even during a total solar eclipse — and looking at the sun for even seconds could lead to permanent eye damage. This warning comes via an optometrist to USA TODAY: Just seconds of exposure to a partial eclipse can “burn a blind spot
If you damaged your eyes, you’ll likely experience symptoms like altered vision today, but the odds are in your favor. If you didn’t stare at the eclipse for more than a few seconds, you’ll likely be A-okay.
Related:
For more news videos visit Yahoo View, available on iOS and Android.
This article originally appeared on HuffPost.


at August 22, 2017
Email ThisBlogThis!Share to TwitterShare to FacebookShare to Pinterest