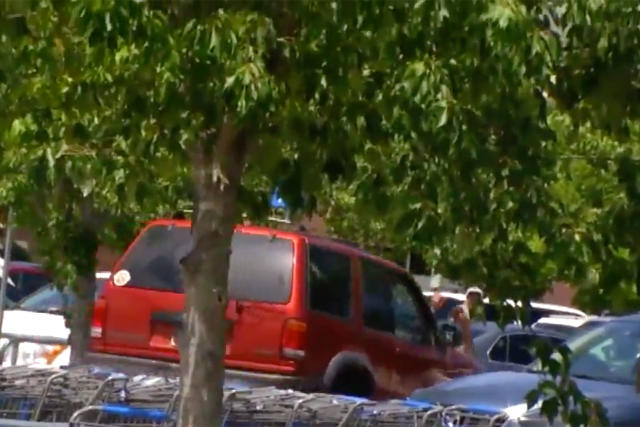 A pregnant woman was caught on camera chasing a man and hitting him with her red SUV in a Walmart parking lot in North Carolina.
Christine Braswell, 26, told WLOS-TV that a man was rifling through her SUV before the incident at about 12:30 p.m. on Wednesday.
Braswell said the man ran away with her purse, while she attempted to chase after him on foot. She changed her mind, and pursued him with her SUV because she is five months pregnant.
“He was with my purse and he took off and I took off after him,” she told WLOS-TV. “Me being five months pregnant, I chased a little ways then come back, jumped in the car, threw it in gear and come across the curb and ran him over.”
“I was not going to let him get away with it,” she added. “It’s not right, it’s not fair.”
An onlooker, Blake Bennett, told the news station, “When I walked out of Walmart, he had her purse and was pulling all of her stuff out. Then me and my friend told him to put it down and [said] ‘What are you doing?'”
The man was taken to the hospital after the incident, and only suffered minor injuries.
He was charged with felony breaking and entering, larceny and misdemeanor damage to property, according to WLOS-TV.
Braswell is charged with misdemeanor assault with a deadly weapon.
- June 29, 2017
Email ThisBlogThis!Share to TwitterShare to FacebookShare to Pinterest
Newer Post Older Post Home