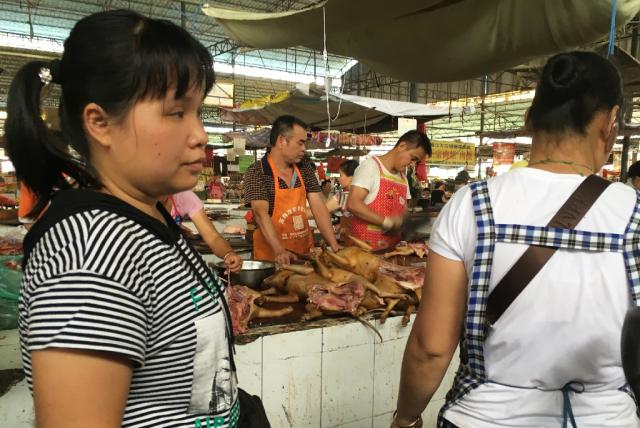 Yulin (China) (AFP) - A notorious Chinese dog meat festival opened on Wednesday with sellers torching the hair off carcasses, butchers chopping slabs of canines and cooks frying up dishes, dispelling rumours that authorities would ban sales this year.
After earlier reports of a sales ban at the summer solstice event in the southern city of Yulin, animal rights groups said vendors and officials reached a compromise and set a limit of two dogs on display per stall.
But multiple carcasses rested on several stalls at two markets, with stiff pointy tails, leathery yellow skin, eyes shut and bared teeth as if in a final growl.
Crowds of umbrella-toting festivalgoers braved the rain to stand in line outside popular restaurants, but animal welfare groups said sales appeared to be down this year.
Behind two long rows of dog butchers at the Nanqiao market, others sold cow tongues and pork hocks. But even they sold some dog parts, including liver.
Others offered poultry, vegetables and fruit, including big bundles of lychees, which are eaten alongside dog dishes.
There was a heavy police presence outside the market and at all intersections but officers did not seem to be checking stalls.
A man yelled at an AFP reporter at the Dongkou market, warning against taking photos and demanding that they be deleted.
Residents said dog meat was just part of their tradition.


Popular posts from this blog