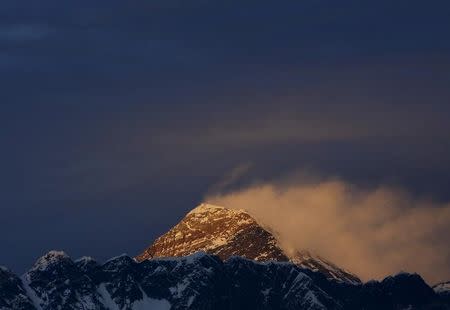 By Gopal Sharma
KATHMANDU (Reuters) - Nepali sherpas have found four climbers dead in their tents on Mount Everest, officials said on Wednesday, taking the death toll on the world's highest mountain to 10 in the past month.
The climbers were found overnight in two tents at Camp Four, at 8,000 meters (26,246 feet), Mingma Sherpa of the Seven Summit Treks group, to which the sherpas belonged, said.
The identities of the four remained unknown as none of the expeditions on the mountain reported any of their members missing and the head of the Nepal Mountaineering Association said they may have been climbing on their own.
"It is possible that some individual climbers obtained permits and were climbing without much support due to the cost factor," said Ang Tshering Sherpa.
"It was windy and very cold in the mountain yesterday (Tuesday). It appears they died due to suffocation as they must have been using a stove to keep warm inside the tent.”
The Himalayan Times reported that two of the dead were foreigners, but did not give their nationalities.
"It is most likely they died from carbon monoxide poisoning by using their stoves in the tent without proper ventilation," U.S. climber Alan Arnette, who blogs on Everest, said in a post.
The sherpas who discovered the bodies were on their way to retrieve the body of Vladimir Strba of Slovakia who died near the 8,850 meter (29,035 feet) summit over the weekend.
Strba's body has been brought down to Camp Two at 6,400 meters (21,000 feet) and was expected to be taken to base camp later on Wednesday, Mingma said.
More than 5,000 climbers have scaled Mount Everest since it was first climbed by New Zealander Edmund Hillary and Sherpa Tenzing Norgay in 1953. Nearly 300 have died trying.
Many of the victims remain on the mountain, entombed in snow, as it its too difficult to bring their bodies down.
Exhaustion, exposure, frostbite, falls and altitude sickness are major causes of death on Everest.
But the biggest killer in recent years has been avalanches.
Eighteen people died in 2015 when a 7.8 magnitude earthquake triggered avalanches which smashed into the base camp.
A year earlier, 16 sherpas hauling gear for climbers to higher camps were killed when they were hit by an avalanche while they were crossing the treacherous Khumbu Icefall, just above base camp.
Climbers can ascend Everest from the Nepal side and the Chinese side. One of the 10 recent deaths was on the Chinese side.
Nepal has issued permits to 371 foreign climbers this season, up from last year's 281, each of which cost $11,000.
In addition, hundreds of sherpas climb the mountain or help others to do so.
Permit fees are a major source of income for cash-strapped Nepal which earned more than $4 million this year from Everest permits, officials said.
The climbing season closes at the end of May when the rainy season traditionally begins, bringing cloud and snow at high altitudes.
(Reporting by Gopal Sharma,; Editing by Robert Birsel and Ed Osmond)
Newsweek 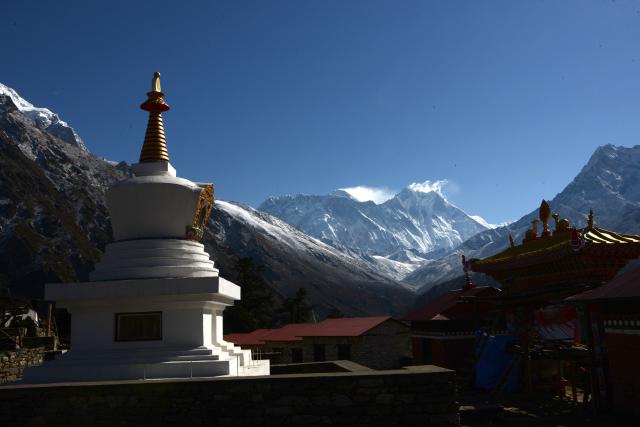 Nepali sherpas found four climbers dead in a camp on Mount Everest, officials said on Wednesday, taking the death toll on the world's highest mountain to 10 in the past month.
The bodies of the four climbers were found inside two tents at Camp Four, located at 8,000 metres (26,246 feet), overnight, Mingma Sherpa of the Seven Summit Treks group to which the sherpas belonged said in Kathmandu.
It was not clear how they died and their identities had not been established, Mingma, who like many sherpas is known by his first name, said.
Trending: Robert Reich: We’re Better Than Trump’s Cruel Budget
Ang Tshering Sherpa, the president of the Nepal Mountaineering Association, said it was windy on the mountain on Tuesday.
Ten climbers have died on Mount Everest, including one on the Chinese side, during this climbing season, which ends this month.
The sherpas who discovered the bodies were on their way to retrieve the body of Vladimir Strba of Slovakia who died near the 8,850 metres (29,035 feet) summit on the weekend.
Don't miss: Taiwan Celebrates Landmark Ruling on Same-Sex Marriage
Strba's body has been brought down to Camp Two at 6,400 metres (21,000 feet) and was expected to be brought down to base camp later on Wednesday, Mingma said.
Hundreds of climbers are attempting the summit from both the Nepali and Chinese routes this year.
More from Newsweek 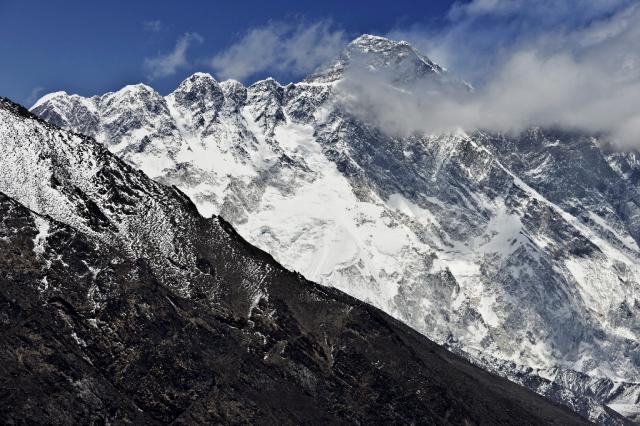 Kathmandu (AFP) - Rescuers have retrieved the bodies of two Indian climbers who died on Mount Everest last year but whose remains could not be moved due to bad weather, an official said Thursday.
A team of Nepali climbers retrieved the bodies of Goutam Ghosh and Paresh Nath from the balcony, an area just below the summit of the 8,848-metre (29,029-foot) mountain.
"Both the bodies are now in camp two in a place from where they can be airlifted. We are working out the logistics to bring them to Kathmandu," Sayeed Ahmeed Baba, an Indian official coordinating the operation, told AFP.
Nath's body was found last year but bad weather forced rescuers to abandon attempts to retrieve it. Ghosh's remains were only located this year by other climbers on the mountain.
"His body (Ghosh) was covered in snow and ice, so the team had to cut the ice to reach the body," Baba said.
Both bodies were found above 8,000 metres -- an altitude that marks the beginning of the "death zone" notorious for its difficult terrain and thin air as low oxygen levels heighten the risk of altitude sickness.
The retrieval of corpses from such a high altitude is a controversial topic within the climbing community.
Some rescue companies refuse to retrieve bodies at that altitude, saying it puts too many other lives in danger.
"We do not risk the lives of the living to recover the dead," Dan Richards, CEO of Global Rescue, one of the largest rescue firms in the Himalayas, told AFP.
"When it comes to recovering the dead there is an acceptable level of risk above which we do not go."
A separate team will ascend Everest on Thursday to retrieve the body of another Indian climber who died over the weekend.
Ravi Kumar, 27, died after summiting Everest and becoming separated from his guide. His body was spotted on Monday a few hundred metres from the main route climbers follow to the summit.
"It is a very tough operation, risky as well. The body fell about 200 metres from the route into a very difficult area at about 8,400 metres. It is not easy to pull out the body," said Thupden Sherpa of Arun Treks, the company coordinating the mission.
Six people have perished on Everest this season, including feted Swiss climber Ueli Steck who died during an acclimatisation climb in late April.