if you are illegal ...its a risk

ICE Officers Dined At Cafe, Then Arrested 3 Of Its Cooks, Owner Says 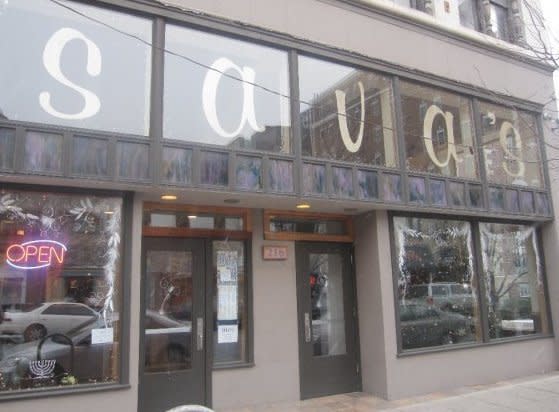 Federal immigration officers who took part in a “raid” at a Michigan restaurant Wednesday first sat and ate breakfast, according to the eatery’s owner.
Six U.S. Immigration and Customs Enforcement agents came to the Ann Arbor restaurant Sava’s on Wednesday morning, owner Sava Lelcaj said. Two officers were stationed at the front door, two stood at the back exit and two entered the restaurant and had breakfast at the bar with a view of the kitchen, other staff members told Lelcaj, who wasn’t present at the time.
The officers who came inside did not initially identify themselves as ICE agents. They dined on waffles with bacon and egg whites with toast before inquiring about a kitchen worker who was not there, Lelcaj told HuffPost.
About the same time, line cook Carlos Rivera-Ochoa took out the trash in the back when officers slapped handcuffs on him, according to Lelcaj. Rivera-Ochoa told MLive he carries his permanent residency card with him, and he was released shortly after being taken into a vehicle and fingerprinted.
But when three other cooks in the kitchen saw officers confront Rivera-Ochoa, they “panicked,” Lelcaj said, and ran out the front door and were then arrested.

We’re a really loving, peaceful town. It’s not the kind of place where you’d expect this kind of rampage to occur in a restaurant. Sava Lelcaj, owner of Sava's restaurant

Rachael Yong Yow, ICE public affairs officer, said the agents were “conducting a targeted enforcement action” and arrested the three men on immigration violations. Two men who were detained had unlawfully entered the country, Yong Yow said, and the third had entered lawfully “but did not depart in accordance with the terms of his status.”
She said all three were in ICE custody Wednesday evening, but Lelcaj said later that one of the employees had been released.
Lelcaj added that she conducts screenings when hiring employees and had believed that the men who were arrested were authorized to work in the U.S.
“Why would somebody innocent run? Because they felt intimidated,” Lelcaj said, describing the detainees as “victims of this raid.” “It’s a scary time. Even people with documentation … they’re scared to shit.”
President Donald Trump’s administration has cracked down on illegal immigration, fulfilling one of his campaign promises. In the first 100 days of his presidency, deportation officers arrested 41,000 people, a 38 percent increase compared with the same period last year. ICE is also arresting more non-criminals, up to 10,800 from 4,200 in the same period.
The White House has also come after sanctuary cities, jurisdictions that have immigrant-friendly policies, such as limiting cooperation between local law enforcement and ICE. Ann Arbor does not call itself a sanctuary city but has similar policies in place.
Ann Arbor police didn’t take part in the enforcement action or any earlier investigation, according to MLive.
“We’re a really loving, peaceful town,” Lelcaj said. “It’s not the kind of place where you’d expect this kind of rampage to occur in a restaurant.”
The restaurant owner said she’s now struggling to figure out how to make sure her employees, who come from many different countries, feel safe at work. With the kitchen down three cooks after the arrests, Rivera-Ochoa volunteered to return to work after his brief detainment, but he was “quivering,” Lelcaj said.
Lelcaj fled Albania in the 1980s with her family, living in a Serbian refugee camp for a year before spending her teens in the Bronx in New York.
“America accepted us and allowed us to come here and have a better life,” she said. “If I can do anything to make anyone’s American dream happen ... I will do it.”
This article originally appeared on HuffPost