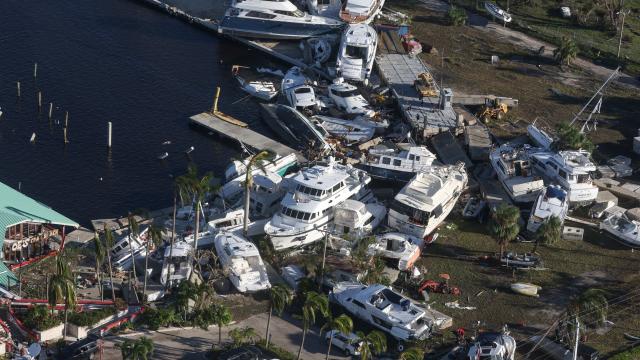 In the wake of major disasters like Hurricane Ian, which devastated large swaths of the Florida coast and caused at least 84 deaths last week, the goal of rebuilding what was lost often becomes a unifying mission for local residents and the country as a whole.

Both President Biden and Florida Gov. Ron DeSantis, who are on opposite sides of most issues, spoke recently of the enormous task that lies ahead if communities that experienced the worst wind damage and flooding are going to be revived. Their statements echo sentiments from political leaders after other disasters, including previous hurricanes, major storms elsewhere in the country and wildfires in Western states.

With climate change increasing the severity of hurricanes and wildfires, among other natural disasters, the sheer scale of rebuilding efforts has become enormous. Hurricane Ian alone is believed to have caused as much as $57 billion in damages, according to an estimate from the risk management firm Verisk. Since 1980 there have been more than 330 weather and climate disasters that each have caused more than $1 billion in damages, according to a database maintained by the National Oceanic and Atmospheric Administration. The costs are only getting bigger. In the 1980s, weather-related damages averaged about $20 billion per year. Over the past five years, that figure has reached almost $158 billion a year.

The escalating costs — let alone the extraordinary logistical and human challenges — of reviving communities after these increasingly common events has led many experts to raise an uncomfortable question: Should we rebuild in places that face a high risk of being destroyed again by a climate-fueled disaster in the near future?

Though they universally express sympathy for people who would be asked to abandon their homes for good, a number of experts say that it’s simply not feasible to keep pouring resources into communities that are directly in the likely path of future hurricanes and wildfires. They argue that people in these areas must stop treating major disasters as random events and instead accept the reality that climate change has made more catastrophic weather all but inevitable.