It's officially over for Tom Brady and Gisele Bündchen. After weeks of speculation, the superstars finalized their divorce after more than 13 years of marriage. Bündchen confirmed reports on Friday, writing they "have grown apart," but that she wishes "the best for Tom always."

"With much gratitude for our time together, Tom and I have amicably finalized our divorce. My priority has always been and will continue to be our children whom I love with all my heart. We will continue to [co-parent] to give then the love, care and attention they greatly deserve," Bündchen wrote on her Instagram Story.

"The decision to end a marriage is never easy but we have grown apart and while it is, of course, difficult to go through something like this, I feel blessed for the time we had together and only wish the best for Tom always," she continued. "I kindly ask that our privacy be respected during this sensitive time."

Brady issued his own statement on social media:

In recent days, my wife and I finalized our divorce from one another after 13 years of marriage. We arrived at this decision amicably and with gratitude for the time we spent together. We are blessed with beautiful and wonderful children who will continue to be at the center of our world in every way. We will continue to work together as parents to always ensure they receive the love and attention they deserve.

We arrived at this decision to end our marriage after much consideration.

Doing so is, of course, painful and difficult like it is for many people who go through the same thing every day around the world. However we wish only the best for each other as we pursue whatever new chapters in our lives that are yet to be written.

And we kindly ask for privacy and respect as we navigate what is to come in the days and weeks ahead. Thank you.

Yahoo Entertainment can confirm Bündchen filed in Glades County, Florida on Friday morning and Brady is not contesting the divorce. The case status is closed, meaning a judge signed off on paperwork already.

"The settlement is all worked out," a source told People earlier on Friday. "They've been working on the terms this whole time."

Terms of the settlement, like property and custody agreements, have been figured out and will remain confidential. They are parents to son Benjamin, 12, and daughter Vivian, 9, and will reportedly share joint custody.

Bündchen was the one reportedly spearheading the split. The 42-year-old environmental activist made the first move in hiring a divorce attorney and Brady followed suit. According to reports, the marriage was all but over by October and the two just had to hash out the divorce settlement.

Rumors of marital strife surfaced in August when Brady was excused from practicing with the Tampa Bay Buccaneers "to deal with some personal things." Sources claimed that Brady's sudden decision to end his retirement caused tension in their relationship, something the former Victoria's Secret Angel essentially confirmed.

"Obviously, I have my concerns — this is a very violent sport, and I have my children and I would like him to be more present," Bündchen told Elle in September. "I have definitely had those conversations with him over and over again."

Bündchen moved to Boston when the quarterback played for the New England Patriots and relocated again in 2020 to Florida when he signed with the Buccaneers.

"I've done my part, which is [to] be there for [Tom]," she added. "I moved to Boston, and I focused on creating a cocoon and a loving environment for my children to grow up in and to be there supporting him and his dreams."

Bündchen, who is also stepmother to Brady and Bridget Moynahan's 15-year-old son Jack, said she's "fulfilled" as a mother and wife. However, the model added that "now it's going to be my turn" as she has "a huge list of things" she wants to accomplish, especially with her environmental advocacy. Shortly after the interview was published, it was reported that Bündchen and Brady were living apart.

Brady announced his retirement earlier this year after 22 seasons, writing, "I have loved my NFL career and now it is time to focus my time and energy on other things that require my attention." The seven-time Super Bowl champion called out Bündchen and his children, noting his family is "my greatest achievement."

"I always came off the field and home to the most loving and supportive wife who has done EVERYTHING for our family to allow me to focus on my career. Her selflessness allowed me to reach new heights professionally, and I am beyond words what you mean to me and our family," he wrote.

While mulling retirement in 2021, Brady acknowledged that Bündchen, who quit the runway in 2015, paused her career in order to raise their family.

"I think my wife has, you know, held down the house for a long time now, and I think there's things that she wants to accomplish," he said during his Let's Go podcast. "You know, she hasn't worked as much in the last 10, 12 years just raising our family and kind of committing to being in a life in Boston and then moving to Florida. But that's an issue, and it's a very difficult issue to reconcile without just saying, 'Hey, it's time to retire.' And I think there's, you know, we're coming to the end here too, so I don't want to miss any of the kids' stuff."

This hasn't been the first time the superstars struggled in their marriage. In 2020, Brady admitted that he and Bündchen hit a rough patch years prior. "A couple years ago, she didn’t feel I was doing my part for the family," Brady told Howard Stern during a SiriusXM interview.

While playing for the Patriots, Brady pulled back from some organized team activities in 2018 and 2019. The athlete admitted he was "resentful" at first and that he and Bündchen attended counseling.

"She wasn't satisfied with our marriage," he added. "So I needed to make a change in that."

Brady and Bündchen started dating in 2006, shortly after he split from Moynahan who was unknowingly pregnant. Bündchen and the athlete were set up through a friend.

"I think the one phone call that changed my life was my friend Ed, who called me one day and he said, 'I have this girl and I think you should call her,'" the quarterback recalled to WSJ Magazine. "I ended up calling her and it ended up being the love of my life."

When the pair met in person, Bündchen believed it was love at first sight.

"I knew right way — the first time I saw him," she previously told Vanity Fair. "The moment I saw him, he smiled and I was like, That is the most beautiful, charismatic smile I've ever seen! We sat and talked for three hours... From the first day we met, we've never spent one day without speaking to each other."

The former couple celebrated their 13th wedding anniversary in February. 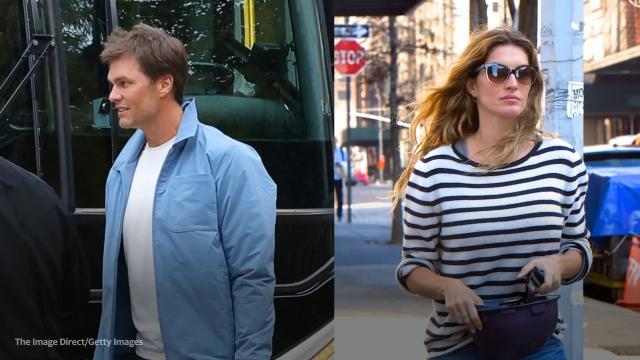 Tom Brady continues to follow Gisele Bündchen's lead. The Tampa Bay Buccaneers quarterback was photographed without his wedding ring, not once but twice, over the weekend, amid divorce rumors. The subtle statement comes after the supermodel was pictured without her sparkler on multiple occasions.