Is there such thing as a Joe Biden superfan?

Andrew Shaffer once thought of himself as a Joe Biden superfan. He bought aviator sunglasses just like Joe's, collected Biden action figures, wore Biden hoodies, knew the arcana of Biden's personal and political life, and set out to write a noir novel starring a character named Joe Biden. He thought of Biden as a "cool uncle" who might offer a spin in his Corvette or treat for ice cream.

Then Biden became president, and Shaffer lost his zeal for Joe. What had made Biden so compelling - falling painfully short of achieving his ultimate political goal - vanished once he made it to the White House. "All of a sudden he went from being the fun uncle to dad," Shaffer, 43, said recently from his Louisville, Ky., home. "Everyone always prefers the fun uncle." He isn't even sure if he would support Biden for re-election.

A hallmark (or pathology, depending on your perspective) of contemporary American politics is the outsize presence of the superfan - specifically the hat-wearing, boat-parading, election-denying and Capitol-storming followers of Donald Trump, who only became more zealous once he won the presidency (and especially after he lost it). Most recently, a crowd of Trump superfans assembled outside Mar-a-Lago to proclaim their undying devotion to the former president after the FBI searched his residence on suspicion that he had improperly taken classified documents from the White House.

0:00
3:30
- President Biden has generally
had a pretty difficult first, 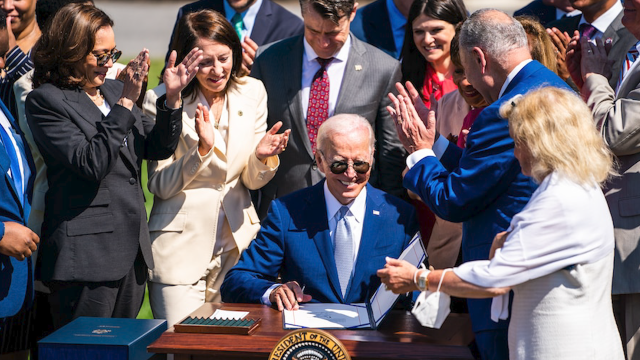 Joe Biden inspires no such idolatry. Yes, there are Democrats sharing "Dark Brandon" memes (a Biden-inspired comic villain appropriated from the right) on social media, but not many are bedecking their homes with "Biden 2024" flags or insisting that he's some kind of savior. Most Democratic candidates now running in midterm races aren't exactly inundating the president with invitations to campaign with them. And, according to polls conducted earlier this summer, Democrats are ambivalent about whether they even want Biden to be their party's nominee in two years. Yes, a string of legislative victories may have boosted Biden's approval ratings. But Biden's fans, unlike Trump's, seem far less likely to landscape his name in large letters across acres of farmland or erect a 14-foot steel cutout of his likeness on their lawn.