KABUL is in the middle of a horrifying drug addiction epidemic where even dogs are hooked on heroin and bodies of overdosed Afghans litter the streets.

Haunting images have emerged showing the rampant drug addiction plaguing thousands in the capital after years of war and the return of the Taliban.

Hundreds of men and women high on heroin, opium and meth were pictured strewn across a hillside overlooking Kabul as drugged dogs skulked around.

The bodies of overdosed dogs could also be seen amid the rubbish.

The growing numbers of addicts are found living in parks and sewage drains, under bridges, and on open hillsides in Kabul.

Drug addiction has long been a huge problem in Afghanistan - the world's biggest producer of opium and heroin and now a major source of meth. 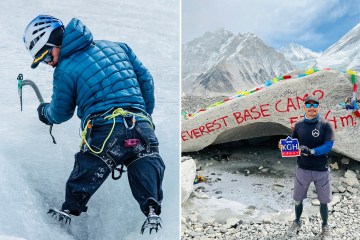 The ranks of the addicted have been fuelled by persistent poverty and decades of war that left few families unscarred.

And it appears to only be getting worse after the country's economic collapse following the Taliban takeover in August last year.

Families that were once able to get by found themselves out of work, leaving many barely able to even afford food.

Millions more Afghans have been plunged into poverty - and many have turned to drugs to escape their crushing problems.