A man drowned in an Arizona lake last month and as he pleaded for help, struggling in the water, local cops standing by refused to rescue him, according to officials and a police body camera footage transcript.

"I'm drowning," Sean Bickings, 34, told Tempe Police Department officers during the May 28 incident at Tempe Town Lake, according to a video transcript released by the city and reviewed by Insider.

One officer responded to Bickings, "Okay, I'm not jumping in after you," moments after another cop instructed Bickings to head over to a pylon, the transcript shows.

Bickings, whom city officials described as an "unsheltered Tempe community member," ultimately drowned after he jumped into the lake but wasn't able to swim.

Tempe police referred Insider to the city when asked for their response to the incident. In a statement, Tempe City Manager Andrew Ching and Police Chief Jeff Glover called Bickings' death "a tragedy." 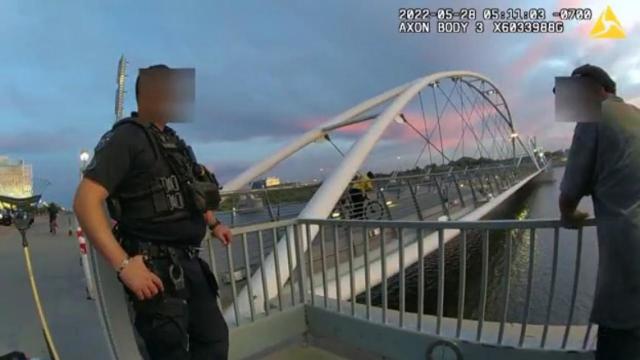 The Tempe Police Department released bodycam footage of the moments leading up to the drowning of a man in Tempe Town Lake on May 28. The incident began as an apparent domestic violence situation between the man, identified as Sean Bickings, and his wife.

Police body camera footage released by the city shows what led up to the moments before Bickings jumped into the water.

Tempe cops were called to the scene just after 5 a.m. on May 28 about a reported dispute between Bickings and a woman who identified herself to cops as his wife, officials said.

When officers arrived, they spoke to Bickings and the woman, who officials say cooperated with police and denied that any physical confrontation had taken place.

"He didn't do nothing wrong. We have a bad habit of interrupting each other sometimes," the woman told cops, according to the police body camera video.

Our goal is to create a safe and engaging place for users to connect over interests and passions. In order to improve our community experience, we are temporarily suspending article commenting
Laura Daniella Sepulveda, Arizona Republic
Mon, June 6, 2022, 9:15 PM

Tempe released edited body camera footage from officers that shows a man drowning in Tempe Town Lake as officers watched and did not step in to help.

The victim was identified as Sean Bickings, 34. According to a transcript of the footage provided by the city, Bickings told Tempe police he was drowning and begged officers for help as they stood by and told him they were not "jumping in after you."

Bickings was an unsheltered member of the Tempe community, the city said in a statement released on Friday.

The three officers who responded to the incident are currently under non-disciplinary administrative paid leave.

Body camera footage shows officers responding to a report of a verbal domestic confrontation on May 28 around 5 a.m. at the Tempe Center for the Arts located at 700 W. Rio Salado Parkway.

The video shows officers speaking separately to Bickings and to a woman who identified herself as Bickings' wife.

The woman told officers she and Bickings had engaged in a discussion but that he had not been physically violent.

An original statement from the Tempe Police Department indicated Bickings had jumped into the lake in an attempt to evade police after officials did a background check and found three outstanding warrants.

Police had originally stated Bickings started running and jumped over a fence and into Tempe Town Lake, just east of the pedestrian bridge.