Straight to jail its a federal offence ....no if's and's or butts .......a mail man  works for the federal govt he knows the rules ....i always think of newman when someone  says post office

A 27-year-old postal service employee was arrested at the Canadian border Tuesday after investigators found that he had more than 800 pieces of undelivered mail — including absentee ballots — in his trunk, according to a criminal complaint filed in federal court.

Brandon Wilson was stopped at Peace Bridge, the Buffalo, New York, roadway connecting US and Canada, by Customs and Border Protection agents. When they found the bin of mail, Wilson told them that it belonged to his mother and himself, but couldn't explain why the letters were addressed to other people and a variety of zip codes, according to the complaint obtained by Insider.

Video: The rise and fall of USPS 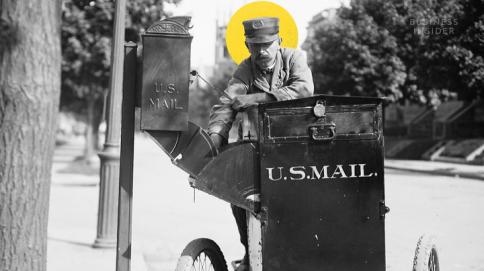 Wilson, who was hired by the USPS in 2019, told border agents he wasn't headed for Canada, but made a wrong turn that landed him at the bridge.

He told investigators that he "intended to deliver the mail and had forgotten to return the mail pieces to the post office," Boone wrote.

He said he had placed bins of mail in the trunk of his car more than four times, but less than 10, after returning from his assigned route. The plan was to whittle down the amount of mail in his trunk by returning a small amount of it to the USPS facility each morning before his shift, Wilson told the special agent.

Wilson denied to investigators that he had stolen any greeting cards, cash or gifts from his route, or that he knew there were election ballots in his trunk.

He was charged with delaying or destroying mail and appeared in US District Court for the Western District of New York by teleconference on Wednesday.

A spokesman for the USPS told The Buffalo News Wilson was assigned to "emergency placement," meaning he will be off-duty without pay.

The USPS has come under fire leading up to Tuesday's election over its handling of mail-in ballots.

Several civil rights groups have sued the agency, seeking that it deliver ballots in a timely manner.

Mail delivery has slowed this year in the US.

at November 06, 2020
Email ThisBlogThis!Share to TwitterShare to FacebookShare to Pinterest