All this is doing is making BLM more of a terrorist movement........ and they are achieving nothing ............which will be their  demise ...we all know that is run by george soros ..........and other money people ...their goal is intimidation .... and destruction .......its not about  black lives ...it's about the destruction of society and blaning on the balck culture ...which will cause more unrest .....but if you can only be propelled  by hatred ....broken families  ...uneducation ......no father......... but they will bring on bad publicity for african americans ...the only thing they are doing is creating more racial divide....its giving black people a bad name ....and creating racial divide .... 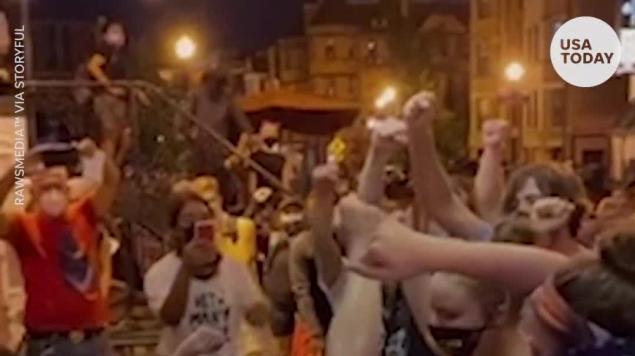 Video Not Available
Unfortunately, this video is missing or damaged and cannot be played.
SS-501-300
Video of Black Lives Matter protesters confronting diners at a Washington, D.C., restaurant went viral Tuesday night and drew backlash online.
The incident, captured by The Washington Post reporter Frederick Kunkle, showed a group of white protesters demanding a woman on a restaurant patio in Adams Morgan raise her first in solidarity. The woman, identified by Kunkle as Lauren B. Victor, refuses as the crowd chanted refrains including "white silence is violence" and "no justice, no peace."
Victor, a 49-year-old urban planner and photographer, told the Post she wasn't frightened and that she had marched in previous Black Lives Matter demonstrations. But, she said in that moment she felt it was wrong for the crowd to surround them and try to coerce them into showing support for the movement.
“I felt like I was under attack,” Victor said. “It just felt overwhelming to have all of those people come at you. To have a crowd – with all that energy – demand that you do this thing. In the moment it didn’t feel right."
2 shot dead, 1 injured in Kenosha: Police looking for man with long gun after third night of Jacob Blake protests
The video shared by Kunkle has nearly 10 million views and drew criticism online. Video from a similar scene shared on Twitter earlier this week appears to show another group confronting a pair of diners seated outside a restaurant in the nation's capitol who also decline to raise their fists.
The demonstration Tuesday evening was one of several that rocked the nation in protest of the police shooting of Jacob Blake in Kenosha, Wisconsin. Two people were killed in Kenosha during protests overnight, and Blake is reportedly paralyzed from the waist down.
Contributing: The As

at August 26, 2020
Email ThisBlogThis!Share to TwitterShare to FacebookShare to Pinterest