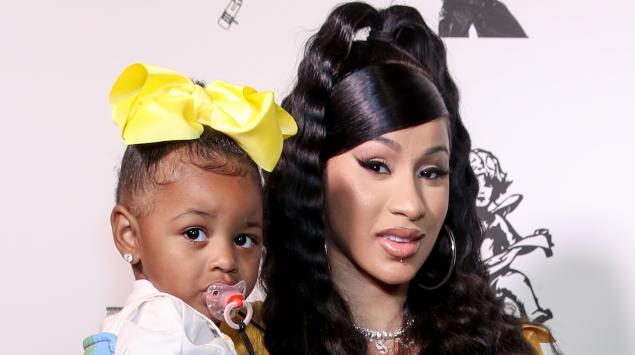 The "Press" rapper defended Offset in a series of Instagram Stories videos posted in the early hours of Thursday (July 16) after his followers slammed him for giving their little girl an Hermes Birkin bag for her second birthday.
Cardi B has stepped in to defend her husband, Offset, after he gave their two-year-old daughter, Kulture, a Hermes Birkin bag worth over £10,000.
The bags, which are named after actress, Jane Birkin, are considered by fashion lovers around the world as collectors items, which is the reason behind their high value.
The rapper shared a video on Instagram of him gifting the pink bag to his two-year-old.
He captioned the video: “Late is better then never I Birkin my baby,” but confused fans commented that Kulture had no idea what the bag was.
Later in the day, Cardi B, 27, went onto Instagram Stories to defend Offset’s decision to buy their daughter the bag.
Read more: Cardi B unveils giant back tattoo
In the series of videos, Cardi B said: “I know when celebrities buy their kids jewellery and designer s**t, people be like ‘kids don’t care about that, they only care about toys and candy.’
“But the thing is, kids also go outside. Kids go to restaurants, kids go to fancy places. Celebrity kids, they go do red carpets.
“And if I’m fly, and daddy’s fly, then so is the kid. If I’m wearing Cha-nay-nay (Chanel), my kid’s having the same thing. It’s not up to what the kids like. If it was the kids, they’d be outside in diapers.
“No, cause if I was looking like a bad b**ch, expensive b**ch, and I had my kid looking like a bum bum, then y’all would be talking s**t.
“So, I’m not mad that daddy bought baby a Birkin. She’s gonna match mommy.”
The series of videos didn’t go very far to satiate the masses, who shared their thoughts on the purchase under Offset’s Instagram post.
Read more: Cardi B wears sheer bodysuit and helmet mask
“She’s about to put crayons, snacks, wrappers and some open gummy candies in a purse that’s worth more than my life on the black market,” one of the most liked comments said.
“She doesn’t even know what she just got,” another said in response to Kulture seemingly placing the bag back in the box after two seconds.
“She just wants toys,” another observed.
The choice of present did go down well with many people, though, who said that she might not appreciate it now, but she will when she’s older.
Cardi B only recently posted a photo of herself wearing a vintage Chanel dress and aqua green Birkin, showing that expensive taste really does run in the family.

July 16, 2020, 10:12 AM
Bye, haters. Cardi B defended Offset after he bought Kulture a Birkin bag for her 2nd birthday. The “Bodak Yellow” rapper took to her Instagram Stories on Wednesday, July 15, after she and her husband faced criticism for Offset’s expensive gift for their 2-year-old daughter.
The drama came after Offset took to his Instagram on Wednesday to post a video of him giving Kulture a pink Birkin bag as a belated birthday present. (The toddler turned 2 years old on July 10.) The video features Kulture in a fairy costume and bunny ears as she watches her dad open up a package that contains a blush pink Birkin bag. “Late is better then never I Birkin my baby,” Offset wrote in the caption, to which Cardi’s sister, Hennessy Carolina, commented, “.”
As...
Continue Reading 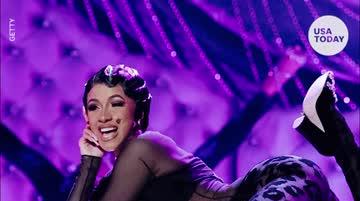 Rapper Cardi B has a lot to say. But these 4 words, she defined.
Cardi B and Offset's daughter, Kulture, received quite a surprise gift on her birthday: an $8,000 Birkin bag.
The proud father and Migos rapper took to Instagram on Wednesday to share a video of himself unboxing the pricey gift for his daughter, who turned 2 on July 10, commenting "Late is better then (sic) never I Birkin my baby."
"Okay girl, I see you, you beautiful baby," he cheers in the video. Kulture, wearing a pink fairy costume, holds the bag, only to hilariously drop it back in the box moments later.
While some fans made jokes about the extravagant present, many criticized the parents on social media for giving their toddler the pricey purse for her birthday


- July 17, 2020
Email ThisBlogThis!Share to TwitterShare to FacebookShare to Pinterest