July 16, 2020, 7:09 PM
And we can't forget that the US is helping
Zuckerberg says Fauci is being ‘quite generous’ in his description of the Trump administration’s COVID-19 response
Yahoo News Video 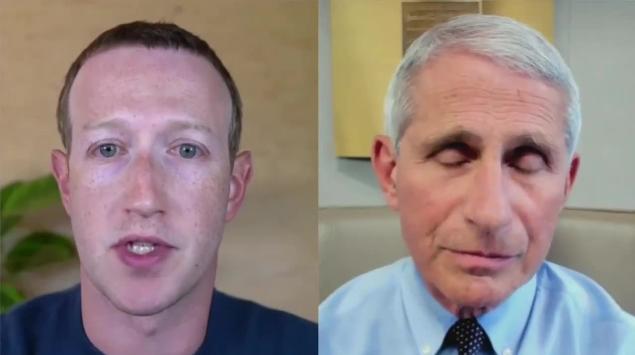 Scroll back up to restore default view.
In a wide-ranging discussion Thursday with Dr. Anthony Fauci, Facebook founder and CEO Mark Zuckerberg noted that the U.S. response to the coronavirus pandemic — in which more than 138,000 Americans have died — has been “significantly worse” than in the rest of the world. Fauci did not disagree, but said the nation needs to “call a time-out” to “regroup.”
“While every other developed country in the world, or almost every other country, has had a relatively smaller number of new infections, we now face a record number of new infections every day,” Zuckerberg said near the start of the nearly hourlong discussion, which was carried live on Facebook. “At this point it is clear that the trajectory in the U.S. is significantly worse than many other countries and that our government and this administration have been considerably less effective in handling this. I personally think we need to take this a lot more seriously and our understanding of the disease is evolving and our response needs to be guided by science and our latest scientific understanding.”
Zuckerberg asked Fauci what we needed to do as a nation to improve.
“As you described accurately, Mark, we do have a serious situation now. I mean, it’s a mixed bag. There are parts of the country that are doing well, the Northeastern part, particularly the New York metropolitan area, was hit very hard,” Fauci responded, adding that we needed to pay more attention to the Southern states, where cases and deaths were spiking, and took issue with local officials who enacted insufficient social distancing restrictions and rushed to reopen society. “We’ve really got to regroup. Call a time-out. Not lockdown again, but say ‘We’ve got to do this in a more measured way. We’ve got to get our arms around this and we’ve got to get this controlled.”
Zuckerberg said he agreed with the need for a reset, but didn’t back away from his criticisms of the Trump administration.
“I was certainly sympathetic early on when it was clear that there would be some outbreaks no matter how well we handled this,” Zuckerberg told Fauci in a conversation that was broadcast live on the social media network, “but now that we’re here in July I just think it was avoidable and it’s really disappointing that we still don’t have adequate testing, that the credibility of our top scientists like yourself and the CDC are being undermined and, until recently, that parts of the administration were calling into question whether people should even follow best practices like wearing masks.”
Members of President Trump’s administration have attacked Fauci in recent days, circulating to reporters a list of statements the infectious disease specialist has made since the emergence of the pandemic that they claim were wrong.
“That’s really the nature of science,” Fauci replied. “You look at the information and the data that you have at any given time, and you make a decision on policy based on that information. As the information changes, then you have to be flexible enough and humble enough to change how you think about things.”
Earlier on Tuesday, House Speaker Nancy Pelosi also criticized Trump for not heeding the advice from scientists on how to safely reopen society, including the nation’s schools.
“Mr. President, admit it: You’ve gone down the wrong path. Ask for direction. Ask for direction from our scientists,” Pelosi said.
With the number of cases spiking in dozens of states across the country, Zuckerberg asked Fauci what steps he thought the country should take in order to reset our response to the pandemic.
“I would recommend as strong as possibly can to get people to wear masks,” Fauci said, “to avoid crowds, to keep distances — outdoors always better than indoors.”
White House press secretary Kayleigh McEnany was asked by Yahoo News on Thursday whether Trump planned on issuing a nationwide order requiring face masks.
“We leave it to localities to make the decisions with regard to face coverings. [Centers for Disease Control and Prevention] guidelines remain the same today: recommended but not required,” McEnany said.
Over the course of the past week, Trump has pushed states to reopen public schools and has threatened to withhold federal funding to those districts that refuse. Fauci said that he agrees with making reopening schools a priority, but stopped short of Trump’s call to resume in person classes despite the health risks.
“To the extent possible, our default should be to try and get the children back to school. The reason I say that is that the unintended ripple effects, downstream consequences of keeping the children out of school can be profound,” Fauci said, while warning that the virus was spreading too fast in some areas to do so fully.
Fauci said some districts should look at modifications to a full reopening, including staggering attendance, separating students with compromised immune systems and holding classes outside. “It can b