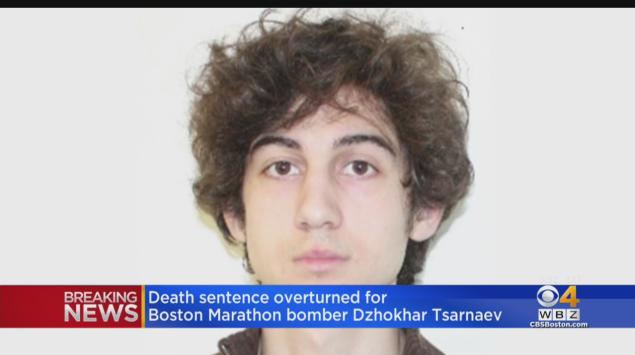 Scroll back up to restore default view.
A federal appeals court has overturned the death sentence of Boston Marathon bomber Dzhokhar Tsarnaev, citing a tainted jury.
The 1st U.S. Circuit Court of Appeals in Boston upheld much of the conviction butordered a retrial for the sentencing portion of his death-penalty eligible crimes.
Tsarnaev and his older brother Tamerlan Tsarnaev set off two pressure-cooker bombs near the finish line of the 2013 Boston Marathon on April 15, killing three and wounding more than 260 others, some of whom lost their legs.

A Boston jury convicted Tsarnaev on all 30 charges he faced in 2015, including conspiracy and use of a weapon of mass destruction. He received the death penalty for the fatal injuries to 8-year-old Martin Richard and 23-year-old Lingzi Lu caused by the bomb he placed.
Krystle Campbell, 29, died from a bomb placed by Tamerlan. The attack initiated a manhunt in Boston that ended for Tamerlan three days later after the brothers fatally shot MIT police officer Sean Collier and hijacked a car. Tamerlan was killed after the hijacking in a shootout with police that ended with Dzhokhar running him over with the car.
Tsarnaev escaped before police eventually found him hiding in boat parked in a residential yard in Boston. He was convicted and sentenced to death in 2015 and has served time in a federal supermax prison in Colorado since.

Why judges ruled against death penalty

A panel of three judges ruled on Friday that the jury that convicted him was tainted by the intense news coverage in the aftermath of the bombing and ensuing manhunt.
U.S. Circuit Judge O. Rogeriee Thompson wrote in the 182-page ruling that the trial judge "fell short” of eliminating biased jurors during the jury selection process.
"Despite a diligent effort, the judge here did not meet the standard set," Thompson wrote.
Tsarnaev’s lawyers argued that the jury foreperson tweeted 24 times about the bombing in its aftermath, one of them referring to Tsarnaev as “piece of garbage” after he was captured. The judges agreed in a unanimous opinion that the death penalty portion of the case should be retried because of a flawed jury selection process.

‘The defense warned the judge’