covid or hoax ......someone is fudging the numbers

Trump identifies another hoax: The coronavirus

July 13, 2020, 11:26 AM
and on a much lesser problem
than the problem that we have,
Trump's bizarre COVID-19 claim: 'Biden and Obama stopped their testing'
Yahoo News Video 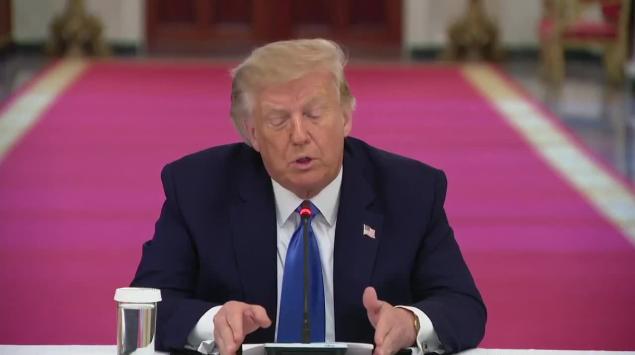 Scroll back up to restore default view.
President Trump has called many things hoaxes over the years — the investigation into his 2016 campaign’s dealings with Russia, his impeachment, global warming — but on Monday he called into question the existence of an epidemic that has killed more than 135,000 Americans.
During a flurry of activity on his Twitter account, Trump retweeted a message from game show host Chuck Woolery that claimed “everyone is lying” about the coronavirus as part of a plot to sabotage the economy and hurt Trump’s reelection campaign.
“The most outrageous lies are the ones about Covid 19,” wrote Woolery in the message promoted by Trump. “Everyone is lying. The CDC, Media, Democrats, our Doctors, not all but most ,that we are told to trust. I think it’s all about the election and keeping the economy from coming back, which is about the election. I’m sick of it.”
Asked about the retweet at a briefing later Monday, White House press secretary Kayleigh McEnany said that the “notion of the tweet was to point out the fact that when we use science, we have to use it in a way that is not political.”
A key problem keeping the economy from coming back is the 135,000 Americans dead from the coronavirus, per tracking by Johns Hopkins University, which reported 61,352 new cases and 685 deaths on Saturday. Woolery didn’t say whether he thought the death toll was faked. Florida set a record for most single-day cases of any state so far with more than 15,000 reported Saturday, the same day Walt Disney World reopened in Orlando. Arizona, California, Florida, Mississippi and Texas have all set record highs for daily deaths over the last week.
Trump sometimes uses “hoax” as an all-purpose denigration of opinions — or facts — he doesn’t like. In February he called criticism of his administration’s response to the coronavirus the Democrats’ “new hoax,” but he didn’t quite deny the existence of the epidemic, as Woolery appeared to do in his tweet.
There is no obvious precedent for a president repeating criticism that a key agency in his own administration — the Centers for Disease Control and Prevention — is lying, except for Trump himself, and the many times he has accused the FBI and the intelligence services of intentionally undermining him.
Around the same time, Trump’s former acting chief of staff Mick Mulvaney, who belongs to none of the categories Woolery said were telling “outrageous lies” about COVID-19, signified that he took the pandemic seriously. In an op-ed published on the CNBC website, Mulvaney wrote: “I know it isn’t popular to talk about in some Republican circles, but we still have a testing problem in this country. My son was tested recently; we had to wait 5 to 7 days for results. My daughter wanted to get tested before visiting her grandparents, but was told she didn’t qualify. That is simply inexcusable at this point in the pandemic.”
Trump also retweeted Woolery’s statement “There is so much evidence, yes scientific evidence, that schools should open this fall. It’s worldwide and it’s overwhelming. BUT NO.”
The mortality rate in children is lower from the virus, but there’s still much researchers don’t know about COVID-19, including the potential long-term effects on children and their ability to spread it to older, more vulnerable relatives and caregivers. Teachers’ unions say their members are reluctant to return to classrooms until the epidemic is under control. On Friday, the American Academy of Pediatricshedged its initial plan for in-person schooling by releasing a statement that said, “Public health agencies must make recommendations based on evidence, not politics” and “Science and community circumstances must guide decision-making.”
It’s accurate that other countries are planning to open schools in the fall, but they did a better job at suppressing the virus through testing, contact tracing and communicating the importance of masks than the U.S. government.
Trump has downplayed the deaths of Americans previously while in office, stating that the death toll in Puerto Rico from Hurricane Maria wasn’t as high as multiple studies concluded after the White House’s slow response to the natural disaster was criticized.
“3000 people did not die in the two hurricanes that hit Puerto Rico,” Trump said in September 2018, a year after the storm. “When I left the Island, AFTER the storm had hit, they had anywhere from 6 to 18 deaths. As time went by it did not go up by much. Then, a long time later, they started to report really large numbers, like 3000.”
The official Hurricane Maria death toll, according to the Puerto Rican government, is 2,975. That number, calculated by researchers with the Milken Institute School of Public Health at George Washington University, is lower than that of a Harvard study, which put the number at 4,645. Either number would make Maria the deadliest natural disaster in the United States in over a century.
The president has consistently called the investigation into Russia’s influence on the 2016 election a hoax, but special counsel Robert Mueller’s team found evidence there was foreign interference and contact between Trump adviser Roger Stone and Russian intelligence officers.
- July 14, 2020
Email ThisBlogThis!Share to TwitterShare to FacebookShare to Pinterest