you see you will never stop a stripper  getting her hands on your cash....those girls are relentless  they love cash ....power of the pussy ..... 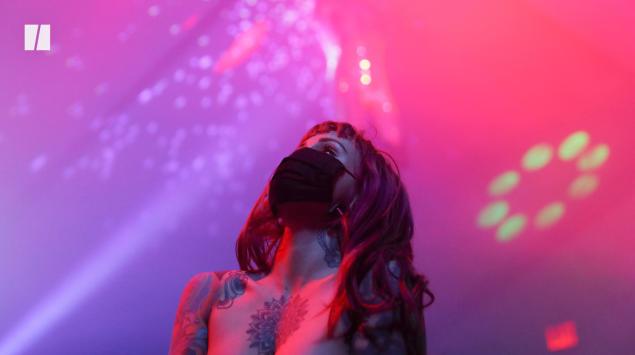 A strip club in Oregon turned its business into a food pick-up and delivery service so that exotic dancers can still put on a show during the coronavirus pandemic.
Shon Boulden shouldn’t be all that busy these days. He owns two strip clubs in Portland, Oregon, both of which were deemed “nonessential” in March, along with many other businesses in the state, and were ordered to close due to the spread ofCOVID-19.
But when HuffPost spoke to him late last week, he was working overtime to  juggle media requests and prepare for another weekend of “Drive Thru Food 2 Go-Go,” a drive-thru version of his club Lucky Devil Lounge that he recently launched ― to lines around the block.
Boulden, his clubs and its employees first made headlines (including on this website) in March when, as a way to stay open and continue to bring in income during the government-mandated shelter-in-place order, dancers from the clubs began working as delivery people, with security guards serving as drivers. Many orders and one cease-and-desist letter from Uber later (“Boober Eats” was the service’s original name), they’ve now come up with an even more ... revved up tactic to keep business booming.
“Since food delivery started we’ve had a lot of local businesses showing us support and wanting to collaborate,” Boulden said. “A local event company that sets up stages, tents, things like that, called us up and were like, ‘We’re out of business, we’re not doing anything.’ They offered to build us a huge tent, two stages, a DJ booth, a couple of stripper poles with lights, lasers, fog machines and were like, we’ll just see how it goes.”
Here’s how the new drive-thru works: You pay $30 to enter and can order any food item off the menu. Once inside the tent, you’re treated to a full show, from a group of (masked, of course) dancers. They do a song or two for each car, and then they send you on your way with your food. There are tip buckets set up inside, and the dancers even have devices normally used to collect trash that allow them to collect tips from a distance.
The drive-thru has proven even more lucrative than the original food delivery program, though they’re still providing that service, too.
“We had a nonstop line of cars wrapped around our parking lot Saturday night,” Boulden said, adding that the new attraction is drawing visitors from beyond just the Portland area.
“We had a carload of girls from Seattle ― two and a half hours away ― do a road trip down to Portland to our drive-thru just to get some food and see this going on,” Boulden said. “It’s crazy.”
For the employees, Food 2 Go-Go is more than just a way to keep money coming in — it’s a way to get back to some sense of normalcy and creativity as Brodie, who celebrated her birthday on stage last week, explained to HuffPost.
“It feels amazing. It’s still not enough, but it feels so good to move,” she said. “I woke up the next day and was actually sore ― it had been so long [since I last danced]. I just need this right now.”

- May 06, 2020
Email ThisBlogThis!Share to TwitterShare to FacebookShare to Pinterest