I will say this ......everyone needs to sue this despicable fucking country....they are a country of thieves ...liars....... all they do is poison .........everything...... destroy everything .......build empty cities .......airports .....don't use them ...use children in sweat shops...... and kill every animal they touch ......
They are the worst human beings on the planet ......they don't give a shit about anything...... or anyone and they are the most racist of all people in the world .......
they are to blame completely for this pandemic because of their ignorant servile culture .....a culture of  ignorance ....hatred and  total disregard for life on any level.....they just dont care and should be  held accountable  ...to a point where they are barred from travel and made to pay for what they have  done ......i despise the culture .....and the ignorance of his  country .....they pollute and destroy  ......instance look at the dam on the Yangtze river....... they flooded .......and ruined  historical buildings...... because they don't  care...... about anything ....they are the most  servile people on the planet  ....and their ignorance and arrogance  has to have  consequences 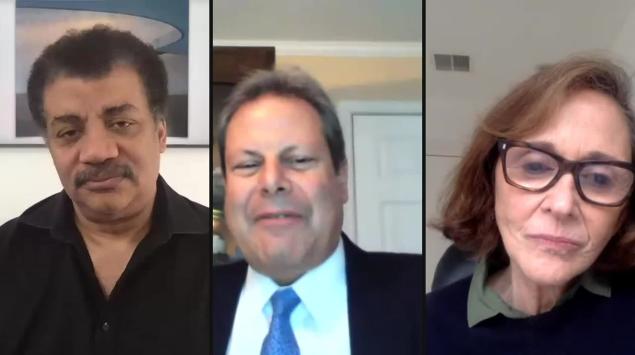 DeGrasse Tyson: Coronavirus is experiment in whether world 'will listen to scientists'

Astrophysicist Neil deGrasse Tyson and Ann Druyan, creator of National Geographic's "Cosmos" series, discuss the importance of science in age of COVID-19.
There are many lessons to be learned from the Wuhan coronavirus pandemic. But one is already clear: China needs to be isolated from the civilized world until its behavior improves. We are in the current situation, with deaths and economic devastation worldwide, because China handled this outbreak with its trademark mixture of dishonesty, incompetence and thuggery. Were China a more civilized nation, this outbreak would have been stopped early, and with far less harm, inside and outside of China.
As Marion Smith wrote in these pages on Sunday, China’s first response was to clamp down on reports of the then-new disease that had appeared in Wuhan. The brave doctor, Li Wenliang, who first reported the disease to fellow physicians was silenced by police. Chinese media reports of the disease were censored by the government. So were ordinary citizens reporting on social media.

According to U.S. intelligence agencies, China systematically deceived the world about the extent of the outbreak, lulling other nations into a false sense of security that delayed a response by weeks or even months.
As Smith writes: “Beijing denied until Jan. 20 that human to human transmission was occurring. Yet at the same time, Chinese officials and state-owned companies were urgently acquiring bulk medical supplies — especially personal protective equipment like masks and gloves — from Australia, Europe, and around the world. Put simply, Beijing hoarded the world’s life-saving resources while falsely claiming that people’s lives weren’t at risk.”
Marion Smith: Blame the Chinese Communist Party for the coronavirus crisis
And this is the most charitable account, based on China failing to deal with what was, at root, a naturally occurring disease outbreak. And it may have been naturally occurring. But people are increasingly entertaining the possibility that the COVID-19 virus was accidentally released by a Chinese virology lab in Wuhan.
That notion was once dismissed as a conspiracy theory, but it has since been discussed in the Bulletin of the Atomic Scientists and by uber-establishment Washington Post columnist David Ignatius. The talk is of an accidental release, not the deliberate deployment of a biological weapon — which makes sense, since few nations would release a bioweapon in their own heartland — but if it’s true it only makes the Chinese government look worse, though it perhaps explains their unwillingness to be forthcoming.
But wherever the virus came from, China’s response was inept, dishonest and utterly inconsiderate of the rest of the world. A competent, honest response would have placed the world on notice much earlier. A China that cared about the rest of the world would have halted flights abroad while this disease was spreading, instead of allowing its citizens to spread willy-nilly around the globe. (As Brian Kennedy writes: “China seems to have taken the position that if they were to suffer the coronavirus, so too was the United States and the rest of the world. What else is to explain the continuation of flights from China to the United States at the rate of some 20,000 passengers a day, until President Trump wisely shut them down?”)

This calls for a response.
The response needs to be harsh enough to teach the Chinese government a lesson, which means pretty harsh, as they appear to still think they can brazen this out. Among other things, the United States — and ideally the world community at large — need to sharply reduce economic relations with China. In particular, no one should be relying on them for medicines, medical equipment and other vital goods. (China’s state news service threatened to plunge America into a “mighty sea” of coronavirus by withholding critical medications.) Chinese scientists should no longer have easy access to Western laboratories or universities. Chinese political leaders should no longer find it easy to travel the world.

- April 07, 2020
Email ThisBlogThis!Share to TwitterShare to FacebookShare to Pinterest