you see these are the fuckers that hoard

this mom's toilet paper stockpile got ruined in the saddest way

In The KnowMarch 18, 2020, 6:47 PM EDT
This mom's toilet paper stockpile got ruined in the saddest way
In The Know 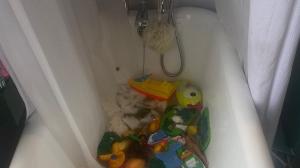 Scroll back up to restore default view.
A mom in the U.K. is going viral after a photo of her bathtub sparked a widespread debate online. Ed Cumming, a TV critic for the Independent newspaper, shared the now-famous image to his Twitter account, telling followers he’d received it from an unnamed friend. “My friend bought 18 loo rolls and her kids put them all in the bath”. Cumming’s image shows the woman’s bathtub filled with soggy toilet paper, plus plenty of water and children’s toys. it seems to imply that the children tossed all 18 rolls into the wet tub, ruining them completely. The situation drew plenty of reactions online, with commenters expressing both their amusement and disgust. “Serves her right for hoarding, doesn’t it?" “Karma is a savage,” another wrote. Others were quick to defend the mom, writing that 18 rolls wasn’t that much for an entire family. “You do realize it is quite normal for a family to buy a large pack of toilet rolls 12, 18 or 24. It may be all they had”. Meanwhile, some users chose to avoid the debate entirely, as they were too busy sharing their shock over the photo itself. “I literally GASPED when I saw that,” one wrote. “Kids gotta love them,” another commented