bullshit !!!!! of course its chinese


Listen if you don't know anything in this life....... you have to know the Chinese are full of shit they are the  fucking worst lying .....thieving .....ignorant....servile  nation of  people they have no regard  for  anyone or anything .....this virus is caused because of these  ignorant cunts .......their  total disrespect for all life on this planet has lead to this problem .....they are the lowest fuckers of the ring of  humanity......they  should be  sued by  every single person who has been  affected  .....that's everyone 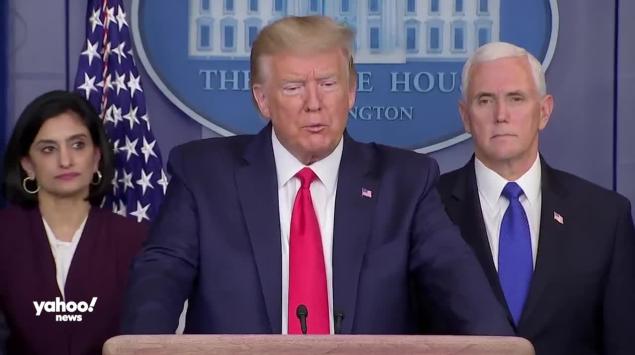 Scroll back up to restore default view.
President Trump has taken pains over the past week to link the coronavirus outbreak to China, calling it the “Chinese virus” at daily briefings over objections that doing so unfairly stigmatizes an entire nation and might encourage hostility toward Asian-Americans.
On Wednesday, Trump was asked whether this practice was “racist.”
He calls the virus that, he said, “because it comes from China. It’s not racist at all, no, not at all. It comes from China, that’s why. I want to be accurate,” Trump replied.
While the Trump administration has been criticized for its response to the pandemic, especially delays in making tests available for the virus, Trump was correct that the virus originated in China, and that the Chinese government bears some responsibility for its spread by hiding and then minimizing the outbreak.
Trump also correctly pointed out that a Chinese government official tried to blame the U.S. for the outbreak.
The virus appears to have originated at Huanan live-animal market in Wuhan. Of the first 41 people infected with the virus, 27 had gone to the market, which sells and kills animals, some of them wild, for consumption, Vox reported. In 2002, officials traced the outbreak of the SARS virus to a market in southern China that also sold live, wild animals for food.
China’s so-called “wet markets” arose in the 1970s, when famine killed millions there. In 1978, China’s Communist government allowed private farming, and a decade later it legalized the private industry of raising and selling wildlife.
The unsanitary conditions of these markets and storage of animals in crates on top of one another has been blamed for the transmission of viruses between species. In the initial stages of the SARS outbreak, Chinese officials withheld information on the number of people infected and later conceded it was “not well prepared” for the epidemic.
A timeline of the coronavirus outbreak shows that an all-too-similar pattern has reemerged.
Dec. 10, 2019: A 57-year-old seafood merchant at Huanan Market named Wei Guixian falls ill in what is believed to be the first case of COVID-19. Days later, he is hospitalized.
Dec. 30: After other food vendors at the market in Wuhan become sick with a mysterious pneumonia-like illness, Dr. Li Wenliang, an ophthalmologist at Wuhan Central Hospital, participates in a meeting on WeChat, a popular Chinese social media network, with seven other doctors. The topic of conversation is a growing number of cases in which patients undergo a rapid deterioration linked to respiratory failure. Wenliang warns that the illness resembles SARS, which went on to kill more than 800 people in 17 countries.
Dec. 31: The Chinese government publicly confirms that dozens of patients in Wuhan are being treated for a pneumonia-like condition.
Jan. 1, 2020: Wuhan police announce they have “taken legal measures” against Wenliang and the other doctors to silence them from spreading “rumors” about the virus.
Jan. 5: Health officials in China rule out the possibility that the virus is a recurrence of SARS.
Jan. 7: Chinese officials say they have identified the COVID-19 virus behind the growing number of infections.
Jan. 10: Chinese scientists post the sequenced DNA of the virus online.
Jan. 11: China announces first death due to COVID-19. The 61-year-old man had been a regular customer at Huanan Market.
Jan. 13: A case of the virus is reported in Thailand, the first outside of China.
Jan. 16: Japanese officials report their first case of COVID-19, a man who had visited Wuhan.
Jan. 19: China allows Wuhan to hold a Chinese Lunar New Year banquet, which is attended by tens of thousands of families in Wuhan.
Jan. 20: The U.S. reports its first case of COVID-19, a 35-year-old man in Snohomish County, Wash., who had traveled with his family to Wuhan.
Jan. 22: With 17 reported deaths and 550 infections in China due to the virus, the government officially locks down Wuhan. By this time, the city’s mayor admits, more than 5 million people have already left the region.
Feb. 6: Li Wenliang dies at a hospital in Wuhan.
Feb. 23: Chinese President Xi Jinping holds a teleconference with 170,000 officials and declares that his government has acted swiftly to stop the spread of the virus.
March 12: Chinese foreign ministry spokesman Zhao Lijian suggests that the virus was brought into China by members of the U.S. military. “Be transparent!” Zhao wrote on Twitter. “Make public your data! US owe us an explanation!”
March 17: China’s Ministry of Foreign Affairs announces that it is expelling American journalists working for the New York Times, the Wall Street Journal and the Washington Post after the Trump administration limited the number of Chinese journalists who can work in the U.S.
March 18: For the first time since the outbreak began, Wuhan province reported no new cases of COVID-19. The outbreak that began in Wuhan infected 81,154 people in China, killing 3,249 so far. Globally, the number of cases and deaths continues to rise, with 222,499 infected and more than 9,800 deaths.
March 18: Chinese officials issue an apology to Wenliang’s family and walk back criticism of the whistleblower. “Li Wenliang was a Communist Party member, not a so-called antiestablishment figure,” a party official said on state media.
_____

- March 20, 2020
Email ThisBlogThis!Share to TwitterShare to FacebookShare to Pinterest