The Harvey Wienstein scandal is only going to get worse ........and we all know the shit in Hollywood is  going to  implode or  explode ......or hit the  fan and  lots of c unts  are going to get covered in fecal matter......

Take Off Your Dress’: How Men In Hollywood, From Steven Seagal to Harvey Weinstein, Treated Women for Decades

John Walters,Newsweek Thu, Oct 12 4:20 PM EDT
Inside Edition correspondent Lisa Guerrero, who has worked as an actress since 1990, nodded knowingly when the Harvey Weinstein news broke late last week. “Nearly every woman I know in Hollywood has been ‘Weinsteined’ at some point in their careers,” says Guerrero. “If not by him, then by someone else.”
In 1996, Guerrero was a 31-year-old with a few minor roles to her credit (Matlock, Batman Returns ) when her manager, Lorraine Berglund, phoned with exciting news. “They want you to read for the female lead in a Steven Seagal film,” Berglund said, “but the audition is going to be held at his house in Beverly Hills.”
In the mid-’90s, Seagal was a box-office juggernaut, but Guerrero was wary of the offer. The casting agency offered to send a female associate, Shari Rhodes, to accompany Guerrero on the audition. “This was potentially a huge break for me,” Guerrero says, “but there was no way I was going there by myself.”
Trending: Queen Ants Dismember and Bury Corpses in Elaborate Death Rituals 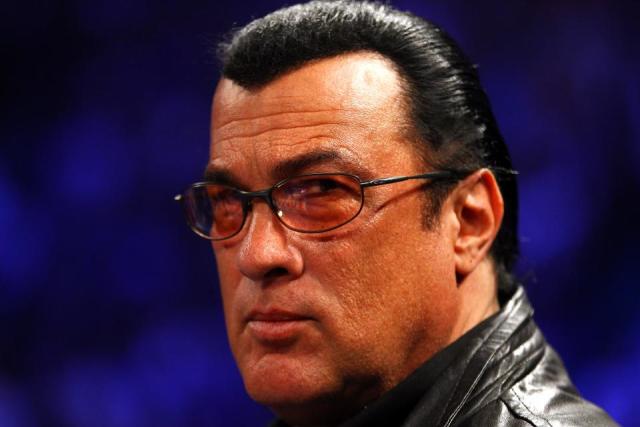 Lisa Guerrero of ‘Inside Edition’ tells Newsweek action star Steven Seagal propositioned her on the set of a movie in the ’90s. Getty Images
Upon arrival, Guerrero and Rhodes were greeted by Seagal, who answered the door clad only in a silk robe. He ushered them into a side room, where he sat in an oversized, ornate chair on a platform (“We called it ‘the throne,” says Guerrero) and asked Guerrero to read her scenes. When she finished, Seagal, who was also a producer on the film, Fire Down Below, said, “You’re fantastic! Tell me about yourself.”
“I drove home feeling pretty good about the audition,” Guerrero recalls, “and that same day my manager called. ‘Steven wants to offer you the lead,’ she said, ‘but you have to go back to his home for a private rehearsal tonight.’”
Don't miss: FEMA To Puerto Rico: Don't Listen to President Trump
Guerrero declined. The lead role of Sarah Kellogg in that film went to Marg Helgenberger (ofCSI fame), but Guerrero was given a small part. On the day she arrived on set, she spotted Seagal talking to male crew members. From Guerrero’s perspective, it seemed like a scene out of high school. “He was looking at me and then he’d say something to them and there’d be laughter,” says Guerrero, who was listed in the film’s credits as “Blonde Beauty.” “Finally he approached me and asked, ‘Would you like to go into my dressing room?’”
Once again, Guerrero declined. She has never seen Fire Down Below and as far as she knows, her scene was cut. “When I read about Harvey Weinstein, the reports of him appearing in a robe triggered me,” she says. “That’s exactly what Steven Seagal did. I found out later that he was notorious for this.”
An Inside Edition report that will air Thursday evening includes multiple allegations against Seagal spanning more than two decades. One of his accusers, Jenny McCarthy, said that during a casting session she was ushered into a room with Seagal, who said, “So you were [Playboy’s] Playmate of the Year? Take off your dress.”
Most popular: Ché Guevara Stamps Sell Out in Ireland, but Should War Leader Be Celebrated?
That’s Hollywood, says Guerrero. “As an aspiring actress you have zero leverage,” says Guerrero, who appeared in the 2011 Oscar-nominated film Moneyball. “Who was I going to go to complain about sex discrimination? He was both the star and a producer on the film.” 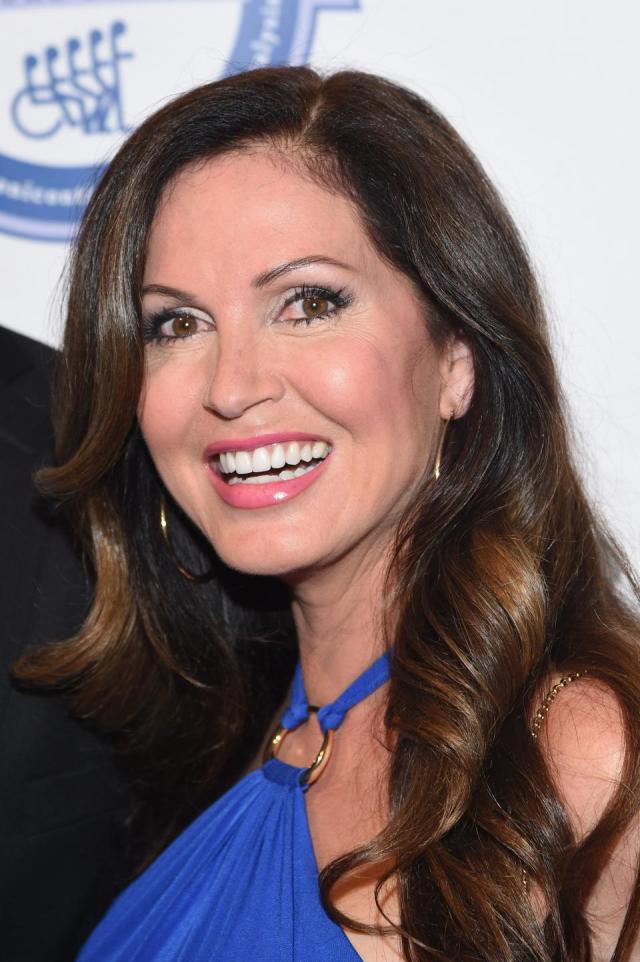 'Inside Edition' correspondent Lisa Guerrero tells Newsweek "nearly every woman I know in Hollywood has been ‘Weinsteined’ in their careers. Getty Images
Guerrero later ventured into sports reporting, but was unable to escape the casting-couch syndrome. As an on-air reporter at Fox Sports in the early 2000s, she says that she was twice propositioned by Fox executives and twice rejected them. There were consequences. “I was supposed to provide on-site coverage for the 2002 Super Bowl in New Orleans that aired on Fox,” Guerrero says. “Before we departed, an executive—he was married—suggested that we share a hotel room.”
No way, Guerrero told him. “Then they took me off our Super Bowl coverage,” says Guerrero, who left Fox Sports in 2003 to be the sideline reporter for ABC’s Monday Night Football.
Guerrero believes that the Weinstein scandal will lead to a tidal wave of similar stories. “The only way to get [this abuse] to stop is for every woman to come forward and to tell their stories,” she says. “It’s not just about going to Human Resources any more. If the most powerful studio mogul in Hollywood could be brought down, I hope more women find the courage to come forward.
More from Newsweek 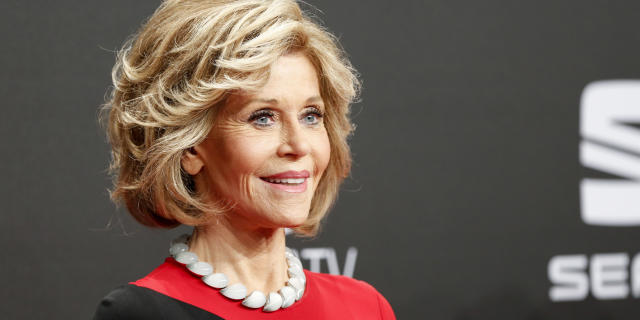 From ELLE UK
In an interview with CNN, actress Jane Fonda has admitted she learned of Harvey Weinstein's alleged sexual misconduct against women last year, and is 'ashamed' she didn't speak up sooner.
Speaking to journalist Christiane Amanpour, the 79-year-old admitted she felt it wasn't her 'place' to reveal the allegations at the time. 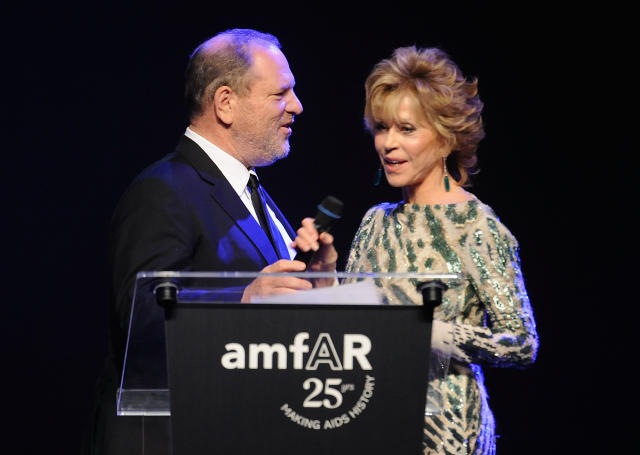 'I found out about Harvey a year ago and I'm ashamed I didn't say anything back then,' she revealed in an interview, scheduled to air Friday 13 October.
When asked by Amanpour why she decided not to speak out, despite the fact she's seen as such a 'bold' woman in Hollywood, the actress admitted: 'I was not that bold. I guess it hadn't happened to me and I didn't feel it was my place.'
Revealing she was informed of Weinstein's alleged sexual harassment by actress Rosanna Arquette - one of several women who has spoken out against the 65-year-old producer - Fonda added: 'It came as a shock and a great disappointment.'

When questioned whether she's experienced sexual harassment in the film industry, the star admitted: 'It has happened to me, it has. I only met Harvey when I was old, and Harvey goes for young because that's more vulnerable. But it's very, very common.'