when you leave america

Boy, 14, arrested in Saudi for 'improper public behaviour' by dancing to Macarena in street 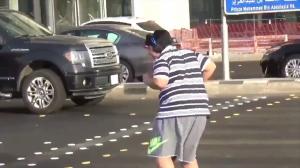 Scroll back up to restore default view.
A 14-year-old boy has been arrested in the Saudi city of Jeddah for dancing to the Macarena song in a street.
The boy was accused of "improper public behaviour" for enjoying the 1990s pop hit as he crossed a road.


Mecca  police said the unnamed boy also disrupted traffic. It was unclear if he was going to be formally charged.
In a 45-second video clip, shared widely on social media, the boy stops halfway across the road and starts the well-known dance routine.
The footage was first posted last year, but his arrest was reported on Monday.

Some said the boy was a "legend" and "hero", while others apparently agreed with the Saudi authorities, stating that he behaviour was "immoral".


Earlier this month, a singer was arrested in the religiously conservative Islamic kingdom for using the 'dab' move in an onstage dance.


Abdallah al-Shahani performed the dance at a music festival in the city of Taif in southwestern Saudi Arabia.
The dance had been banned in the Kingdom by the National Committee for Drug Control, on the grounds that it advocated or encouraged drug abuse, according to Saudi media.
A young woman was arrested last month after footage emerged of her wearing a miniskirt and crop top at an archaeological site.

The unnamed woman was detained by Saudi Arabia’s vice and virtue police on charges of wearing “indecent clothing”.


Dancing in the Street Can Get You Arrested in Saudi Arabia 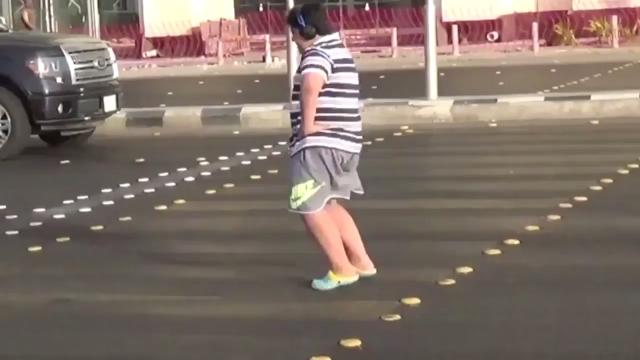 Saudi police have arrested a 14-year-old boy after he danced the Macarena in the middle of a busy road in the city of Jeddah in a clip that has been shared thousands of times on social media.
The teenager was being questioned after accusations of “improper public behavior” and disrupting traffic, a statement from Mecca police said, Reuters reported. The teenager’s name and nationality have not been disclosed.
A 45-second clip posted online shows the boy wearing headphones and walking into the middle of a five-lane road, where he begins to dance the Macarena, a routine popularized in the 1990s after a song of the same name by Spanish Latin pop duo Los del Rio.
Trending: Israel: Tel Aviv Bus Station Guards Detain All Arabs Who Don’t Have ID In Racial Profiling Strategy


Don't miss: Manchester United Target to Snub Jose Mourinho For Tottenham Hotspur Move
The boy, who is wearing a striped T-shirt, grey shorts and yellow and blue shoes, dances some of the signature moves in front of the traffic. The dance involves a series of moves and ends with a gyration of the hips.
Jeddah is a busy coastal city in the west of Saudi Arabia that acts as a point of entry for Muslim pilgrims undertaking the hajj in Mecca, which is around 60 miles to the east. The clip may have first been posted online in July 2016, the BBC reported.
Most popular: Kyrie Irving’s Last Cavaliers Tweet Is Pretty Awkward for All, Including NBA 2K18
The video has provoked mixed reactions online. Some said that the boy was just having fun and enjoying himself, while others accused him of a “discourteous act” and said he should have been in school, Arab News reported.
Saudi Arabia has strict morality codes that forbids behavior that is believed to endanger public decency. Earlier in August, a famous Saudi popstar was arrested for performing a dab—a dance move that involves the performer tucking their head into the crook of their arm—on stage at a music festival in the city of Taif. 'Dabbing' is considered to be a reference to drugs culture in Saudi Arabia.
Saudi authorities also arrested a woman who posted a video on Snapchat of herself wearing a miniskirt, cropped top and with her head mostly uncovered during a conservative region of the country.
More from Newsweek

Be honest. You have danced the Macarena at one point in your life. Whether it was at a school disco or a wedding, it's a staple choice for any slightly sozzled DJ. No gathering is a complete without a rendition of the now notorious Spanish dance, which almost everybody knows the moves to.  Chances are that you were pretty embarrassed when performing the dance, but fortunately no one tried to arrest you while doing it.  The same cannot be said about this unfortunate kid in Jeddah, Saudi Arabia. Take a look at the video below and see if you can see any crime being committed.  Jeddah boy dancing in the middle of Tahlia Street is the hero we need pic.twitter.com/fui9v2UuDF Nothing? He's just having ...


at August 23, 2017
Email ThisBlogThis!Share to TwitterShare to FacebookShare to Pinterest