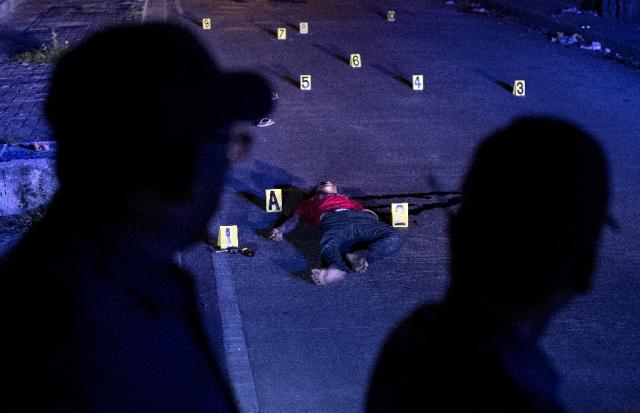 Manila (AFP) - It's just after midnight and Philippine President Rodrigo Duterte's "One Time Big Time" show is getting into full swing as police shoot dead another young "drug personality".
The corpse is hauled out of one of Manila's sprawling shantytowns, where so many people have been killed in Duterte's drug war, and taken to a funeral parlour where other bullet-riddled bodies are lying on bare tables or a bloodied concrete floor.
Each of the dead men has a number in Roman numerals drawn in black pen above their bare feet to help the morticians keep track of the bodies that churn through each night. One of them is marked VI.
The scene on Friday morning offered a haunting vision realised for Duterte, whose campaign stump speech last year included advice to voters to set up funeral parlours because they would be guaranteed money-spinners when he was president.
"The funeral parlours will be packed... I'll supply the dead bodies," Duterte said at one rally in the northern Philippines, which attracted typical cheers from Filipinos fed up with crime and attracted by his man-of-the-people charisma.
Duterte easily won the election largely because of his law-and-order platform, which included a vow to eradicate all drugs in society within six months by waging an unprecedented crackdown in which tens of thousands of people would die.
During the 14 months Duterte has been in power, police have indeed confirmed killing more than 3,500 people officially termed "drug personalities".
Unknown assailants have killed at least 2,000 others in drug-related crimes, according to police data, with rights groups attributing those and other unsolved murders to vigilante death squads or off-the-books police killings.
Until recently Duterte had been defiant in the face of criticism that, not only could his extraordinary campaign amount to a crime against humanity, it was bound to fail.
Duterte, 72, continues to insist his tactics are right -- while balancing comments such as he would be "happy to slaughter" three million drug addicts with indignant denials that he had ever incited police to act outside the law.
But over the past week Duterte has begun inserting into his near-daily speeches on the drug war that he is unlikely to achieve his goals by the time he has to stand down as president in 2022.
Duterte has partly blamed a corrupt police force for not being able to complete its mission.
- Fresh offensives -
By coincidence or not, police in Manila and surrounding provinces this week launched fresh offensives which led to some of the deadliest days of the drug war.
Continuing a theme of creating jargon that appears to trivialise the killings, police named their raids "One Time Big Time" campaigns.
The name echoed a defunct television show that had been popular with the tens of millions of poor Filipinos. It had a segment called "One Time Big Time" in which lucky contestants could win huge amounts of cash.
In the first major One Time Big Time operation this week, police in Bulacan province neighbouring Manila reported killing 32 people on Monday night.
While human rights activists and other critics voiced outrage, Duterte quickly praised the police involved and urged more of the same.
"If we could kill another 32 everyday, then maybe we can reduce what ails this country," Duterte said on Wednesday.
Police reported killing another 25 people that evening, then overnight Thursday and into the early hours of Friday an AFP team witnessed nine other bullet-riddled corpses in funeral parlours, inside slums or on nearby roads.
On one isolated road, a young man without shoes lay with bullet wounds to his head and stomach as a few policemen stood guard before crime scene investigators arrived. A pistol lay just near one of his hands.
One of the policemen said the dead man was a known drug trafficker and they were forced to shoot him in self defence.
Like in the vast majority of the "drug personality" killings, there were no reports of police being wounded or injured.
The investigators stayed for less than 30 minutes before the body was taken away and a police vehicle drove over the scene.
Even if the investigators did find the police account not to be true, Duterte has repeatedly promised to pardon officers if they a


at August 19, 2017
Email ThisBlogThis!Share to TwitterShare to FacebookShare to Pinterest