no end to dumb bastards 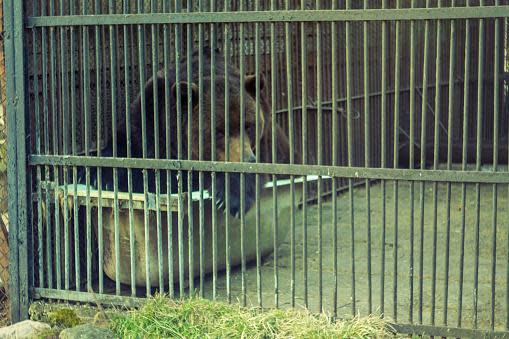 a shocking incident that was caught on CCTV, a bear violently attacked a man after he jumped into the animal’s enclosure in a drunken state to feed it milk.
In the incident that occurred Tuesday in Shelekhov district of Irkutsk region in Russia, Andrey Sakharovsky had his hand bitten off by a bear after he ignored the warning signs outside the enclosure containing three bears and climbed over the fence into it. The bears were placed in a caged enclosure in front of a café to entertain customers.
It was reported that Sakharovsky had consumed a lot of alcohol and wanted to give the bears, named Masha, a five-year-old female, and males Misha and Sasha, aged four years, something to drink and carried cans of condensed milk.
The video shows the man clambering into the cage and one of the bears — it is not known which — approaching the man as he falls into it. His friend initially watches from a safe distance and when there is commotion runs to help Sakharovsky. A third man, the café’s barbecue chef Gabil Guseinov was alerted by the man's screams and rushed to his rescue, using a spade to fight off the bears which had clawed Sakharovsky’s arm. The video then shifts to the moment when paramedics are seen carrying the man on a stretcher — clutching one arm to his chest. Guseinov also called the ambulance, the Serbian Times said.
Sakharovsky’s arm was severed close to the shoulder and he is receiving treatment for his injuries at a hospital, the report said.
“They will be prevented from any contact with humans or the owner will take the decision to put them down,” police spokesman German Struglin said regarding the bears.
"It was very, very scary, I would not wish it on anyone," Guseinov told the Serbian Times. The man's brother Evgeny Sakharovsky said: “Of course, it is his fault. He jumped over [the fence] and went to feed them."
“For drunken Russian men, the fence needs to be higher. Both my brother and the cafe are guilty. And it will be good if the cafe offer compensation because he is disabled now,” he added. He also said the family fears his brother may not be able to work again.
In a similar incident earlier this month, a man in Thailand was mauled by an Asian black bear after he teased and aggravated it. According to reports, the man was teasing the bear which was in an enclosure, by dangling a bowl of rice with a stick when the bear stood up on its legs and pulled him into the enclosure. The bear, in this case, had never attacked anyone before and was depressed when it was shifted from the monastery — where it had grown up — to a government wildlife center, after the attack. Referring to the incident, a representative for People for the Ethical Treatment of Animals told the Daily Mail: “If you taunt a hungry bear, you're likely to get hurt.”

at August 18, 2017
Email ThisBlogThis!Share to TwitterShare to FacebookShare to Pinterest