chinese peple may be the worst on the planet

Storyful Tue, Aug 15 11:23 PM PDT
Ecuadorian officials intercepted a Chinese fishing vessel that was carrying 300 tons of shark fins in the marine reserve surrounding the Galapagos Islands on Sunday, August 13.
The 20 crew members of the Fu Yuan Yu Leng 999 were arrested and the vessel impounded after officials found what they suspected were fins from endangered hammerhead and silky sharks. Ecuador’s El Comercio reported that the men face a three-year prison sentence if convicted of fishing in the UNESCO Natural Heritage Site.
The Ecuadorian government released video of officials tracking the ship using the automatic identification system (AIS) system, officials searching the vessel, and photographs of the navy intercepting the Fu Yuan Leng 999. Credit: Ecuadorian government via Storyful
International Business Times 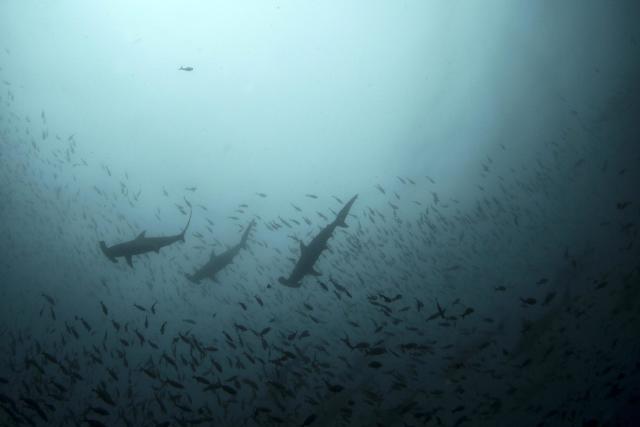 Thousands of sharks, including the endangered hammerhead, were found dead on a Chinese fishing boat in the Galapagos Islands Sunday, authorities in Ecuador said.
Twenty crew members of the vessel Fu Yuan Yu Leng 999 — carrying around 300 tonnes of fish — were taken into custody and charged with trafficking protected species.The accused could face up to three years in prison if found guilty.
The boat was apprehended within the Galápagos National Park —a marine sanctuary that falls under the UNESCO world heritage site of the Galápagos archipelago and where no fishing is allowed.
“There were thousands, if not tens of thousands, of sharks,” marine ecologist Pelayo Salinas, who was on board a patrol ship in the area, said, according to the National Geographic. “This is going to be historic. The biggest seizure of sharks in the history of the Galápagos, for sure.”
Ecuador's Minister of the Environment Tarsicio Granizo said Tuesday the crew was ordered to be held in custody by a judge on the island of San Cristobal, ahead of court proceedings.
"Not necessarily all of the catch came from the marine reserve, but the fact that it included young sharks, even baby sharks, indicates that they could have been caught inside the reserve," the minister said, according to reports.
The park said an investigation was underway to determine where the sharks were killed and where they were being taken.
Salinas said he suspected the boat to be a “mothership,” or reefer, which collects fish from smaller fishing boats and carries the material so that the smaller vessels stay out longer at sea.
“Sadly, this is day-to-day business on the ocean,” Salinas added. “There are thousands of these ships roaming the waters.”
While talking about a lack of resources in the Galapagos National Park to protect the ecosystem, Salinas said: "The bad guys are every day making more money. Patrolling is expensive, especially for a county that is in economic crisis."
This is not the first time such an incident has taken place. Another big seizure took place in 2015 when   Ecuadorian police seized about 200,000 shark fins that were set to be exported to Asia.
Shark fin is considered a delicacy in Chinese cuisine, which leads to illegal trafficking of the fish.
Salinas has started a crowdfunding page to raise money for two speed boats for the park that will help curb illegal trafficking of sharks. He plans to raise $200,000.
"Marine sanctuaries where fishing is totally banned and marine life can thrive, represent less than two percent of the global ocean. Yet every day, these rare protected places are threatened by industrial fishing fleets that enter these sanctuaries to fish illegally," the funding page reads. "The illegal trade of wildlife, including shark fins, represents a global lucrative industry and governments in lower-income and developing countries struggle to keep the bad guys at bay."
It adds: "The Galapagos Islands in Ecuador have the largest concentration of sharks on the planet. I know this first hand because I lead this study published in 2016. This makes them a global diving mecca, and shark alive in the Galapagos is worth much more to the tourism industry, that killed for its fins. This is why the Ecuadorian government decided to totally protect sharks from fishing in 1998 in the Galapagos Marine Reserve, and establish the Darwin and Wolf Marine Sanctuary to protect hammerhead and other sharks in 2016. However, these huge shark concentrations are also a target for pirate fishing fleets that seek one-off economic gain by killing an estimated 100 million sharks a year globally."
Related Articles


- August 17, 2017
Email ThisBlogThis!Share to TwitterShare to FacebookShare to Pinterest