'The Bachelorette: The Men Tell All' Recap: Keeping it 100

We feel you, Josiah.
“Look, I have no problem being opinionated,” says Iggy. “My responsibility at the time was to be honest with this woman that I was really, really attracted to… I would do it again.” I wonder if he would say the same thing about choosing to wear that Mr. T chain to the taping. 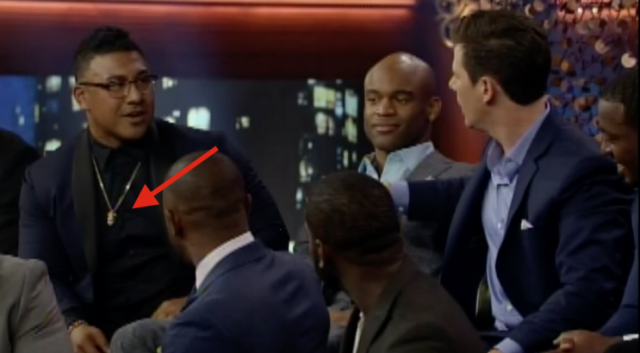 If you went to refill your wine glass during Iggy’s brief moment in the spotlight, hustle on back to the couch now, because it’s time for Kenny vs. Lee. Or more accurately, it’s time for the other guys to talk s**t about Lee and his less-than-inclusive attitudes. “Kenny might have been the most well-liked guy in the house, and it’s hard to say the same about Lee,” says Dean, who was apparently nominated by Team Bachelorette to be their Spokesperson Against Racism. “And when you have literally 30 people on your side versus one person, it’s clear who the person in the right is and who is wrong.”
While Adam jumps in to say that Lee’s claim that Kenny tried to pull him out of a van in Hilton Head was simply “not true,” DeMario comes to the tiny white Southerner’s defense: “When all my s**t was going on, Lee reached out to me first,” he says. “The Lee I know was a very genuine guy.” Will agrees, saying that he had a decent relationship with Lee for most of the show, and that he was surprised and “disappointed” to learn about Lee’s racist tweets. Even Kenny notes that his conflict with Lee “didn’t feel like racism… It really just felt like, this dude’s out of his league.”
This goes on and on, with the Kenny asserting that he did his best to take the high road so as not to disgrace himself in the eyes of his daughter, McKenzie, and the guys insisting that they never once witnessed Kenny being “aggressive.” Lee, meanwhile, hasn’t said anything — and when he finally does start talking, it’s clear he’s in Redemption Tour mode. First, Lee admits that Kenny didn’t actually try to pull him out of a van (“Yeah, no s**t,” notes Kenny drily), and then he apologizes for not being a “better friend.” 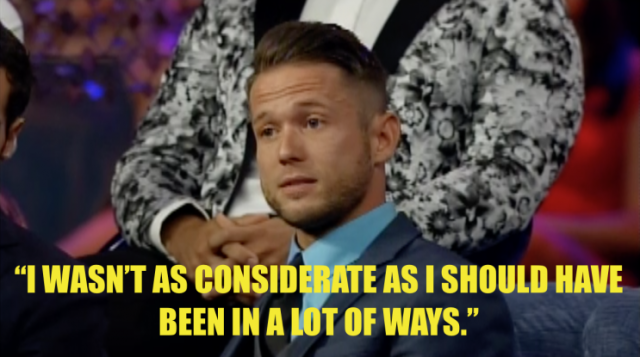 Okay thanks, Captain Understatement. And then, in an effort to wash away all the bitterness of the Lee-Kenny feud, Harrison surprises Kenny with the news that McKenzie is actually backstage. And you guys, she’s carrying a rose for her Dad. 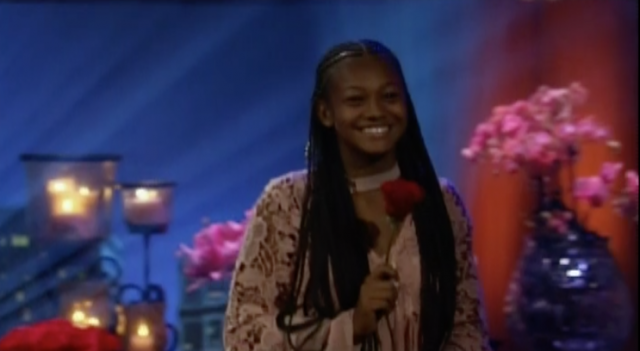 Dammit, I hate when this stupid show makes me cry! “I’m proud of you,” McKenzie tells her Dad. “You were, like, number eight.” And her little face, when Chris Harrison announces that the show is sending them to Disneyland to celebrate Kenny’s birthday?

“I should have been a better friend,” Lee repeats, after noting that sometimes his “facetious” sense of humor does not come across well. Yeah, the guys aren’t buying it. “While the episodes were airing, you did not take to social media once to denounce anything that you were saying or doing,” snaps Dean. “In fact, you were promoting your actions every single time on Instagram… Now that you’re in the hot seat, now that 18 people are calling you on your s**t, this is the moment when you’re saying sorry.” Dean’s got an excellent point, but I almost missed it because I was so busy puzzling over his bizarre hair. 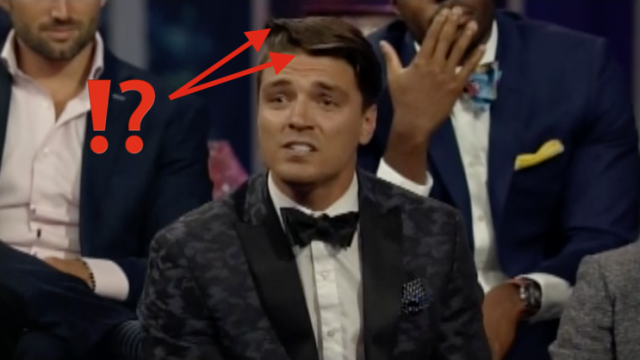 Anyhow, all the guys want Lee to truly apologize — not just for “ruffling feathers” in the house, but also for things like this: 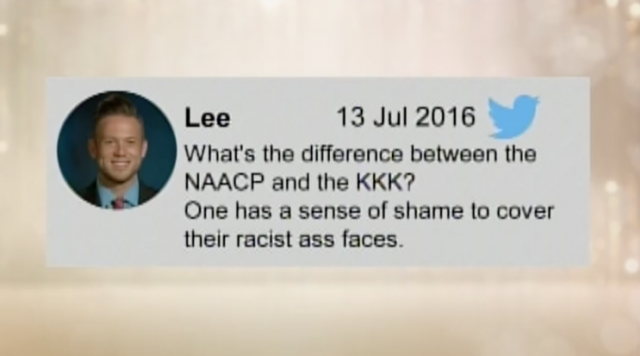 “For me to read that out loud makes me feel unbelievable uncomfortable,” says Harrison. “When you see it now… how do you feel about it?” Oh, you know, Lee feels like he has “a lot to learn” in “that area” (meaning, what, common human decency?) and that his statements were “inconsiderate.” But once again, the Men Tell All’s titular men are not having it. “Everybody’s sorry when they get caught,” says Kenny. Josiah takes it a step further, walking on to the stage and sitting down next to Lee on the couch. If Lee really believes the NAACP is like the KKK — “people who hung my ancestors,” notes Josiah — why did he come on a show with a black Bachelorette?
“I don’t like racism at all,” counters Lee. “And when I woke up and I saw that those [tweets] came out, it hurt me a lot, and I started thinking about how reckless…”
At this point, Lee is shouted down by the other bachelors, who know they didn’t just hear Lee say those racist tweets hurt him. “When you woke up the next day and you realized that you sent those racist-ass tweets, the next day did you go, ‘I, Lee, denounce these tweets’?” asks DeMario. “Or did you wait a year and nine days to be on this stage right now, and now are you saying it?”
Clearly the answers to those questions are “No” and “yes,” but instead Lee mumbles something about not intending “for it to come out the way that it did. It cut it in half when it released it onto Twitter from my Facebook.” Okay, so the message was truncated — so whatdid Lee intend for it to mean, in its full and glorious context? 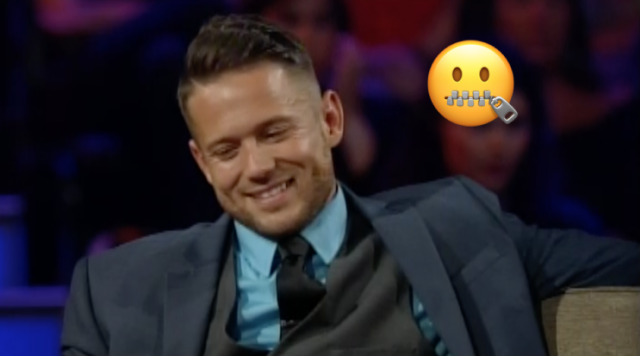 Yeah, Lee’s got nothin’ — unless, for some reason, Team Bachelorette edited his answer out. He will say he denounces those tweets, and reiterates that the KKK tweet was only part of his full post on FB. (But what did the rest of that post say? He doesn’t explain, and as far as I can tell his personal profile page is private.) So Anthony tries the direct approach to get Lee to say something — anything — reflective about his past behavior: “Are your actions motivated by racist thoughts that are implicitly embedded in your mentality?”
Short answer: Maybe? “I was lacking, and I did things that were wrong,” says Lee. “I am grateful that I have people in my life now that make me not like I was when I made a racist comment. I completely denounce that, and I denounce that Lee. And… I want to learn.” Lee adds that he’s sorry for being “ignorant in those subjects” — and the guys finally decide to accept his apology. 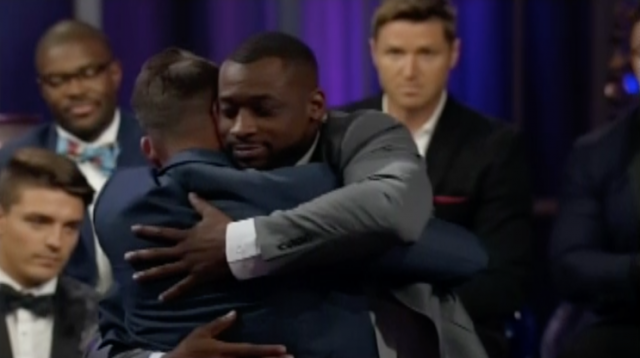 Okay, great. Let us never speak of this drama again. We have more pressing matters to cover: Like Dean’s heartbreak. (And his camo tux.) ((And his hair.)) I know, I know, I should leave the poor guy alone — especially when he’s talking so thoughtfully about his very emotional hometown visit. “That was the realest, most raw moment that I had throughout the entire experience,” says Dean. “Had I not gone there with Rachel, I don’t think that I ever would have addressed the feelings that I had suppressed for so long.” Harrison doesn’t dwell too long on the catharsis, though, because he wants to make sure everyone knows Dean will be in Paradise with these bozos come August 14:
Hey, look who’s here — the Queen herself! 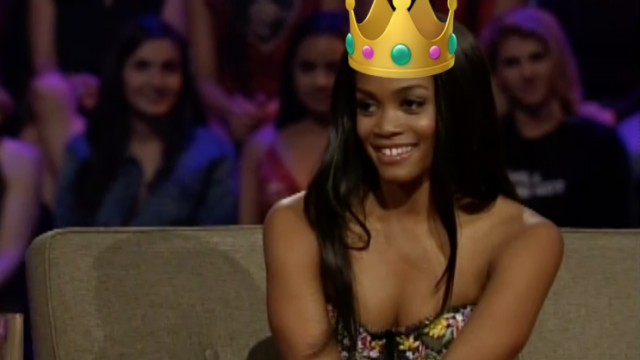 Rachel’s barely up there a minute though before Dean joins her to learn more about why she sent him packing in Dallas. “I am just still kind of confused about why you told me you were falling in love with me, and then I got the boot, like, four days later.” Of course, as Rachel tries to explain herself, all I could do was study Dean’s entire lewk. 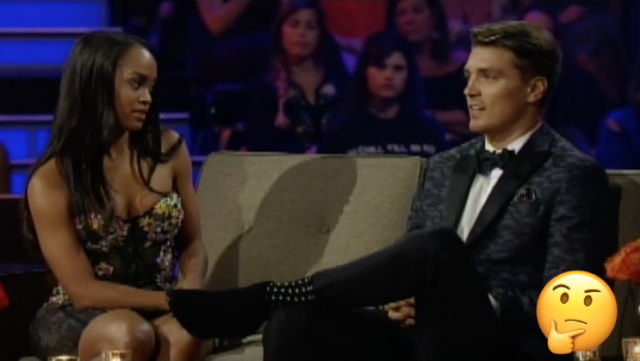 Though Rachel insists she meant it when she said she was falling in love with him too, Dean wonders now if she just said it because she felt bad for him after the disastrous family visit. “I’m sorry that’s how you feel,” she responds. “But if you know me, I never say anything just to say something — at all.”
They hug it out, and Harrison pivots to DeMario. “Who?” asks Rachel jokingly.

Rachel dismisses her former suitor with a shrug. “For me, the dishonesty was like, ‘All right, you gotta go.’” Roger that! 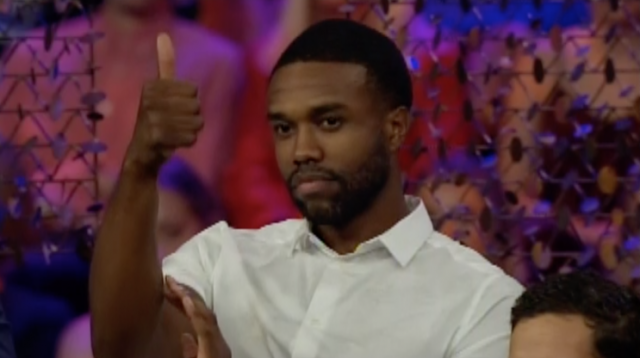 As for The Kenny and Lee Situation, Rachel tells Kenny she was “disappointed” in how he handled it — because he’s clearly the bigger man (literally and figuratively). “Lee was Lee,” she says. “I wish you could have just realized that was background noise.”
As for Lee? Well, sir, don’t come for our Bachelorette (or her men) unless she sends for you. “I’d be more than happy to give you a black history lesson,” says Rachel. “A lesson on women’s rights — you know what I’m saying?”

God willing, this will be the last we hear from this dude.
Harrison wraps things up by letting some of the other guys ask whatever burning questions they have for Rachel — but mostly they all just want to say how great she is and how they understand why she made the choices she did. All of them, that is, except for Fred. He’s pretty annoyed that Rachel didn’t give him a chance. “I thought that because I knew you, that I could bring a level of comfort to you,” he says. “But the reaction that you gave me was one that I least expected.” Still, he’s “so happy” to see her happy, so yay?
Let’s give Kenny the last word. 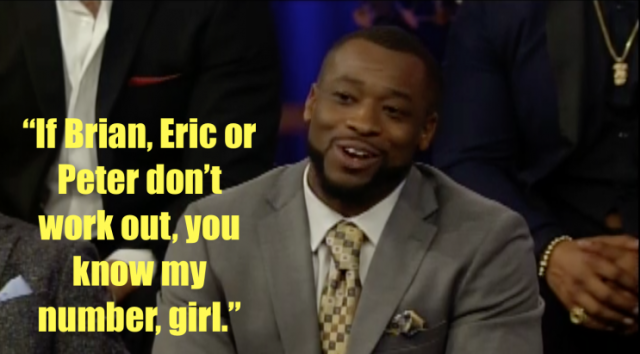 Damn right. Now, on to the bloopers!

The best of the bloopers involve food: Josiah stuffing his face with oysters and Norwegian hors d’oeuvres, Rachel munching chips while preparing to send Josiah home, and Dean’s disgusting gum storage. (“How is that gross? It’s my ear.” Blech.)
Speaking of gross, Team Bachelorette made sure to zoom in on DeMario just as Harrison faked out the crowd by announcing a “sneak peek of the exciting and already controversial new season of Bachelor in Paradise.”

You can exhale, pal — the promo won’t air until next week.
Welp, rose lovers, we’ve almost made it to the end — and I want to know what you thought about tonight’s Men Tell All. Did Lee redeem himself at all? Should Dean skip Paradise and head right to the Bachelor mansion? And am I paranoid to think that Mike Fleiss is already grooming McKenzie to be the Bachelorette in about 15 years? Post your thoughts now! And stay tuned for Chris Harrison’s behind-the-scenes blog, coming Tuesday. Now if you’ll excuse me, I’m going to go watch that Dave Chappelle routine about OJ.
The Bachelorette airs Mondays at 8 p.m

- August 01, 2017
Email ThisBlogThis!Share to TwitterShare to FacebookShare to Pinterest