Here's a tuna fish sliced in half yet still flailing, refusing to die 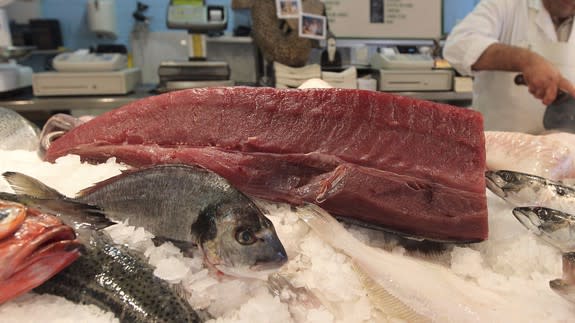 Warning: This post can be unsettling for some readers.
This fish is clearly refusing to die.
In a clip that has since gone viral, a yellowfin tuna, cut in half, is shown still thrashing around on the plastic tray it's displayed in:
The clip, posted by Yutaka Suzuki, shows the fish floundering in the tray for more than a minute and a half. While the fish wasn't identified, a woman's voice in the video says that it'sburi, Japanese for yellowtail tuna, according to SoraNews24.
Some twitter users pointed out that the fish's nerves weren't properly severed, which would've rendered them inactive.
Muscle motor neurons are triggered by electrical signals, and can still be active after the brain dies.
Japanese fishermen typically insert a spike directly into a fish's hindbrain in a method calledikejime, which causes immediate brain death, stopping involuntary muscle reflexes. Whenikejime is done properly, the fish fins flare and the fish will relax.
Proponents say that not doing so could affect the taste of the fish, as the fish's muscles produce lactic acid as they thrash about.
- July 08, 2017
Email ThisBlogThis!Share to TwitterShare to FacebookShare to Pinterest
Newer Post Older Post Home