the clinto family has no  fucking morals  not too mention the cunt friends  who have  died  knowing them ....... 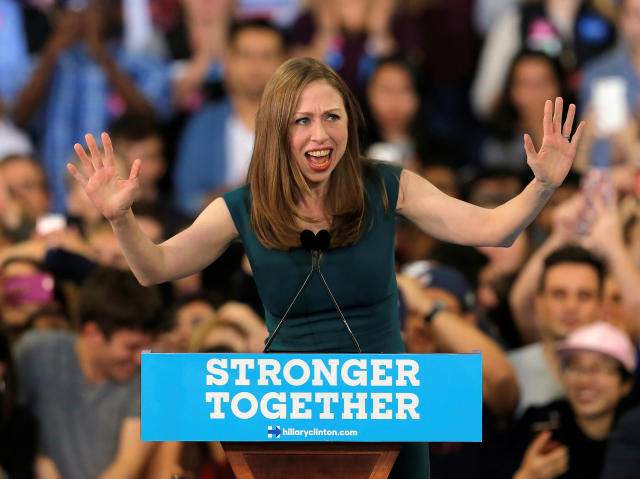 The daughter of Donald Trump's rival in the 2016 general election wants the president to read classical Greek stories that have been told to children for generations to teach them about morality and empathy. Chelsea Clinton tweeted a message to her 1.73 million followers Sunday morning that read: "Does anyone else think President Trump might benefit from reading Aesop's Fables? The Cat, The Rooster & The Mouse? The Eagle and The Arrow?"
It's unclear what prompted Clinton, the only child of former President Bill Clinton and former Secretary of State Hillary Clinton, to write the message. Chelsea Clinton is often critical of the Trump administration, however, and served as a surrogate for her mother during the 2016 presidential race. She previously mentioned Trump on her Twitter feed on Friday, tweeting, "Oh. Of course," while quoting from a tweet written by NBC News editor Bradd Jaffy that read, "The Trump-Putin meeting is taking place at the same time the other world leaders are discussing climate change."
Aesop's fables are stories that have been translated from sixth century B.C. They are said to have been created by a deformed slave known as Aesop who lived on the Greek island of Samos. The short stories were cited by Plato and Aristotle and generally express a moral message.
Trending: How to Make Alcohol From Potatoes? Eva Ekeblad, Google Doodle Scientist, Knows What to Do


The story of The Cat, the Rooster and the Young Mouse recounts the story of a very young mouse leaving his hole and entering the world for the first time. When he returns home, he calls a cat a beautiful animal and a bird a "terrible looking monster." The mouse's mother explains why it is wrong to make judgements based on appearances. She tells her offspring: "My dear, that horrible creature was a harmless bird, but that beautiful animal with the fluffy fur was a mouse-eating cat. You are lucky she did not have you for dinner."
The story of The Eagle and the Arrow is about an eagle that is killed by an archer as he watches a hare, preparing to claim it as its prey. The arrow used is made from feathers from the eagle. As the eagle dies, he tells himself, depending on the translation: "We often give our enemies the means for our own destruction."
More from Newsweek