he knew he was doing wrong

Ohio father of 4 bids farewell before deportation to Mexico

MICHAEL EDISON HAYDEN,ABC News 14 hours ago
An Ohio father of four had an emotional farewell with his family this morning before returning to Mexico.
Jesus Lara Lopez, who worked at a packaging facility in Willard, Ohio, was seen off by family and about a dozen supporters at Cleveland Hopkins International Airport this morning, according to The Cleveland Plain Dealer.
Photographs taken at the airport before his flight show him embracing his children in a series of tearful goodbyes. 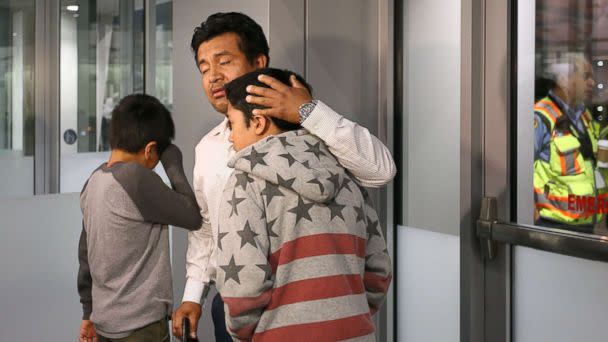 When Lopez checked in with immigration officials in March, he was told he was being deported under "an illegal immigration crackdown," his lawyer David Leopold told the press this morning.
Lopez has been in the country for 16 years, and his children were born in the U.S., the Plain Dealer reported.
A federal immigration judge first ordered Lopez removed in 2011, Khaalid Walls, the Northeast communications director for Immigration and Customs Enforcement, told ABC News.
In 2014 the agency granted Lopez a stay of removal, Walls said, adding that "in a further exercise of discretion, the agency has allowed him to remain free from custody to finalize his departure plans."
"The agency will continue to closely monitor his case to ensure compliance," Walls said.
He said that ICE could not confirm for ABC News whether Lopez complied with its request until after he is "successfully repatriated," for operational and security reasons, but would try to provide an update on his status later today.
Trump's 'deportation force' begins to take shape
Dad fighting deportation has lived in a church for 6 months to keep his family together
ABC affiliate WEWS-TV in Cleveland reported that Lopez had never been charged with acrime during his 16 years in the U.S., has paid taxes and did not receive food stamps.
Walls noted in response that the lack of a criminal record does not necessarily exempt an unauthorized immigrant from deportation.
"As Secretary [John] Kelly and Acting Director [Thomas D.] Homan have stated repeatedly, ICE prioritizes the arrest and removal of national security and public safety threats; however, no class or category of alien in the United States is exempt from arrest or removal," Walls told ABC News.
Leopold told WEWS-TV that his client had a valid work permit. The New York Times reported in June that Lopez worked "the graveyard shift packing Milano cookies and Goldfish crackers" at Pepperidge Farm.
ABC News reached out to Pepperidge Farm for a comment about Lopez's work permit, and the company said he was hired by a third-party company, Spherion, which manages packaging workers at the facility. Spherion confirmed for ABC News that Lopez had a valid work permit and it hired him in October 2016.
"These are the darkest times I've ever seen as an attorney. When the best and the brightest that we have to offer are taken from their homes and sent away," Leopold told reporters. "The law is so broken."
America's Voice, an immigration rights advocacy group, posted a statement on its website criticizing the deportation of Lopez from John Sandweg, a former acting director of ICE and a former acting general counsel of the Department of Homeland Security.
"Cases like this are an incredible waste of ICE resources that only make it harder for the agency to identify and remove dangerous criminals," he wrote. He added that he believes enforcement resources should be focused on finding criminals and public safety threats instead.
Sandweg has been a vocal critic of President Trump's broad promise of reducing illegal immigration to the U.S. a central part of his 2016 campaign.
The U.S. was already focused on enforcing immigration rules during the presidency of Barack Obama, who oversaw the removal of more than 2.5 million people through immigration orders, earning him the nickname deporter in chief.
"The [Trump] administration's focus on the low-hanging fruit of the enforcement system only allows the bad guys to remain at large, w