why are people   being so insecure

Trump: 'I just don't want a poor person' dealing with economic issues in my administration 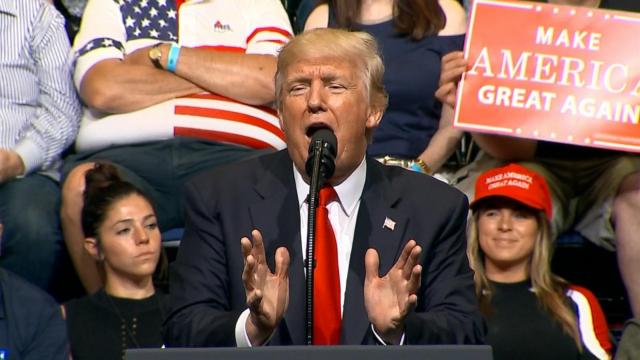 Scroll back up to restore default view.
President Donald Trump on Wednesday night held a campaign-style rally in Iowa, where he congratulated the Republican winners of Tuesday's special elections in South Carolina and Georgia. Also, he sent his well wishes to Rep. Steve Scalise, who was injured in last week's shooting in Alexandria, Virginia.
In a noteworthy policy-related portion of his comments, Trump announced his intention to pursue legislation that would bar immigrants from being eligible for welfare for at least five years after arriving in the U.S.
But federal law already bars most foreigners with immigrant visas from being eligible for federal benefits for their first five years in the country.
It's unclear how Trump's desired legislation would differ from the status quo.
Trump said "the time has come" for "new immigration rules" that would require those seeking admission to the country to be able to support themselves financially. He said he will be "putting in legislation to that effect very shortly."
And he brought up his plans for a wall along the U.S.-Mexico border.
"We are thinking about building a wall as a solar wall," he said. "So it creates energy. And pays for itself. And this way, Mexico will have to pay much less money. And that's good, right? Is that good? You are the first group I've told that to. It makes sense. Let's see. We are working it out. Solar wall panels. Think of it, the higher it goes, the more valuable it is. Pretty good imagination, right? My idea. We have a good shot. That's one of the places where solar really does work. At the tremendous sun and heat. We will see what happens."
The president also commented on Secretary of Commerce Wilbur Ross' presence at the rally, noting that he wants rich people, not "poor" people, in positions of power on economic issues in his administration. In January, Forbes reported that Ross, an asset investor, is worth $2.5 billion.
"These are people that are great, brilliant business minds," Trump said. "That's what we need. That's what we have to have, so the world doesn't take advantage ... We can't have the world taking advantage of us anymore. And I love all people — rich or poor — but in those particular positions, I just don't want a poor person. Does that make sense? ... If you insist, I'll do it, but I like it better this way."
He kicked off the rally, at the U.S. Cellular Center in Cedar Rapids, saying, "It is great to be back in the incredible, beautiful state of Iowa. It's always terrific to be able to leave that Washington swamp and spend time with the truly hard working people we call American patriots, truly amazing people."
"I also want to extend our congratulations to Karen Handel of Georgia, and we can't forget Ralph Norman in South Carolina," Trump said, referring to the winners of two special elections on Tuesday. "He called me, and I called him. He said, 'You know what? I felt like the forgotten man.' But he won beautifully. A lot of people didn't show up because they thought he would win ... Karen is going to be really incredible."
Trump added that Handel will target "tax cuts, reducing crime, securing that Second Amendment, and that looks like it's in great shape with Judge [Neil] Gorsuch," Trump's appointee to the Supreme Court.
According to the Georgia secretary of state, Handel beat Democrat Jon Ossoff, 52.13 percent to 47.87 percent. In South Carolina's 5th Congressional District, Norman got 51 percent of the vote, defeating Democrat Archie Parnell, who had roughly 48 percent.
At the rally, Trump said of Scalise, "I would like to take this moment to send out thoughts to our courageous friend Steve Scalise and everyone recovering from the assault."
He continued, "So to Steve, we say ... we're praying for you, we're pulling for you. You have our full support ... and our gratitude tonight goes out as well to the Capitol Police.
Trump called for unity, and he reminded supporters to be wary of the mainstream media, which his administration "will never be intimidated by," in its efforts to "make America great again."
After a number of criticisms of the press, he reminded the crowd of his administration's many accomplishments, saying of prior administrations, "Very few have done what we've done."
He noted the 38 bills that have been enacted since he took office, later changing the number to 39, and said that while "some of them are really big," the most significant ones, such as on health care reform and the "largest tax cut in the history of the United States of America," are yet to come.
He said his agenda has been limited by obstructionist Democrats in Congress, who have been "unbelievably nasty." While criticizing the opposing party, he called for more bipartisanship but admitted that his negative remarks about the party were likely "making it a little bit hard to get their support." He quickly added, "But who cares?"
The successes Trump highlighted at the rally included toughening law enforcement, stepping out of the Paris Climate Agreement, appointing Gorsuch and working alongside China.
In closing, he again criticized the media and emphasized how significant his accomplishments have been, given the "phony witch hunts" conducted against him.
He repeated his call for increased bipartisanship in Congress, saying, "It would be great if the Republicans and the Democrats could come together," adding that Democrats "need to be positive" and "can't continue to be obstructionist."
Trump touted his accomplishments in Saudi Arabia, then thanked the citizens of Iowa for their continued support and exited the arena.

Before the rally, Trump visited Kirkwood Community College to get briefed on agricultural technology being developed there. Among the machines he saw was a combine simulator, a virtual way to practice using a combine. Afterward, he told reporters that he "just learned more about farming than I ever thought I'd learn."
ABC News' Jordyn Phelps contributed to this rep