We would love to try for another one': Ellen show DJ Stephen 'tWitch' Boss, 40, publicly spoke about having another child with wife Allison just one month ago - only to kill himself in an LA motel bathroom three days after their wedding anniversary

Ellen show DJ 'tWitch' said he was hoping to have another child with his wife the month before he shot himself dead in a motel bathroom.

He had celebrated his wedding anniversary with wife Allison Holker, 34, three days before.

In an interview last month, the dancer told the Jennifer Hudson Show that he and his wife were considering adding to their family – saying: ‘I love the little babies, I love them. It's a constant conversation.’

Allison excitedly told Hudson: 'I think we would love to start trying for another one.'

On Wednesday, she paid tribute to him in a heartfelt statement - saying she would 'save the last dance' for him - before welcoming tearful family members to their home in Enrico, California, on Wednesday. 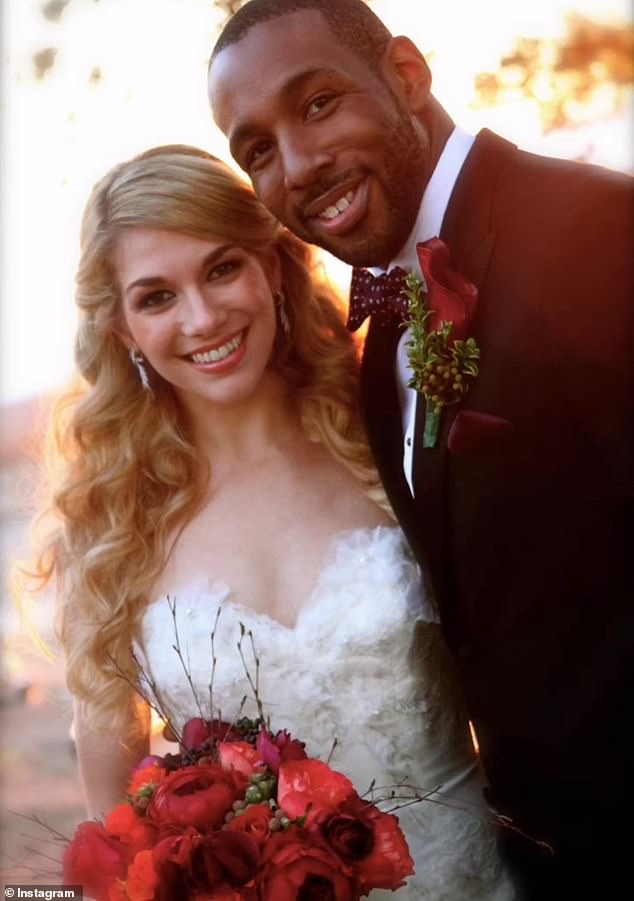 Boss and his wife had been planning to have a fourth child, discussing their future on the Jennifer Hudson Show in November. The couple celebrated their ninth wedding anniversary just three days before the tragedy 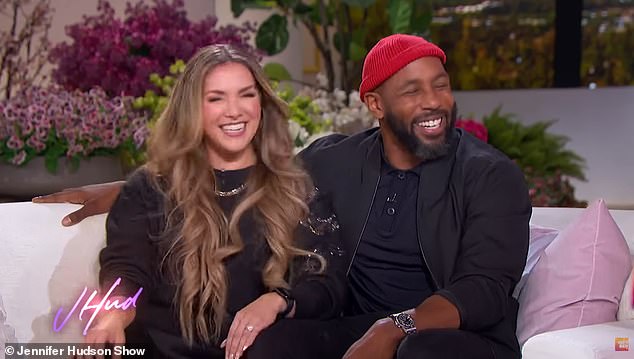 The couple discussed having another child, and seemed to be planning for their future

The So You Think You Can Dance star, who met his dance teacher wife Allison on the show in 2010, was father to three children, Zaia, 3, Maddox Laurel, 6, and Weslie Renae, 14, who was born in Alison’s previous relationship but adopted by Stephen.

The couple appeared to be happy and planning for the future when they were interviewed on the Jennifer Hudson Show in November.

They celebrated their ninth wedding anniversary on December 10, posting a heartfelt video of them dancing in front of a Christmas tree to mark the occasion.

The suicide has cast a dark cloud over the bright future of daughter Weslie, who is set to study at Notre Dame University with the class of 2026, according to a sign on the family’s front lawn.

She also plays for her school’s soccer team, models sportswear and is a young influencer for brands including Dick’s Sporting Goods, managed by her parents. 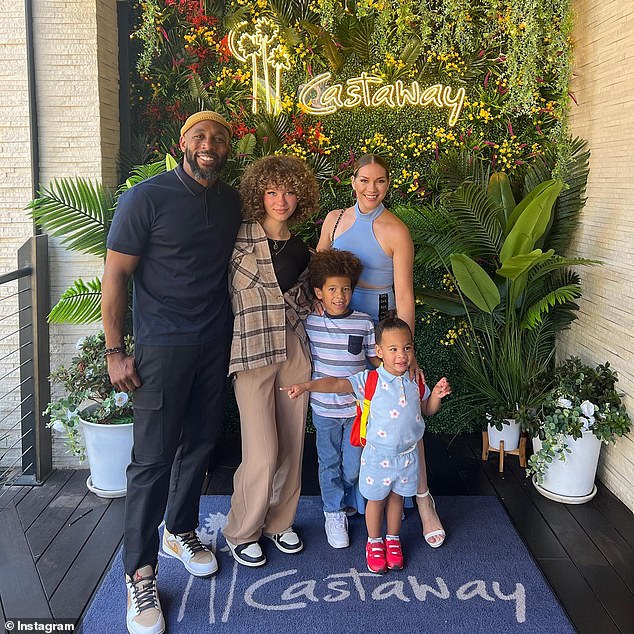 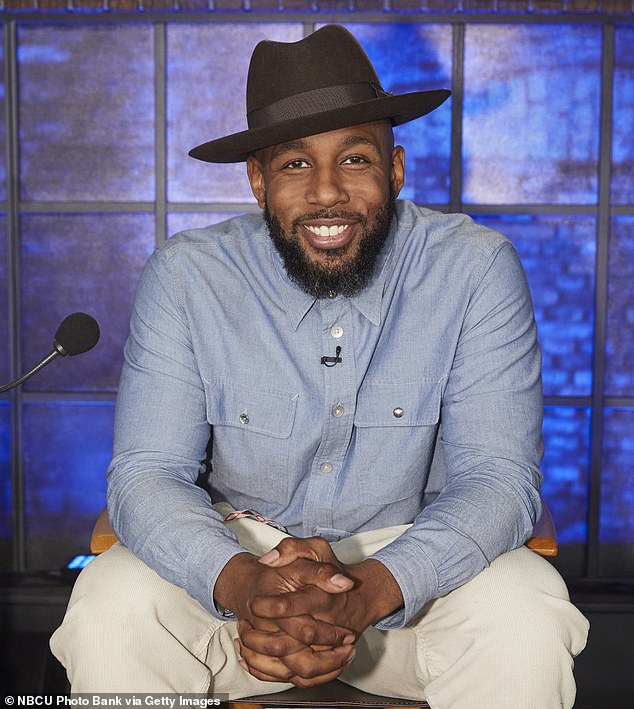 Ellen DeGeneres has paid tribute to him as her 'family' and  'pure love and light' - adding that she was heartbroken.

The star said: 'I will miss him. Please send your love and support to Allison and his beautiful children - Weslie, Maddox, and Zaia.'

Motel staff told DailyMail.com that a maid discovered the DJ's body while performing a welfare check after he failed to check out on time.

They said he used his own name to check into the motel Monday and was not discovered until Tuesday morning.

Workers said he 'shot himself in the head' but no one heard the gunshot, describing the scene as 'pretty bad'.

He left home on Monday without his car and when he didn't return by Tuesday - disappearing overnight - his wife frantically filed a report. 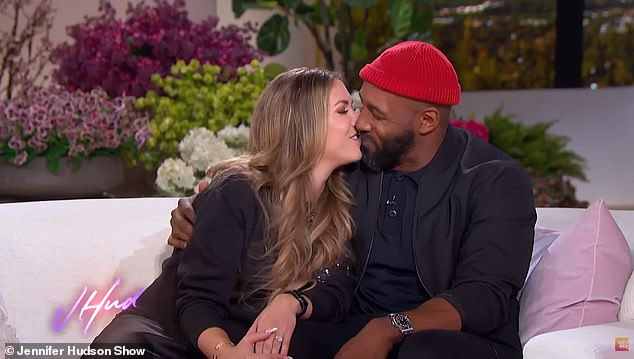 In an interview last month the dancer told the Jennifer Hudson Show that he and his wife were considering adding to their family: ‘I love the little babies, I love them,' he said 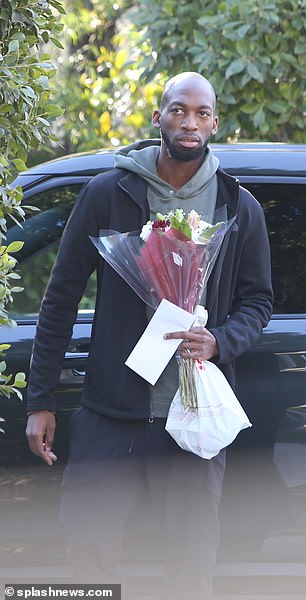 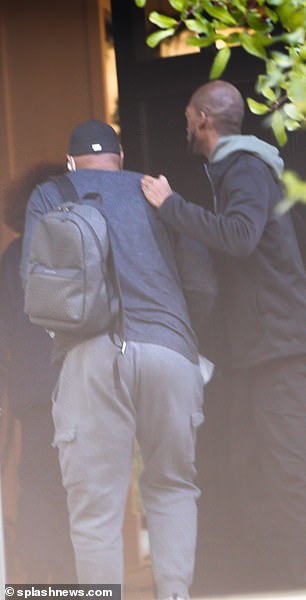 Family members consoled each other as they arrived at the luxury property, which is just a 15- minute walk from where Boss shot himself

The manager of the Oak Tree Inn, who only wanted to be identified by his first name, Rakesh, said: 'He went into his room, and he never came out. At 11.15am on Tuesday the maid opened the door to check on the room.

'There was his stuff in there but no one there. She checked the bathroom, and there was blood everywhere.

'She was very scared. This is the first time anything like that has happened here. We called 911, they told us to check his pulse but there was nothing.

'The paramedics and the police came, and they said he was dead. Maybe he did it during the day on Monday. It's a busy, loud road outside here, it's possible nobody heard it because of that.'

Boss called ahead at around 9.20am on Monday to check if rooms were available, then walked the few blocks from his home - and appeared 'completely normal' and 'calm'.

Boss and Allison, a professional dancer, married in 2013, hosting 'Disney's Fairy Tale Weddings' together on Disney +. 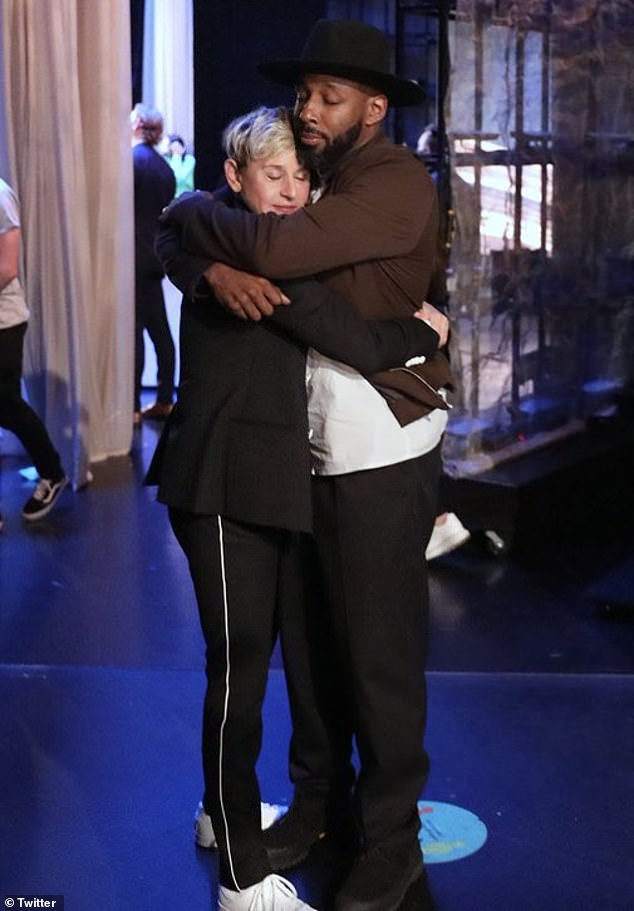 Ellen posted a heartfelt tribute to the DJ, calling him 'family' and saying she was 'heartbroken' 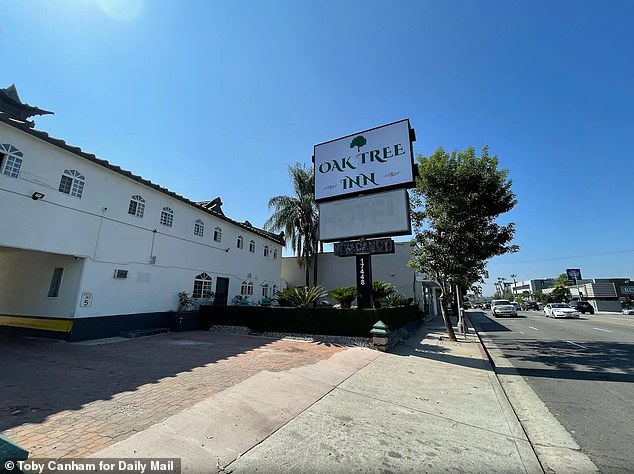 Boss shot himself in the head, according to workers at the Oak Tree Inn, pictured 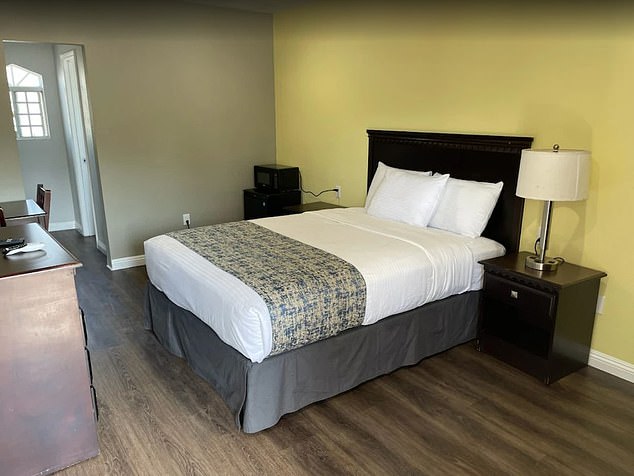 Workers told DailyMail.com that a maid discovered his body after performing a welfare check when he failed to leave the room on time 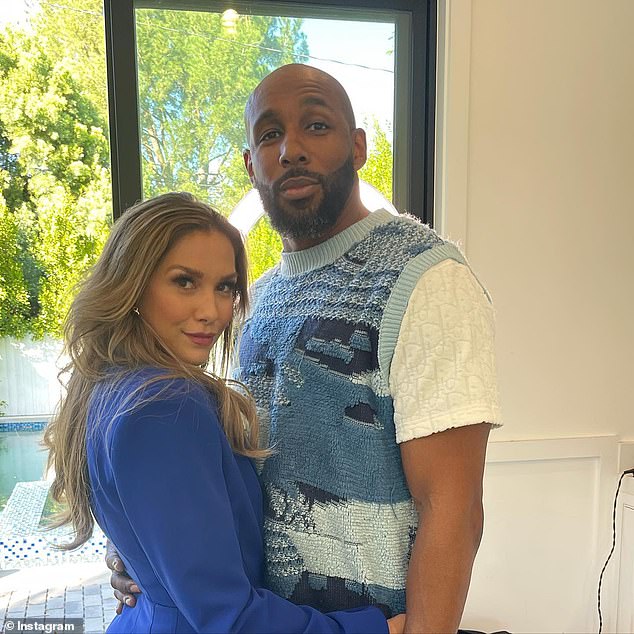 Allison said in a statement to People: 'It is with the heaviest of hearts that I have to share my husband Stephen has left us.

'Stephen lit up every room he stepped into. He valued family, friends and community above all else and leading with love and light was everything to him.

'He was the backbone of our family, the best husband and father, and an inspiration to his fans.

'To say he left a legacy would be an understatement, and his positive impact will continue to be felt.

'I am certain there won't be a day that goes by that we won't honor his memory. We ask for privacy during this difficult time for myself and especially for our three children.' 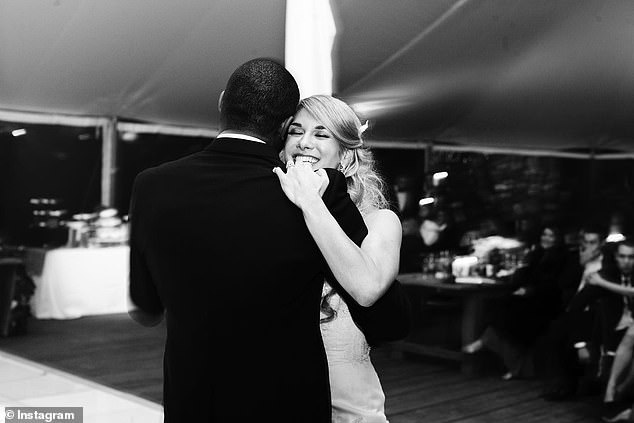 The couple celebrated their ninth wedding anniversary just three days before the tragedy, with Allison and Stephen both posting a heartfelt message online 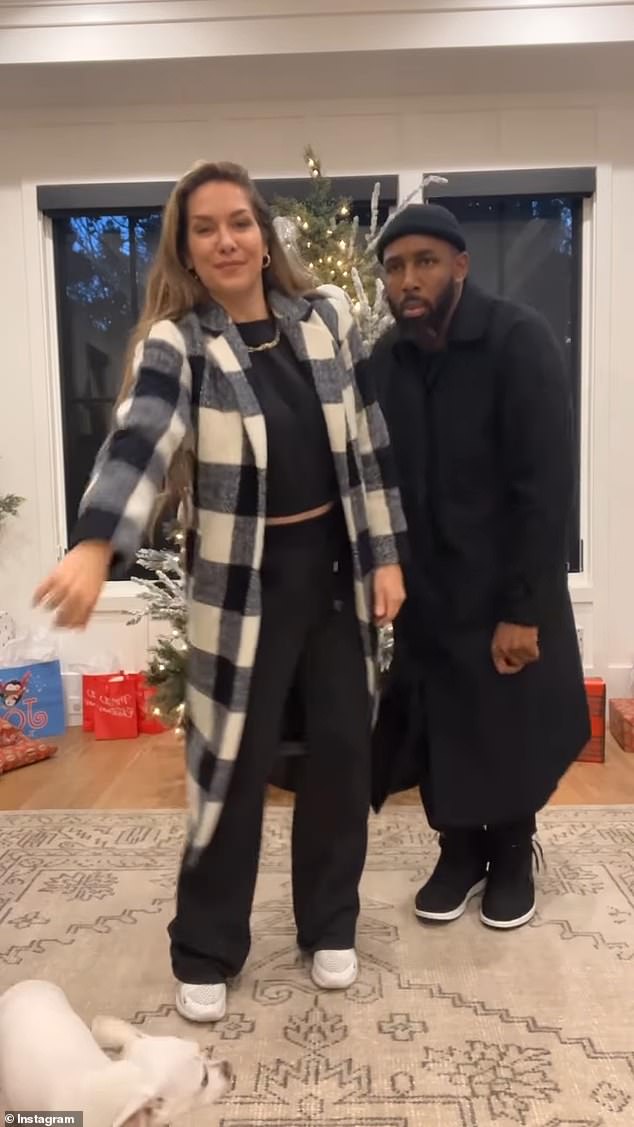 Boss posted a video with his wife Allison Holker just two days before his death, with the couple dancing in front of a Christmas tree 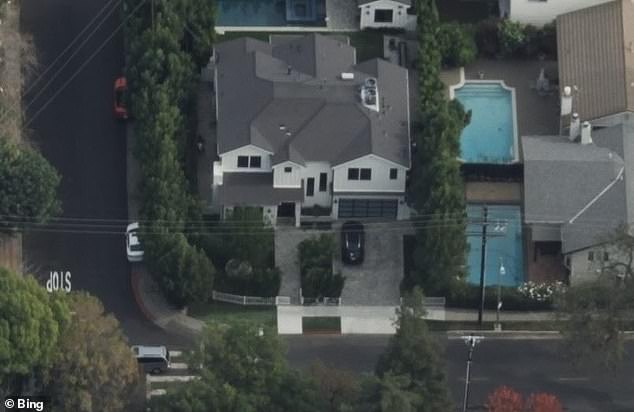 'Stephen, we love you, we miss you, and I will always save the last dance for you.'

His death comes months after Ellen paid tribute to her ex-partner Anne Heche, who died after crashing her car into an LA home with cocaine in her system - becoming trapped in the blaze for 45 minutes before passing away in hospital.

An LAPD spokesman confirmed to DailyMail.com that the incident was being handled by the LA County Coroner's office as there were no signs of 'foul play'. 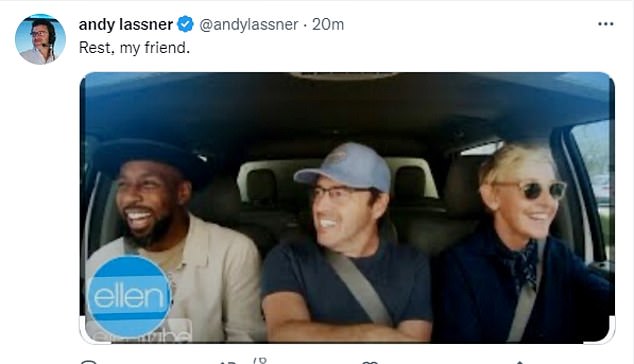 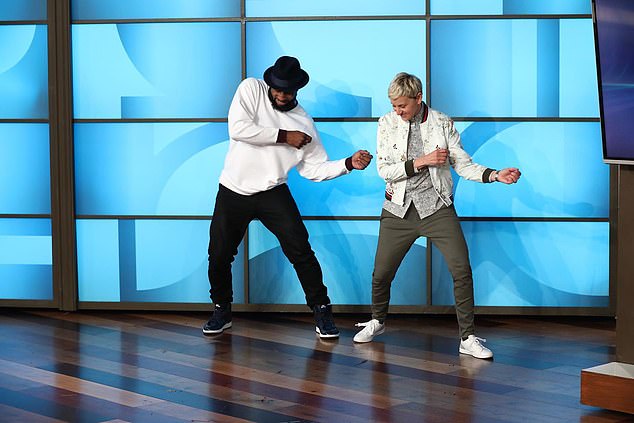 He competed on So You Think You Can Dance in 2008,where he came runner-up, later returning as an All-Star, and then as a judge in 2022 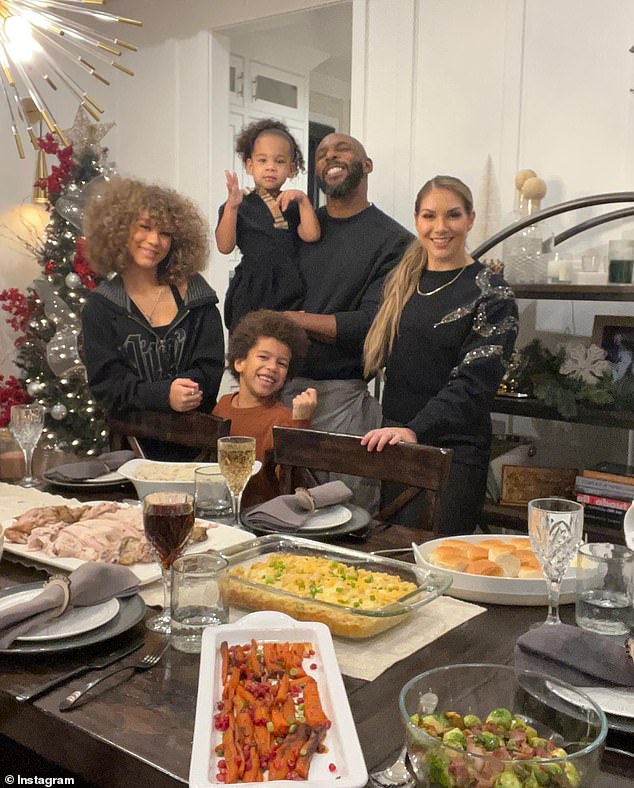 Seen publicly for the last time in September, Boss admitted to missing the Ellen show - which he said 'made it's mark on history.'

He added: 'Life has been great, man. We've been having, honestly, a lot more time at home, kids are back at school, life is beautiful man.

'There will be nothing like that show ever again. It definitley made its mark on history and it was one of the greatest places to be in the afternoon.'

The couple also posted a video on their YouTube channel, appearing happy, for a beginners dance cardio workout two days before his death.

Boss started as a DJ on the show after breaking into showbiz on MTV's The Wade Robson Project, before becoming a runner-up on Star Search. 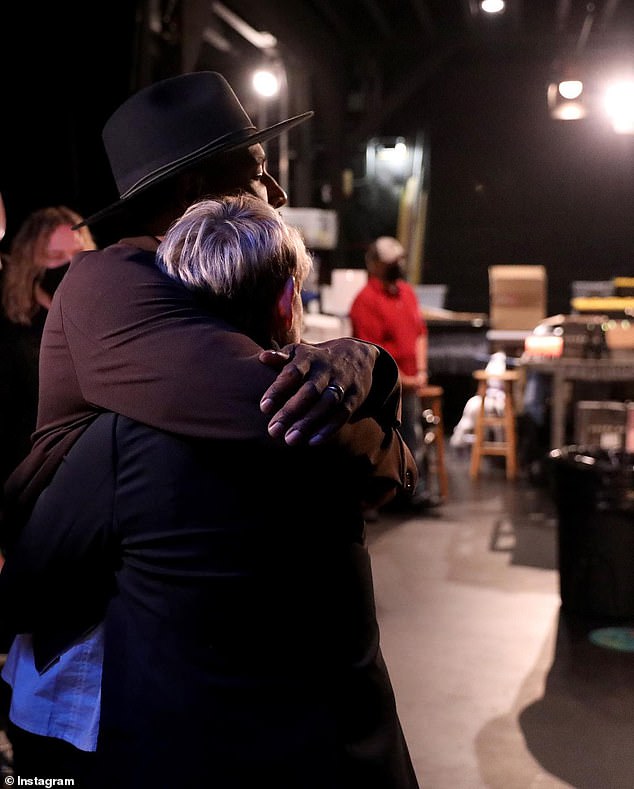 Ellen said she was heartbroken by the death of her friend, who she described as 'family'

He later competed on So You Think You Can Dance in 2008, where he came runner-up, later returning as an All-Star and then as a judge in 2022.

Ex-executive producer of the Ellen show, Andy Lassner, paid tribute to Boss, saying: 'Rest, my friend,' along with a picture of the two of them and DeGeneres.

The Ellen show was canceled earlier this year amid claims of bullying and a 'toxic workplace,' with the final episode airing on May 26.

Boss spoke about the criticism of the work culture at the Ellen Show, defending her until the very end.

He told US Weekly: 'We can't speak too much legally about it, but I'll say this: there's been love.

'Obviously there's some things to address, but from my standpoint and from countless others, there's been love.

'I'll just leave it at that until there's a time where we can address more publicly. There's been love and there will continue to be love.' 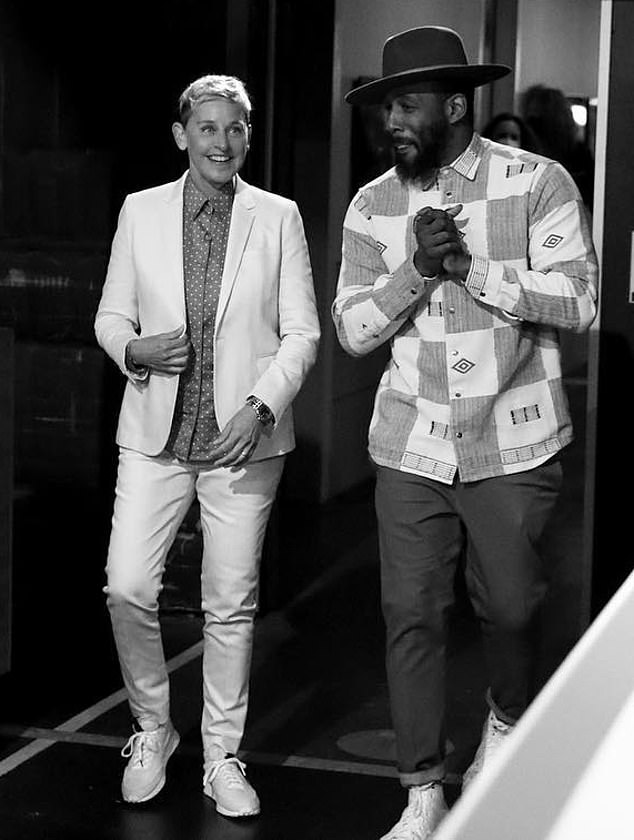 In 2020, at least ten former and then-current employees of the Ellen Show claimed they had faced bullying and racism behind the scenes.

The show, which ran from 2003 to 2022, built a brand around the compassionate slogan 'Be Kind,' often touted by the show's namesake.

Staffers who had first-hand knowledge of the day-to-day goings on of production, however, said the charitable endeavors and sloganeering were 'all for show.'

Employees leveled much of the blame against executive producers, but claimed Ellen herself had not been involved enough to see what was happening on in her own show.

Months after the first claims surfaced, DeGeneres gave an interview, in which she said the attacks on her 'did feel very misogynistic.'

'It was devastating. I am a kind person. I am a person who likes to make people happy,' she said, adding that she understood how people - even fans of hers - might come to believe that the allegations about her personal behavior were true.