London police forcibly entered a Soho art gallery thinking they were going to save a woman slumped over a table, only to find the woman was a piece of art.

The London Metropolitan Police Authority confirmed the incident in a statement to Insider. Police received a call on the evening of Friday, November 25 from someone concerned there was a person, unconscious on a table, who had been locked inside the Laz Emporium.

Twenty minutes later, the police broke down the door to enter the gallery to discover the woman was a sculpture.

"Hannah [Blakemore] who was working in the gallery that day had just locked up and gone upstairs to make a cup of tea," Steve Lazarides, Banksy's former agent and founder of Laz Emporium, said in a statement shared to Insider. "She came down to find the door off its hinges and two confused police officers!" 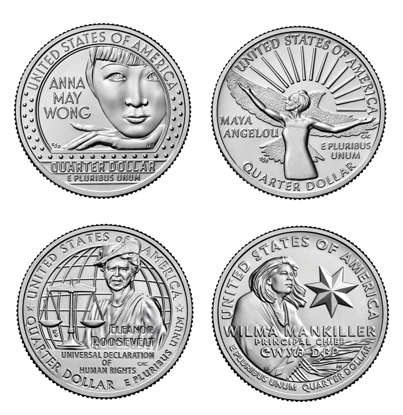 1 of 11 Photos in Gallery©United States Mint

Heads up: The next US quarter will feature the first Asian American to appear on a circulating coin in the US.

Starting on Monday, Chinese American movie star Anna May Wong will appear on the reverse side of the quarter, as part of the American Women Quarters Program.  Wong, who died in 1961, will be the fifth woman honored this year, following poet Maya Angelou, astronaut Sally Ride, Cherokee Nation leader Wilma Mankiller, and suffragist Nina Otero-Warren. Each of the special quarters features a right-facing portrait of George Washington on the front.

The American Women Quarters Program is a four-year initiative, overseen by the United States Mint, that started in 2022. The quarters highlight women who have contributed to the development and history of the country through their work in fields like suffrage, civil rights, abolition, government, humanities, science, space, and the arts. The US Mint will release five new coins in the series each year.

"It matters to have women on U.S. currency because our currency should reflect our nation and the stories of our American people," a US Mint spokesperson told Insider. "Women have made great contributions to our country and it is vital that we recognize those contributions on our coinage."

There will be 320 million quarters released per honoree and distributed all over the country, a US Mint spokesperson told Insider. People can purchase quarter rolls from the US Mint website or request them from their local bank and credit union.

Michele Selene Ang, a Chinese American actor and filmmaker, has watched Anna May Wong's films and takes inspiration from the late actor's resilience and ability to elevate what could be hollow roles into characters with full lives, Ang told Insider.

"I think her life is a great example of incredible bravery and resourcefulness," Ang said. "She found ways to grow outside of the American studio system as an artist and as a woman."

The sculpture, titled "Kristina," features a disheveled woman in a yellow hoodie and black tights with her face down in a bowl of soup.

Blakemore told ArtNet news that the piece has fooled observers before. Emergency services had been called for "Kristina" in October while it was on display at an interior design fair known as Decorex.

The sculpture, commissioned by Lazarides, is meant to portray his sister, also named Kristina. The piece was created by American artist Mark Jenkins, known for his hyper-realistic human casts.

"I wondered if the police were going to pay for the door," Jenkins told Insider in an email when asked about his reactions to the news.

The realistic look to his art is achieved by creating casts of real people and placing them in sedentary positions, Jenkins said. The "Kristina" sculpture is made with packing tape and foam filler, according to the press release.

Jenkins said he has a lot of stories of people mistaking his art for actual humans but never heard of anyone breaking into a private space because of his work, let alone an art gallery.

As for what Jenkins hopes art enjoyers take away when seeing "Kristina" he said: "The holiday spirit mostly."

"Kristina" will be on display at Laz Emporium until December 24