THEY are both stunning beauty queens who boast millions of admirers all over the world.

But in a very modern love story, Miss Argentina and Miss Puerto Rico have revealed they have tied the knot — after a secret relationship of 20 months.

But they kept their romance under wraps until earlier this week, when they stunned fans by simultaneously posting a video announcing their marriage.

The 30-second montage on Instagram shows the pair kissing and cuddling in exotic locations around the world, rose petals spelling “te amo” (meaning I love you), and a romantic proposal with flowers, candles and gold balloons spelling out “marry me?”.

The final clip shows Mariana and Fabiola dressed in white and kissing outside a register office in Puerto Rico as the song Lugar Seguro (meaning Safe Space) plays. 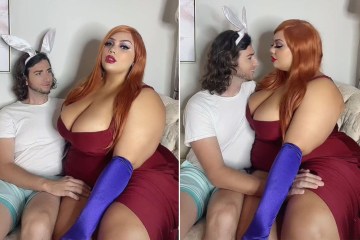 The joint post was captioned: “After deciding to keep our relationship private, we opened the doors to them on a special day,” naming the date as October 28.

The couple were flooded with congratulations by online followers — numbering more than 415,000 in total — who were stunned by the revelation.

‘God had a gift planned for us’

MOST READ IN FABULOUS

I wore a Halloween tattoo & it won’t come off, I’ll have to go to work like this

TOP OF THE CROPS

While they have only just gone public, the glamorous couple were dropping hints about their whirlwind romance as early as April 2021 — a month after they made the top ten in the Miss Grand pageant.

Under a picture of the bikini-clad pair hugging in the sea and holding hands in the Thai resort of Phuket, Fabiola wrote: “One of the great gifts in this experience was your friendship. Walking this process with you was a special and real one. Miss you, my girl @marianajvarela.”

Mariana posted the same pictures with the caption: “I miss u @fabiolavalentinpr.”

The couple had similar journeys to the fateful MGI finals in Thailand.

Mariana started modelling as a teenager and completed a degree in her native Buenos Aires before being crowned Miss Universe Argentina in 2019 and Miss Grand Argentina the following year.

Fabiola, born in Camuy, started modelling while studying journalism at university. She won the Miss Universe crown for Puerto Rico in 2019, followed by the Miss Grand Puerto Rico title in 2020.