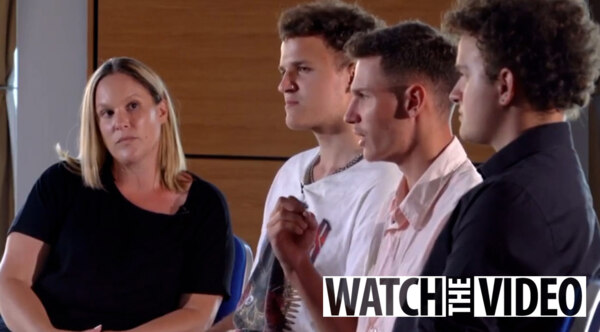 A MUM has told how she stabbed a paedophile to death after he sexually abused her kids.

Sarah Sands stabbed Michael Pleasted, 77, eight times in 2014 in a "determined and sustained attack" which saw him bleed to death.

Pleasted was already a convicted paedophile and had changed his name from Robin Moult to conceal a long past of offending against children.

And Sarah's three children then told her that he had abused them - and she took matter into his own hands.

Ms Sands told BBC Breakfast: "For paedophiles, if you touch children, there has to be consequences.

Now her brave boys, who have now waived their anonymity, have told how they thought their mum was a hero for killing their abuser.

Alfie added: "It did make us feel safer. It didn't slow down the nightmares. But it did give us a sense of security because you didn't have to walk down the street thinking he was going to come around the corner.

"He lived literally across the road from us. I could open that window over there and I'd see his house."

Dad reveals agony after daughters, 1 and 3, killed in horror fire with mum

But nobody knew of Pleasted’s vile past because he had changed his name and his crimes pre-dated the sex offenders register.

Ms Sands was convicted of manslaughter on the basis of loss of control after an Old Bailey trial in 2015, and eventually jailed for seven and a half years after having her sentenced increased by the Court of Appeal.

She said she originally intended to threaten Pleasted, who was on bail awaiting trial, to make him plead guilty so her children did not have to give evidence in court.

She said: "Once they have changed their names, they are able to get a new driving licence and passport in that name. That enables them to get a new DBS check.

"And we are finding that these people are then going into schools and other places where there are children and vulnerable people and exploiting their positions of trust in the most horrific ways."

The Home Office said it has already carried out a review of the issue and the UK already has strict rules in place to deal with sex offenders living in the community.