I THOUGHT SHE WAS AT LEAST BI-

SHE has already exposed every body part known to man, bragged about using drugs, dated men decades her junior and simulated oral sex.

But Madonna’s latest attempt to keep herself in the limelight by claiming to be gay is her most ridiculous bid for attention yet.

The 64-year-old superstar made a bizarre ten-second video on TikTok in which she appears to come out.

Captioned “If I miss, I’m gay”, the clip shows Madonna throwing a pair of pink knickers at a bin — and missing.

It was viewed more than 16.7million times within 17 hours of being posted and has racked up almost 15,000 comments from puzzled followers.

But the attention-seeking trick feels like rock bottom for Madonna, who is single-handedly ruining her legacy as pop’s most influential icon. 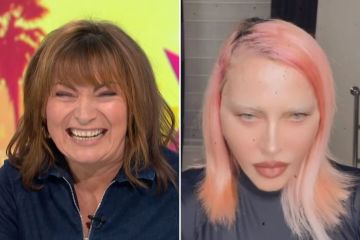 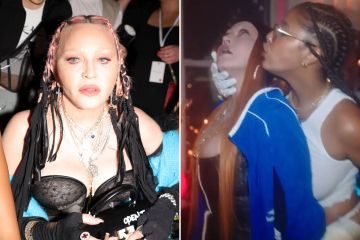 Of course, gossip about Madonna’s dating life has swirled around her for decades, with a long list of famous male exes including Michael Jackson and rapper Tupac Shakur.

She has had failed marriages with actor Sean Penn, 62, and Lock Stock director Guy Ritchie, 54, while her three-year relationship with 28-year-old toyboy dancer Ahlamalik Williams ended in April.

In 1992 — a couple of years after stating “everybody has a bisexual nature” — she fell out with Sandra Bernhard after she allegedly had a fling with her actress pal’s girlfriend Ingrid Casares.

Then she famously kissed Britney Spears and Christina Aguilera as part of her performance at the MTV VMAs in 2003.

BBC Breakfast viewers have a big complaint about host's outfit

None of that exactly supports her latest claim, though, and fans have accused her of “queer-baiting” by pretending to be gay.

One commented: “Madonna queer baiting for relevance in 2022 is not something I expected.”

Perhaps she really has decided that she is now only sexually attracted to women.

But as someone who has millions of LGBTQ+ fans and has performed at Pride events internationally, you would think she may have come out in a more respectful way.

Unless, of course, she was simply making things up to get people talking.

Meanwhile, many fans have been concerned about her ever-changing face, as seen in the TikTok clip.

Even Lorraine Kelly, one of the nicest women on telly, slated her appearance on yesterday’s episode of her ITV show.

She said: “Is that actually Madonna? I don’t recognise her!

“Honestly, what’s she done? She was so beautiful. Why, why, why do women do this to themselves?

Millions of her adoring fans will agree, as the once-groundbreaking singer continues to destroy her legacy and image.

It is part of a desperate decline into attention-grabbing nonsense which makes even Katie Price look like a shy and retiring type.

Fans are desperate to see her return to being the world’s most groundbreaking and revolutionary pop star, who has inspired artists for decades.

But younger generations are now seeing a tarnished legacy of a woman who seems intent on stooping to embarrassing stunts in order to hang on to a semblance of relevance.

I’m not saying that at her age, she ought to be sitting back with a cuppa and watching Pointless.

As an undisputed megastar, she could easily build on her incredible career by working on new music or going on a world tour.

Instead, her focus is on shock tactics to get people talking about her — which is only driving her further and further away from the A-list status she deserves.

I have been a lifelong Madonna fan, spending hundreds on concert tickets and hungrily studying every album she has released.

During lockdown, my housemates even started to mock me for the amount of time I spent rewatching her old performances on YouTube.

But more recently I and many others have been left cringing at her increasingly baffling social media posts.

They frequently feature her looking heavily airbrushed in all sorts of explicit poses.

In May, Instagram even banned her from doing live broadcasts on the platform after she repeatedly broke the app’s rules regarding nudity.

She said sarcastically at the time: “It’s weird. They’re being really mysterious about why — they’re not giving me a reason.

“I haven’t done anything lately, nothing crazy this week anyways.

“I’ve never worn so many clothes in my life.”

On top of that, she has risked ruining her iconic musical legacy with a series of remixes and remakes of her hits which have done nothing but turn off her fans.

Those have involved desperate stunts too, with Madonna most recently teaming up with a Dominican OnlyFans personality called Tokischa on a new version of the 2005 No1 single, Hung Up.

Funnily enough, that edition of the track didn’t trouble the charts.

Speaking in July, she said she wants to celebrate her 40-year back catalogue, telling Variety: “I’m just looking for interesting, fun ways to re-release my catalogue and introduce my music to a new generation.

But many feel she is better off protecting her legacy and having some dignity rather than attempting to emulate modern pop stars.

The next potential catastrophe for Madonna’s once-soaring career is likely to come in the form of her troubled biopic, which is provisionally titled Little Sparrow.

Oscar-nominated co-writer Diablo Cody dropped out of the project after she was rumoured to have butted heads with the stubborn star.

She was replaced by playwright Erin Cressida Wilson — but despite several script rewrites and being in the works for years, the troubled movie is still nowhere near production.

Sources working on the project have said they fear the entire movie is doomed because of Madonna’s increasingly unconventional vision.

It has become such a self- indulgent adventure for Madonna, who plans to direct the film, that some fear it will never see the light of day.

And if the movie is eventually released, there are even doubts whether it will be a commercial success.

Emmy-winning Ozark actress Julia Garner was reported to have been offered the opportunity to play Madonna on screen, but who could blame her if she decided against it?

They must live incredibly privileged lives.

But if we are cringing at their mum’s capers, I dread to think how they feel when they log on to social media.