Jennifer Lopez wants fans to stop posting that video of her serenading Ben Affleck at their Georgia wedding.

In the clip, which was originally posted by TMZ, Lopez is seen singing and dancing in one of her Ralph Lauren gowns as Affleck sits in front of her in a chair. It sounded like Lopez was singing a new, special song with the hook, "Can't get enough." After the video made headlines, the triple threat spoke out on Instagram and said the video was "stolen" and sold to the media by a wedding guest, all of whom signed a nondisclosure agreement (NDA).

"This was taken without permission. Period. And whoever did it took advantage of our private moment," Lopez commented on a fan account. "I don't know where you all are getting it from bc we had NDAs and asked everyone to not share anything from our wedding. That is our choice to share. Anything I put out private is OnTheJLO and it's to share w my fans. Which I will do when I am ready to. This was stolen without our consent and sold for money. Thank you for caring I love you guys."

Lopez and Affleck legally tied the knot on July 17 in an intimate wedding in Las Vegas. They threw a much larger celebration at the actor's estate in Riceboro, Ga. last weekend. It's apparently where they were supposed to get married almost 20 years ago when Lopez and Affleck first dated. 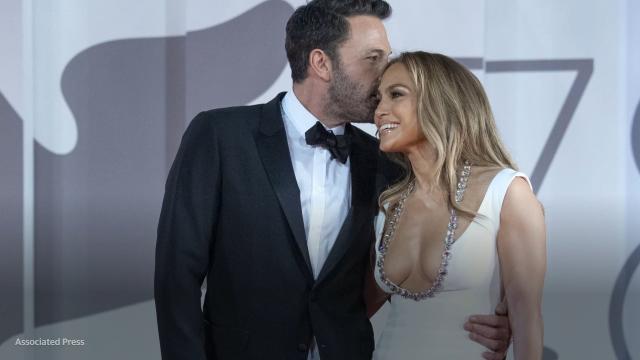 Jennifer Lopez is sharing official wedding photos after saying "I do" (again) to Ben Affleck.

One of Affleck's close friends, filmmaker Kevin Smith, has had a front row seat to Bennifer's relationship over the past two decades. He was among the guests at the couple's second wedding on August 20.

"I was so overwhelmed by the wedding itself," Smith told Yahoo Entertainment. "I'm a big fat romantic at heart, so I love love. And they've got a fantastic love story that now has this beautiful ending – not ending, beginning, almost. They stuck the landing, closed the circle, so to speak."