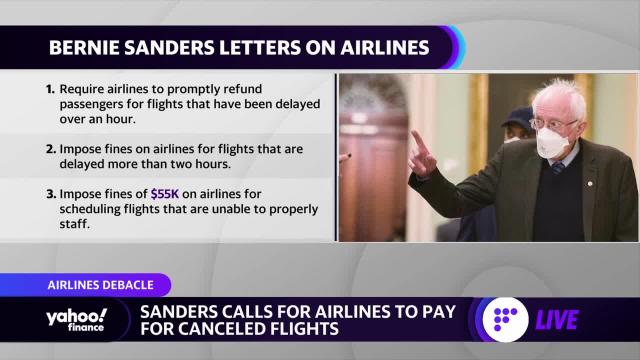 Sen. Bernie Sanders (I-VT) bashed airlines for recent travel disruptions, and called on them to start reimbursing their customers for cancellations.

Air travel in the United States has been a mess of cancellations, delays and confusion in recent months as short-staffed airlines struggle to keep up with travelers looking to make up for two years of missed vacations caused by the pandemic.

Between Thursday and Monday alone, more than 2,200 flights across the country were canceled and more than 26,000 were delayed, according to the flight tracking service FlightAware. Those disruptions came as airports dealt with the highest volume of travelers they’ve seen since the start of the pandemic. The Transportation Security Administration processed nearly 2.5 million people on Friday, the most in a single day since February 2020. As chaotic as the July 4 weekend was for travelers, it was actually smoother than some other recent holiday periods.

Last month Transportation Secretary Pete Buttigieg met with airline executives to urge them to “scrutinize” schedules to complete as many flights as possible during peak summer travel season. Several major airlines have reduced their daily flight offerings in an effort to limit the number of cancellations and delays.

The core of the problem, experts say, is that while the number of travelers has bounced back close to pre-pandemic rates, staffing levels have not. Despite receiving $54 billion in pandemic relief funds to help retain employees, airlines are still scrambling to fill their ranks with enough pilots, flight attendants, baggage handlers and customer service representatives. Airlines have also blamed disruptions on staffing shortages at air traffic control, which is run by the Federal Aviation Administration, though the agency denies the claim.

Most experts say there’s no quick fix to resolve airlines’ staffing shortages because of the tight labor market and the lengthy training period needed to get critical workers up to speed — especially pilots.