well as i said

As i have said many many times .....there is no  shortage of fools /commoners / idiots ....uneducated grunts in america ........look!!....what sort of fool takes the lives of someone over stupid plastic sign with a name on it .......i cannot believe people steal signs because of  another  affiliation.....its not the root cause  there is something deeper than this going on ......mentally imbalanced  i mean .....how  can a human being let an inanimate object control his/her thoughts feeling .....that's the sad part ......unless its drugs obviously ....so sane person would let an inanimate object control them on any level .......its that simple .....

Three teenagers were shot and hospitalized in Topeka, Kansas, this weekend following a dispute over stolen Trump lawn signs, according to local news station WIBW.

Police responded to a report of gunshots on Saturday night and found one of the teens shot several times, WIBW reported. Later that evening, two other teens showed up to the hospital and they, too, had been shot, according to the station. 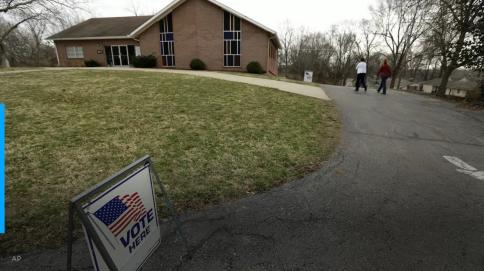 "We ask for the community's patience as investigators diligently work to determine the facts surrounding this case," Gretchen Spiker, a spokeswoman for the Topeka Police Department, told WBTV. "No arrests have been made as of this writing. Arrests may be forthcoming pending the outcome of the investigation."

Police told the Topeka Capital-Journal on Sunday that a man had shot the teens because he believed they were responsible for his missing signs.

One of the victims was taken immediately to a hospital with life-threatening injuries and the other two arrived at the hospital of their own volition, the Capital-Journal reported.

The shooter, who has not been identified by name, told police that he was nearly run over by a car on Saturday.

Two separate Topeka police reports associated with the Saturday shooting give conflicting reports of what happened, according to the Capital-Journal.

In one report, police said the three juveniles had been the victims of aggravated battery and the criminal discharge of a firearm.

The teens ranged in age from 15 to 17, WBTV and the Capital-Journal reported.

In the second report, two men — Robert Sinner II, 39, and Justin Sinner, 34 — were identified as the victims of aggravated assault by a motor vehicle after they said they were nearly struck by a car.

Neither of the Sinners has been identified by police as someone responsible for shooting the teens, but both reported incidents — the shooting and the alleged assault by car — occurred at the same time and place, according to the Capital-Journal.

WBTV reported that no signs had been reported stolen on Saturday.

Incidents of political violence and scare tactics have been reported around the country in the days ahead of the election.

Over the weekend, two severed deer heads were discovered on properties that displayed Joe Biden signs in Oregon.

In Texas, a convoy of Trump supporters surrounded a Biden campaign bus. The convoy later crashed into a car.

The FBI announced an investigation into the incident, prompting Trump to defend his supporters.

"In my opinion, these patriots did nothing wrong," Trump wrote on Twitter in response to the investigation.